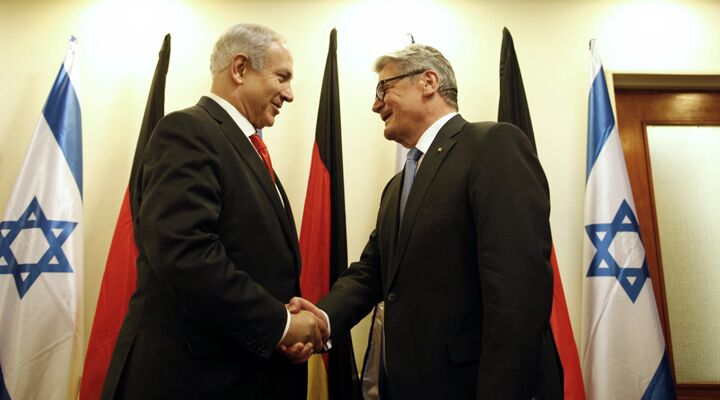 As America’s presence in the region shrinks, Germany is quietly filling the vacuum.

Give Germany credit. As America unwisely abdicates its leadership role in the Middle East, Berlin is quietly and steadily positioning itself to play a decisive role in the future of this important region. Right now, German foreign policy in the Middle East isn’t controversial, overtly dramatic or eye-catching. Especially not compared to events in Egypt, Gaza, Syria and Iran.

But you watch: Germany is about to emerge as the key player in the Middle East.

Germany’s presence in the Middle East, politically, commercially and militarily, is probably more significant than most people realize. Germany contributes to the war in Afghanistan largely because, as Ron Fraser has explained, doing so gives Berlin a military toehold on Iran’s eastern flank. German naval forces are patrolling the waters off the Horn of Africa, and German naval vessels are also patrolling Lebanon’s coastline as part of the United Nations Interim Force in Lebanon (unifil). Germany is selling military hardware, tanks, weapons, missiles and the like to multiple Gulf States. More recently, Germany has stepped up its involvement in Syria’s civil war. Berlin recently said it’s ready to send surface-to-air missiles to Turkey (to defend itself against Syria) and will dispatch up to 170 Bundeswehr personnel to operate these missiles. Earlier today, Germany defied its European peers and stated that it would not support the bid to upgrade the Palestinians status at the UN. In nearly every instance, Germany is assuming a responsibility that America has shirked or is in the process of shirking.

When it comes to leading the Middle East, and in particular, supporting Israel and opposing Iran and its radical Islamist allies, Germany is the new America!

This is the context in which we must view Germany’s participation in the recent Israel-Hamas conflict. From the moment war broke out, Berlin made it clear whose side it was on. On November 16, a spokesman for the German government expressed empathy for Israel and placed blame squarely on Hamas. “Hamas in Gaza is responsible for the outbreak of violence,” spokesman Georg Streiter told reporters. “There is no justification for the shooting of rockets at Israel, which has led to massive suffering of the civilian population.” Streiter also stated that Israel’s government had the “right and obligation” to protect its population.

On November 25, Germany’s chancellor restated Berlin’s position and pledged moral and political support to Israel. “Every country has the right to defense, self-defense and the protection of its citizens,” Angela Merkel stated. The chancellor later stated sovereign governments don’t merely have a right to protect citizens, it is their moral and political duty.

On November 19, two days before Secretary Clinton arrived in the region, Germany’s foreign minister, Guido Westerwelle, traveled to Israel to meet with both Israeli Prime Minister Benjamin Netanyahu and the Palestinian president. Following his meeting with Netanyahu, Westerwelle said brokering a ceasefire is a top priority for Berlin. Israel’s prime minister was encouraged by the visit and invited Berlin to play a key role in peace talks. “I believe that Germany can have a constructive role in seeking an end to this conflict and a long-term arrangement, such that these terror weapons are not introduced into the Gaza Strip,” he stated.

From the moment the war started, Germany’s position was clear and consistent: Hamas initiated the war, and Berlin would stand by Israel as it exerted its right and responsibility to defend itself.

Compare Berlin’s response to that of the White House, which, as Stephen Flurry recently noted, pledged support for Israel initially, but within a day or two had begun sending signals that Israel needed to pull back its Gaza campaign.

Even now, with the war over and a cease-fire in place, Germany remains interested. On Tuesday, Süddeutsche Zeitung, a popular German-language paper, cited a report from the German foreign ministry that said Berlin continues to monitor the situation closely, and is seeking the “rapid reactivation” of the European Union Border Assistance Mission (eubam) at the Egypt-Gaza Rafah border crossing. (eubam existed for two years between 2005 and 2007, and ended when Hamas took power of the Gaza Strip.) Germany wants a EU contingent stationed at the crossing to stop the flow of weapons into Gaza. According to Zeitung, the German foreign ministry document distributed to EU member countries this week stated that “a special European force must be activated for the mission.”

Consider too: While the news of a possible EU mission at the Rafah crossing only broke this week, the purpose of the proposed mission gels almost perfectly with a statement made by Israel’s prime minister nearly 10 days ago following his meeting with Germany’s foreign minister. On November 19, Netanyahu stated, “I believe that Germany can have a constructive role in seeking an end to this conflict and a long-term arrangement, such that these terror weapons are not introduced into the Gaza Strip.”

Add it all up, and it appears this week’s plan for a EU border mission was quite likely formulated by Germany and Israel during the height of the recent war. If this is true, then this suggests some significant realities. First, it indicates that the German-Israel relationship is stronger and more advanced than most people know. Second, it shows that Israel clearly believes Germany possesses the desire and the means to preserve and defend Israel’s interests. Third, it indicates that Germany is replacing America as Israel’s go-to ally in the region.

If you’ve been reading the Trumpet for a while, you probably know the prophecy well. We find it in Hosea 5:13: “When Ephraim saw his sickness, and Judah saw his wound, then went Ephraim to the Assyrian, and sent to king Jareb: yet could he not heal you, nor cure you of your wound.” The “wound” here, as Gerald Flurry has explained, refers to Israel’s peace process with the Palestinians. Like an infected wound that weeps and oozes and won’t heal, Israel’s “land for peace” process grows more and more painful, even to the point of jeopardizing the health of the body. Eventually, as it becomes painfully obvious that peace is impossible—and with the Jewish state likely facing annihilation from Iran, Egypt and their radical Islamist proxies—Israel (biblical Judah) turns to Assyria (biblical Germany) for help and protection.

This, in essence, is exactly what has happened over the past few weeks!

Just watch and see: Regional trends are only going to intensify and accelerate Israel’s reliance on Germany and Europe. Think about it. The peace process has not only failed spectacularly, it has actually strengthened the position of Israel’s enemies. Radical Islam—be it in the form of Hamas or Hezbollah, or states like Iran, Egypt and Libya—is quickly encroaching on the Jewish state, making further conflicts like the recent one inevitable. Next, Israel’s relationship with America, once a powerful ally, is at its lowest point in decades, and will only deteriorate under four more years of the current administration. Meanwhile, Germany is steadily developing a stronger reputation and presence, politically and militarily, throughout the Middle East, and is emerging as an increasingly capable opponent of Iran and radical Islam.

Sadly, there’s no indication it’s about to turn to God.