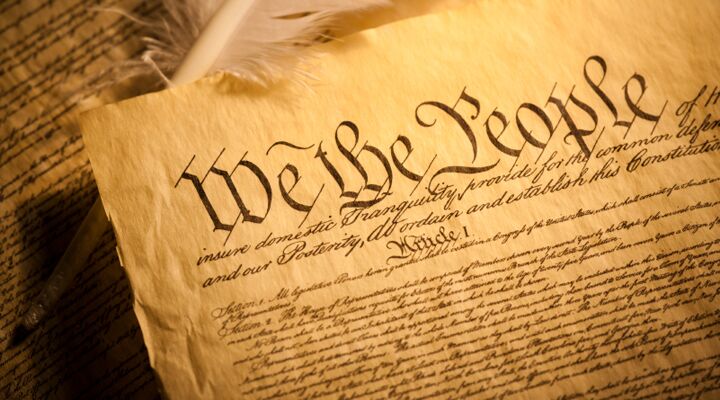 On Thursday, March 31, 1983, President of the University of Southern California James H. Zumberge and dean of usc’s Law Library Scott H. Bice officiated at a special and historic ceremony that took place in the campus Law Center. In attendance were usc law scholars, local attorneys and federal judges.

“People throughout the nation, indeed throughout the entire world, are familiar with the ministry and accomplishments of Herbert W. Armstrong,” the president stated. He went on to note that he was known as an “ambassador for world peace.”

“He has met privately with such leaders as Prime Minister Margaret Thatcher of Great Britain, Prime Minister Menachem Begin of Israel, Prime Minister Indira Ghandi of India, presidents Anwar Sadat and Hosni Mubarak of Egypt, King Hussein of Jordan and the king of Thailand, all in an effort to further world peace and religious liberty,” Mr. Zumberge added.

In acceptance of the honor, Mr. Armstrong responded: “Mr. President, ladies and gentlemen, you might wonder what I, a minister of Jesus Christ, might have to do with constitutional law and something of this sort.”

He went on to recall that when he was 5 years old, as a result of the incessant questions he would ask his father, that he told young Herbert that he’d become a Philadelphia lawyers when he grew up.

Mr. Armstrong outlined the world paradox of awesome progress and yet appalling evils besetting mankind at every turn. He noted his acquaintance and discussions with members of the World Court in The Hague in resolution of these global crises, highlighting man’s inability to resolve his problems.

He outlined their origin, reminding his audience of the first humans in Eden’s garden and how they chose for themselves right and wrong—that which they felt was good and evil.

“Now the basic book of constitutional law states that the basis of all law is a simple word, L-O-V-E, love,” he said. He defined the get way in direct opposition to love and the way of give.

“I may be an ambassador for world peace—I do what I can. But we’re not going to have peace in the world—there’s no need of kidding ourselves—until human nature is changed and until the spirit and attitude of love instead of hate and competition, of cooperation and give enters in, instead of get, and competition, and strife, and self-motive.

“But all human rights are based on the law I found in this book, the Holy Bible. And I wonder if people realize that. The law of love: Thou shalt love thy neighbor as thy neighbor as thyself. There is so little of that in this world.”

He told the honored assembly that the book of Revelation speaks of the true Church established by Jesus Christ spanning seven “epochs,” identifying that time period in 1983 as the Philadelphia era. He cited sin as the transgression of law and that Christ had to die to pay the penalty of sin. He told them God’s law was a “way of life.”

Mr. Armstrong concluded, “I came to be the leader in the Philadelphia era of that Church. So here I am among lawyers and in a university with such a great reputation in its law school, as a Philadelphia lawyer. Thank you very much ladies and gentlemen.”

Thereafter, Larry D. Simon was installed as Herbert W. Armstrong professor of constitutional law. After acknowledging his professorship’s namesake, he said, “If you sense any similarities between what I’m about to say and what Mr. Armstrong said—and there are some—you should know that it wasn’t staged to be that way. I’ve never met Mr. Armstrong before this moment.”

In his concluding remarks, dean of usc’s Law Library Scott Bice commented after Mr. Armstrong’s address how he thought “Albert Brecht, the director of the Law Library, had better be sure we have some extra copies of the Bible ordered, because it’s even more relevant than it was before these two talks.”

Today, usc’s library catalog cites “Call #KF292.U55 C45 1983a” as the documented record of this historic day and establishment of the Herbert W. Armstrong Professorship of Constitutional Law. Its law catalog also cites the professorship and course in Constitutional Law as #508. In addition, the university’s online catalog does identify a copy of the Holy Bible as being available to its students along with the following authored works of Mr. Armstrong: The Book of Revelation Unveiled at Last, Did God Create a Devil?, The United States and Britain in Prophecy and Who or What Is the Prophetic Beast?

The glaring omission from the Law Library is Mr. Armstrong’s final work, Mystery of the Ages. After his death in January 1986, amid the collapse of the empire he founded, Herbert W. Armstrong College (hwac) founder and chancellor, Gerald Flurry, led the charge to exercise the constitutional amendment guaranteeing free speech and freedom of religion by leading the fight to the highest court for this master literary work.

As the cadre of church administrators had betrayed Mr. Armstrong and now feared exposure, they settled with this publication’s sponsor out of court. However, the shocking account and six-year legal struggle was documented in Raising the Ruins, the compelling book authored by hwac President Stephen Flurry.

Today, as fruit of this victory against all odds, Mystery of the Ages is taught from by faculty and used as a core textbook for students, readily available in the Herbert W. Armstrong College campus library and book store. Furthermore, Mr. Flurry follows Mr. Armstrong’s example in teaching from the core constitutional source, the Bible, the Word of God, the foundation of all knowledge.

Should usc, its president, dean of law, department libraries, faculty, student body or you wish to receive your own free copy of this wonderful work which its author desired reach the largest audience possible, then request a copy now. You’ll be glad you did!