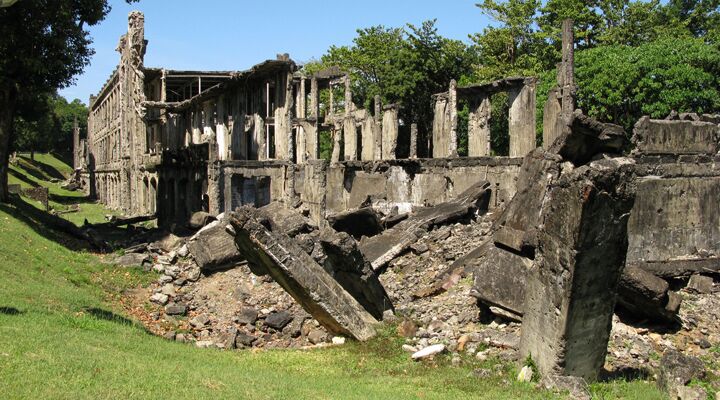 It jarred me, the way those hulking relics of war stood starkly against the tropical foliage. Demolished, pockmarked concrete—surrounded by beautiful, lush green plants. This is Corregidor, island of antithesis.

This small island fortress in the Philippines was the setting of some of the most dramatic scenes of World War ii. It simultaneously symbolizes bravery and betrayal, humanity and hatred, strength and savagery. Gazing across the scene, I was bombarded by incongruous images and emotions. But the biggest collision in my mind was between the epic past and the uncertain present.

After it captured the island from Spain in 1898, the United States built a major military outpost on Corregidor. “The Rock” bristled with guns and mortars, a total of 23 separate batteries. Yet Corregidor was also a soldier’s paradise, with a sandy beach, golf course, baseball diamond, opulent cinema, lavish officers’ quarters and excellent barracks housing thousands of men—all against the backdrop of the calm waters of Manila Bay.

Most of these impressive installations are still there. But now they are skeletons bearing the garish scars of the horrors they endured. Of those enormous barracks filled with soldiers, only empty concrete shells remain, interlaced with rebar that holds sagging chunks of staircases and walls aloft in twisted formations. Gaping holes and mounds of rubble mutely testify to the furious Japanese aerial bombardment. The theater is roofless and hollow. The swimming pool is a cavity carpeted with vegetation.

The ruins still reverberate with the voices of the soldiers who occupied these structures, who manned these munitions. Every blast hole brings to mind the men whose bodies were also blasted and battered when the bombs fell.

Buried in the center of the island lies Malinta Tunnel, a colossal bunker complex that the Americans drilled into a mountain over the course of a decade. The wide but dank passage now serves as the setting for an audio-visual show telling the story of its construction and use during the war: MacArthur turning it into usaffe headquarters; the Philippine government taking refuge there; and the unfolding of the most shameful chapter in America’s World War ii history—the “Betrayal in the Pacific.”

Ten days after attacking Pearl Harbor, the Japanese descended on the Philippines, America’s possession. President Franklin Roosevelt immediately proclaimed his “solemn pledge,” backed by “the entire resources in men and materials of the United States,” that America would come and safeguard the Filipinos’ freedom. MacArthur skillfully evaded Japan’s powerful clutches, evacuating U.S. and Filipino forces to Corregidor to make a stand until reinforcements arrived. But the “solemn pledge” was a blatant lie. The help never came. Allied forces on Corregidor eventually succumbed to Japanese butchery and surrendered on May 6, 1942.

The presentation well conveys the terror of those days with sounds of enemy planes buzzing outside, of bombings that shook the tunnels, of the voice of President Quezon lamenting, “How typical of America to writhe in anguish at the fate of a distant cousin, Europe, while a daughter, the Philippines, is being raped in the back room!” Then, the radio announcement from the Voice of Freedom: Despite the Allied forces’ “superhuman endurance … in the face of overwhelming odds,” “Bataan has fallen, but the spirit that made it stand—a beacon to all the liberty-loving peoples of the world—cannot fall!” It was galvanizing yet gut-wrenching to hear, knowing the hellish death march those captured soldiers afterward endured.

The next wave I felt was one of redemption, hearing how America partially atoned for its treachery when it fought back for the Rock three years later. On the island’s Topside hill is a field too small for an airborne combat landing zone. Yet this is where hundreds of daring men parachuted down from just 400 feet—descending directly into a cauldron of fierce, close-range warfare. These tough men, who knew both the nobility of sacrifice and the brutality of killing, were the liberators of Corregidor.

A short walk away is the Pacific War Memorial Museum. There I stared at the black-and-white portraits of the officers who had orchestrated the offensives and commanded the troops. They seemed like superior men. Serious, manly, steely, intelligent—men of character, men who inspired men. I felt small.

The stories of the Japanese Imperial Army evoked in me a different kind of wonder. Their warrior code of honor, Bushido, exalts death above surrender. In the Malinta Tunnel we learned what this means. That great bunker, which had survived intensive shelling throughout the war, in the end succumbed to sabotage from within: Two thousand Japanese soldiers stationed inside, knowing Allied troops were about to capture them, blew themselves up. Apparently this grim business was repeated in caves all over the island: After the U.S. reclaimed it, for days Corregidor reverberated with underground explosions of Japanese suicides. Haunting.

I tried to comprehend this conflicted past: noble and brutal, crucial and futile, eternal and long-gone. These ruins impressed me with what men did here, yet I could not escape the whole truth: Like every battlefield, this was just another horrid chapter in human war-making, another place where high rhetoric clashes with the low things human beings do to each other.

These ruins are oddly relevant to the present. Their hollowed hulks evoke the decline of America. As Moses prophesied long ago, the pride of its power has been broken and lies in rubble; only the facades remain. Three generations after what proved to be America’s last unequivocal military victory, the U.S. presence in the Philippines is only an echo. America’s reputation is mortally wounded; its ambition has shrunk. Its unprecedentedly superior military is oddly impotent against the most pitiful of threats. Today, an attack on an American consulate, rather than being soundly punished, sets off a rash of evasion, backbiting and recrimination that tears the government up internally.

It all makes Scripture’s most shocking prophecy seem far more conceivable: When the next world war breaks out, America will shrink all the more—and horror will spread over the globe virtually unchecked.

I walked beyond the memorial museum to a rotunda. There I saw words chiseled in stone that finally reminded me of hope: “Sleep my sons, your duty done … for freedom’s light has come. Sleep in the silent depths of the sea, or in your bed of hallowed sod, until you hear at dawn the low, clear reveille of God.”

I look forward to meeting them when that dawn comes.