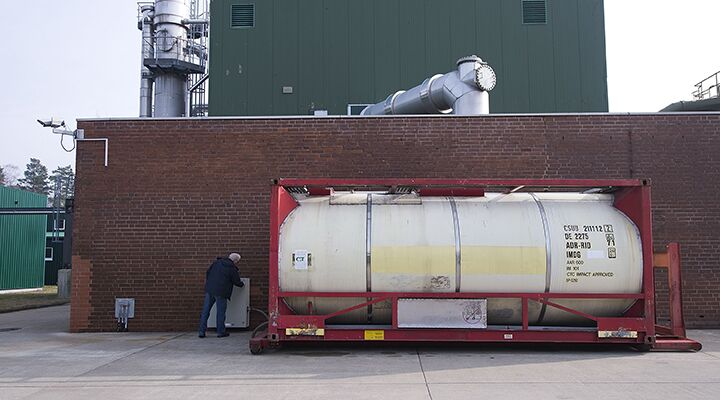 The Middle East is exploding with unrest and violence. But one situation in particular could cause a major catastrophe for the world, including the United States—and is being almost entirely overlooked by the media. It could be the deadliest mystery in the Middle East.

Western intelligence agencies are worried about Syria’s chemical weapons. They estimate that Syria has several hundred tons of chemical weapons at perhaps 20 or more sites throughout the country. They are most concerned about the deadly nerve agent, sarin gas. “Syria is thought to possess the world’s third-largest stockpile of chemical weapons after the United States and Russia …. Syria’s weapons, predominantly deadly nerve agents that can be delivered by artillery rockets, shells and aircraft munitions, were developed for use in a war against Israel” (Washington Post, September 6).

Syria has never been known to be a manufacturer of chemical and biological weapons. Where did it get all of these weapons of mass destruction?

Syrian forces have these wmd, and they could use them. President Bashar Assad’s regime has said that it might do exactly that against foreign attackers.

But something even more terrifying could happen to those weapons.

About half of the country is now in the hands of Syrian rebels. Assad’s regime looks like it could fall any day. What might happen then? U.S. Secretary of Defense Leon Panetta has said that he is worried that Syria’s military could suddenly walk away from its chemical weapons without securing them. If that happens, terrorists could seize them!

Hezbollah is entrenched in Lebanon, Syria’s neighbor to the west. This terrorist group is allied with Syria. Those weapons could go from Syria to terrorists like Hezbollah, and from there to Western targets!

“U.S. and Israeli officials fear that the chemical sites could be looted, leading to weapons being sold or given to radical Islamists or to Iranian-backed Hezbollah fighters. A single crate of artillery shells or a few barrels of chemical precursors would contain enough lethal poisons for a series of terrorist attacks, weapons experts say” (ibid).

So a deadly chemical attack—or series of attacks—could happen outside of Libya, in Israel or even in the United States. After all, who do these terrorists hate most of all? America is their ultimate target. The attacks on America’s embassies and consulates on the anniversary of 9/11 demonstrate that. In October, Iran actually tried a bold terrorist attack against America—to assassinate the Saudi ambassador to the U.S. right there in Washington, d.c. Thankfully, that plot was thwarted. But just because that attack failed doesn’t mean the next one will.

What Happened to Saddam’s WMD?

When the United States led a coalition of nations in war against Saddam Hussein in 2003, the consensus in the intelligence community was that Iraq had massive stockpiles of wmd. Today, however, it is widely considered fact that those stockpiles didn’t exist.

What is the proof? As Melanie Phillips wrote this past summer, it is simply “that none was ever found, surely one of the most profoundly illogical and imbecilic formulations ever to have fallen from human lips” (Daily Mail, July 25).

Saddam Hussein was a vile dictator with many enemies, both nearby and abroad. This man was feared because of these powerful weapons. Yet most of the world apparently believes that he destroyed his own wmd. We haven’t found one shred of evidence to prove that he would handicap himself that way.

On the other hand, there is a mountain of evidence that Saddam Hussein had wmd. He used mustard gas, VX and sarin against the Kurds in the 1980s. He used those terrible weapons to fight a war against Iran. He used them many times to kill Iraqis, his own people. So we know those weapons existed.

In 1991, 60 Minutes spotlighted Saddam Hussein’s nuclear bomb program. In 1992, it quoted the United Nations saying that his gassing of the Kurds was almost without parallel since Adolf Hitler and the Nazis. Saddam Hussein confessed that he had plenty of wmds in 1995.

In 1996, 60 Minutes said that Iraq’s biological weapons hoard was “much more extensive than anyone had believed.” During the Clinton administration, that news program and many others emphasized the danger of Saddam Hussein’s weapons. In 1998, President Clinton announced that an Iraqi informant admitted that Iraq was continuing to develop chemical weapons after the Gulf War ended in 1991.

All the major intelligence agencies agreed that Iraq had these weapons in massive amounts. They estimated that there were potentially dozens of chemical and biological weapons sites across Iraq.

The United States couldn’t eliminate those chemical threats by bombing the facilities. We had to send in tens of thousands of troops. And that’s exactly what we did in 2003, because we were certain that Saddam Hussein had produced massive stockpiles of wmd and that he constituted a clear danger to the United States and other nations.

The U.S. and its allies went into Iraq for the express purpose of getting rid of Saddam’s wmd. But we didn’t find any!

What happened to Saddam Hussein’s weapons of mass destruction? Where did they go?

The other question is, where did all of Syria’s wmd come from?

There is powerful evidence that those weapons stockpiles did exist—and they do exist. They were transferred from Iraq to Syria!

The lead-up to the war took about one year. During that time, Israel’s prime minister, Ariel Sharon, said that satellite data suggested that Iraq was transferring its wmd to Syria. A UN weapons inspector made the same claim. There were reports of significant truck movement between Iraq and Syria just prior to the U.S. invasion. A Syrian journalist who defected to Paris reported that Iraq’s wmd were arriving in Syria, and even identified three places in Syria where they had been buried.

According to terrorism expert John Loftus, who has held some of the highest security clearances in the world, “The best U.S. and allied intelligence say that in the 10 weeks before the Iraq War, Saddam’s Russian adviser told him to get rid of all the nerve gas. … So they shipped it across the border to Syria and Lebanon and buried it.”

Additional evidence from Iraqi documents seized during the war indicates that Iraq received assistance from Russia in transporting weapons and missile components across the border. After the war, an Iraqi Air Force commander and a U.S. federal agent who was on the ground in Iraq when the U.S. invaded also revealed evidence of a weapons transfer to Syria. In June 2010, Ryan Mauro of PJ Media produced a detailed report about the Iraq Survey Group, a multinational group tasked with learning what had happened to Iraq’s wmd arsenal. This group received many credible reports about pre-invasion weapons transfers to Syria.

All of this evidence was later corroborated by one of Saddam’s former generals, Georges Sada. He says he is absolutely certain wmd were transferred to Syria just before the war started in 2003.

Over the past year, while Syria has been in turmoil, still more reports about Iraq’s wmd being in Syria have surfaced. Yet the media have ignored these reports. All this evidence has been simply ignored or shoved aside as propaganda!

Surely you would agree that something is not right here. There is more to this than the media have reported.

They accept the notion that no wmd in Iraq after the war proves that they never existed, or that Saddam himself destroyed them! Why? Because it feeds their story that the war in Iraq was unnecessary, and a mistake!

Syria tried to develop its own nuclear program, but Israel quickly destroyed that in 2007. Yet somehow, Syria rapidly acquired perhaps the most fearsome chemical arsenal in the region, without the international community really realizing when or how.

Melanie Phillips concluded, “Might some of Bashar al-Assad’s chemical and possibly biological arsenal have Saddam Hussein’s name on it?”

Why aren’t more people asking this question? Why aren’t we more curious about it? Does it have to do with politics? There has been a lot of deception here. We need to get to the truth, because so much is at stake—perhaps the lives of millions of people!

There is something else that figures prominently into this equation. It happened in Jordan.

In April of 2004, Jordanian authorities foiled an al Qaeda terrorist plot. The cell had 20 tons of chemicals, including poison gas! Twenty tons of wmd. Al Qaeda’s leader in Jordan admitted that the terrorists planned to kill 20,000 to 80,000 Jordanians. King Abdullah ii said this “major, major operation” would have “decapitated the government.”

Al Qaeda, 20 tons of wmd, and—almost—80,000 murdered Jordanians. Yet the media paid it almost no attention. Nobody asked, Where did all those chemicals come from? Maybe they don’t want to know the answer: Evidence indicates that those weapons were manufactured by Saddam Hussein and deployed by Syria to the terrorists! (sidebar: “The Stockpiles Were in Iraq”).

Syria is the world’s second deadliest state sponsor of terrorism. It has actually used some dangerous weapons in that process. It tried to decapitate peaceful little Jordan. Don’t you think it might use some of those chemical weapons at its disposal? Or that it could give them to terrorists? Evidence suggests it already has!

Again, this is the fundamental question that no one is asking: Where did these terrorists get 20 tons of poison gas to use against Jordanians? The Jordanians knew: It came from Syria.

Will Those WMD Be Used?

Today, with Syria engulfed in civil war and Bashar Assad’s regime in trouble, some people are panicking a bit about what might happen to Syria’s chemical weapons in the event of a regime change. They are right to panic!

Hardly anyone, though, has bothered to ask about how Syria managed to acquire its massive stockpile of wmd. It has never had the reputation for being a large-scale manufacturer of such weapons—certainly not like pre-2003 Iraq. Yet when Assad’s government said it possessed a deadly wmd arsenal, no one doubted the claim. There were no intelligence reports theorizing that Syria suspended its wmd program years ago—or saying that the stockpiles simply do not exist.

No—everyone knows they exist. But no one asks how they got there in the first place, because raising that question would lift the veil covering the media’s shameful record of deception and lies. Politicians and news producers are so worried about their own careers that they won’t talk about it!

We have a very good idea where the wmd in Syria—and Jordan—came from. And we have an even better understanding of where this horrific situation in the Middle East is leading.

To understand the truth, you have to understand Bible prophecy. Psalm 83 reveals what is ahead. Based on that prophecy, the Trumpet has forecast for years that Syria is going to break away from its alliance with Iran. It appears that is what is happening right now.

Prophecies in Psalm 83 and Daniel 11 are unbreakable, and they reveal that this world is about to explode with violence—and those weapons of mass destruction will actually get detonated! Those prophecies show that the spark that ignites the next world war will come from the Middle East.

But this horrible news is going to give way to good news!

Look at Daniel’s prophecy in Daniel 11:40—then follow it to the end. It concludes by talking about the return of the Messiah! The Messiah is coming! Fulfilled prophecy in the Middle East is proof of that. And just as sure as these prophecies have been fulfilled, the prophecies about the Messiah’s return will be fulfilled.

Matthew 24 tells us that if Christ didn’t come to stop this madness, there would be “no flesh saved alive.” But thank God that He is coming to stop the mass destruction and the mass murder and lead the Middle East and the world into a time of peace. We are on a countdown to that glorious event!