From the booklet Solve Your Money Troubles!
By Robert Morley

Do you have trouble with credit cards? If so, you are not alone.

David and Lisa have a problem. They both have university degrees. They both earn decent salaries. And they both recently turned 31. Their problem is that they also have $40,000 in credit card debt.

Their story is all the more tragic considering that after seven years of marriage they still haven’t made a dent in the bill. In fact, it keeps growing.

When asked about why they were in so much debt, David said much of it was “unavoidable” because it came from traveling around the country to friends’ weddings, holiday trips to visit their families and the cost of clothing and feeding their two children. David admits that going to weddings and visiting family is a major source of their debt, but he and Lisa believe seeing friends and family is more important than staying out of debt.

Now David and Lisa are trying to move into a bigger house, with bedrooms for each of their boys. But with the new expenses, their debt burden looks set to increase some more, despite their $86,000 cumulative income and the fact that their salaries have risen over the years.

And David and Lisa have plenty of company.

Meet Ellis and Becky, two lawyers with a dilemma similar to David and Lisa’s—but with one major difference.

On the surface, Ellis and Becky live a great lifestyle filled with exotic vacations and lots of “stuff.” They have university degrees. They drive nice cars and live in a big house. They like to eat out, and are happy to send their children to private schools. And like David and Lisa, they also have thousands of dollars of credit card debt—$52,000 worth to be exact.

The main difference between the two families is that Ellis and Becky earn a whopping $400,000 per year—over 4½ times as much as David and Lisa. And despite the fact that Ellis and Becky are in the top 5 percent of wage earners in America, they still can’t seem to get a handle on their bills.

The moral of the stories? Much of the financial trouble plaguing families today is not the result of low wages.

The basic cause for money problems is what some financial advisers call the Joneses syndrome—that is, the “keeping up with the Joneses” syndrome. According to the Bible, it is human nature for people to compare themselves with each other (2 Corinthians 10:12) and envy one another (James 4:5). If Jones drives a Buick, there is a natural desire to “one up” and drive a Cadillac even though your finances dictate you should drive a used Chevy.

Overextending a normally adequate income for luxuries and personal indulgence is a leading cause of money problems.

Society is geared toward immediate self-gratification. People are constantly deluged with advertising that appeals to human nature. Ads urge consumers to “buy now, pay later.” Even the federal government tells people that national deficit spending is a good thing to get prosperity rolling again. It has become a national fixation in America, and the national economy has become absolutely dependent on it.

God knew that coveting would be such a big problem for people that He devoted one of the “Big Ten” Commandments to this credit-enabled, I-want-it-now spending mentality.

There is nothing easy about “easy credit.” The Bible warns about the dangers of debt. Proverbs 22:7 says the borrower is a servant to the lender. When you borrow, you become a slave (Nehemiah 5:4-5). People do not seem to understand or even consider that when you are in debt, you are just one illness, one recession, one loss of a job, one paycheck away from virtual serfdom—where everything is “in hock” to your creditors and in danger of repossession!

You might be convinced you cannot do without your credit cards or other sources of borrowed money. But the fact is you must learn to get along without them, or at least strictly control them, or you will never experience true financial security!

Start today to exercise the strength of character to wait until you save the cash before you make purchases! A person without self-control is like a city that is broken down and without walls—easily plundered (Proverbs 25:28). Lack of self-discipline in handling money can prove very costly.

Another underreported problem associated with the “buy now, pay later” culture is that of working mothers. The wife and mother should not have to go to work to keep up the payments for things that should not have been bought in the first place. The resultant neglect of children by millions of working mothers and selfish fathers has been a prime cause of juvenile delinquency in the United States.

Your standard of living is probably already beyond the wildest dreams of the typical inhabitant of this planet. Few realize that the average person on this Earth has worn out shoes, little food and no fine furniture or appliances of any kind!

Going Into Debt Is Easy—But Getting Out …

Meet John. John was doing all right financially. He usually had a few dollars left over at the end of the month. So he rented a nicer house. His friends had nice homes, and he felt he “deserved” one too.

Soon afterward, the family car needed major repairs. A salesman persuaded him to try out a newer model. Its luxurious “feel” and the offer of a low interest rate “sold” him at once. John reasoned that the amount he would have had to spend to fix the old car was enough for the down payment.

John’s family began to feel pinched financially. But they “just had to have” some rugs and leather furniture for that nicer house. A dealer cheerfully told John these “needed” items could be paid for by the month. So he bought them without hesitation. Since nothing was said about interest or finance charges, he assumed the installment “privilege” was simply a courtesy of the dealer.

Months later, John finally read the contract he had signed, only to discover that he was being charged an annual interest rate of 33 percent! To keep up the installments, he started putting everyday expenses on his credit card, thus paying more interest on money to pay interest. Finding the minimum payments increasingly difficult to repay, he transferred his balance to a new credit card, all the while racking up more credit card debt. Soon all his credit cards were maxed out and then, facing an unexpected expense for dental work for his children, John missed a payment. All of a sudden he was hit with late payment penalties and a 15 percent interest rate hike on all his credit cards.

The credit trap had slammed shut. In just a few months John was hopelessly caught in a tangle of debt. And the debt collectors were on their way.

This happens to people every year. But it is clearly avoidable.

Not Always Wrong to Borrow

The Bible shows it is not wrong to borrow under certain circumstances (Luke 19:23; Deuteronomy 28:12). The above verses would not be there if God prohibited all borrowing. But some have misunderstood Romans 13:8. Paul did not forbid borrowing when there is a real need. However, he commands us to “Render therefore to all their dues” (verse 7) and not to owe anything that is overdue. The only thing we should owe continually is love toward one another (verse 8).

But a person should borrow only after wise counsel and proper planning. Before making any financial decision, make sure you have “counted the cost,” especially when contractually binding yourself to make payments (Luke 14:28; Proverbs 27:12). Most people have never thought of Luke 14:28 as a financial principle—yet it certainly is!

Like millions of others, John did not “count the cost.” He and his family were victims of their own foolishness and lust. However, they were also victims of a credit system designed to deprive you of your money.

The world’s present system of deficit financing and high taxation has been developing so long that it is virtually impossible for the vast majority of people to pay cash for a home.

But historically, outside of real estate, most other purchases depreciate over time. (In today’s climate, even real estate is depreciating in many cities.) A rule of thumb is that if you are buying a depreciating asset, do without it until you can pay cash. Rent instead. Note that new cars on average lose 70 percent of their value after just four years.

That is why credit can be so dangerous to your financial health. It is so easy to spend hard-earned money, plus possibly years of interest, for things that break down, are consumed, and that depreciate in value. In the end, often all you are left with are the bills. Instead of helping solve financial problems, credit cards and installment plans often create them, keeping people in the habit of overspending and paying out interest. Is it any wonder those who are in debt often remain so?

That is not to say that credit card use is wrong. It can be a very useful tool, especially to avoid carrying large sums of money. Unlike other borrowing, no interest is charged on credit card purchases—if you pay at the first billing. Also, many credit cards offer valuable cash back or travel reward points as bonuses that can be beneficial. Just make sure to pay the card off every month.

If you don’t have the character to control your buying, then don’t have credit cards, and don’t open any type of charge account! If you are already in debt, then strive to get out as soon as possible.

If you are in debt, the Bible says you must do everything in your power to repay. God holds you strictly responsible for paying your debts (Psalm 37:21).

Meet Mr. and Mrs. Muldoon. The Colorado residents took three years, but they did it—they paid off nine cards and $46,244 in credit card debt.

“We changed everything … to bare-bones minimum,” Mrs. Muldoon told cnn. “Basically, if it wasn’t essential to support life, we didn’t do it.” They took extra jobs, they clipped coupons, they grew their own food; a couple of times all they had for dinner was white rice and gravy, but they did it—they became debt free.

“When we mailed that last check … I sat down in the car, I looked over to my husband and I just burst out into tears,” she said.

Analyze your recent purchases, and your present “possessions.” How many of them do you really need? Are they absolutely necessary for the health and welfare of your family? Are they a genuine help in serving God and His Work? You need to answer these questions for yourself so you can have a happy, healthy, prosperous, bill-collector-free future of financial freedom.

Continue Reading: Chapter 4: Getting Out of Debt: An Emergency Crash Course 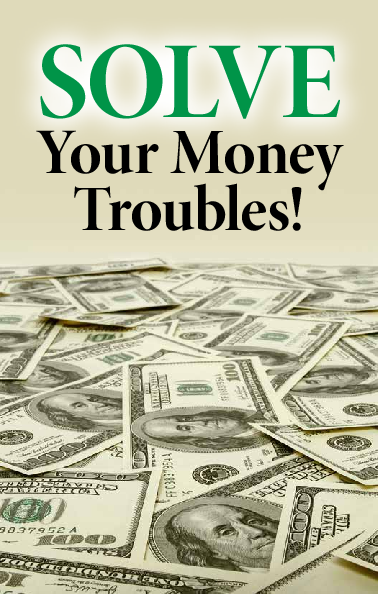