From the booklet Hosea—Reaping the Whirlwind

England and the other nations of Israel are about to receive some staggeringly severe correction. The good news is, they will accept it. They will have a much different attitude as a result of being in the Tribulation. In humility, they will return to God. They will know that God was the author of both their punishment and their healing.

Hosea records their response in advance: “Come, and let us return unto the Lord: for he hath torn, and he will heal us; he hath smitten, and he will bind us up. After two days will he revive us: in the third day he will raise us up, and we shall live in his sight” (Hosea 6:1-2).

“O Ephraim, what shall I do unto thee? O Judah, what shall I do unto thee? for your goodness is as a morning cloud, and as the early dew it goeth away. Therefore have I hewed them by the prophets; I have slain them by the words of my mouth: and thy judgments are as the light that goeth forth” (Hosea 6:4-5). Ephraim and Judah’s goodness is fleeting as a morning cloud and morning dew. There is no depth in their religion. Therefore God says He “hewed” them with our words today! It is as if God took a chisel to a stone, or an ax to a tree. Other translations say His judgments are going forth as thunder and lightning!

“For I desired mercy, and not sacrifice; and the knowledge of God more than burnt offerings” (verse 6). This is the kind of religion God desires of His people. He wants deeply converted people, full of mercy and living by His Word. It is a delusion to believe that we could be a part of God’s Work and be unforgiving toward our brethren. Or to believe we could be a part of God’s Work and cut people down or assassinate their character. God’s people are to be very merciful and full of the knowledge of God. We are not to strike back or lash out when wronged. We are not to gossip about or slander anyone. We can all too easily slip into a ritualistic religion and fall far short of God’s mercy. God requires that His people act as He acts.

“They are all hot as an oven, and have devoured their judges; all their kings are fallen: there is none among them that calleth unto me. Ephraim, he hath mixed himself among the people; Ephraim is a cake not turned” (Hosea 7:7-8). The phrase “hot as an oven” refers to Britain’s corruption. There is no true justice left in the land.

Britain may look good on the surface. But God says in verse 8 that it is like a “cake not turned”—already burned out underneath. British society lacks any real substance. We are, even now, witnessing this great calamity in Britain, the United States, and other Israelitish nations. Serious crises are going to make our nations crumble suddenly, like a burned out cake! It will dumbfound the world. Just as the rising of the United States of Europe will astound the world.

When this calamity strikes, the people will be caught completely off guard. “Strangers have devoured his strength, and he knoweth it not: yea, gray hairs are here and there upon him, yet he knoweth it not” (verse 9). Britain has lost its strength. When Germany attacks, Britain will possess no military strength to hold it at bay. The British are full of gray hairs, but they don’t see the signs.

God led Mr. Armstrong over 50 years ago to see what would happen to Britain. He faithfully warned the people. We in the Philadelphia Church also see it, and have the responsibility to give the people a final warning.

“Set the trumpet to thy mouth. He shall come as an eagle against the house of the Lord, because they have transgressed my covenant, and trespassed against my law” (Hosea 8:1). God’s people need to get behind God’s Work now more than ever before. We need to be faithful in prayer, fasting, tithes and offerings. We need to be sure we are backing God’s Work. It is our job to warn Britain and Judah that Germany is about to suddenly swoop down on them like an eagle. After that warning, the nightmare will begin.

“Thy calf, O Samaria, hath cast thee off; mine anger is kindled against them: how long will it be ere they attain to innocency? For from Israel was it also: the workman made it; therefore it is not God: but the calf of Samaria shall be broken in pieces” (verses 5-6). Ephraim’s great fault is its idolatry. The word “workman” means artisan or craftsman. It is well known that England excels in technical ability. One of its greatest achievements has been the development of nuclear energy for domestic and military purposes. Could this be Britain’s calf? Could Britain think its nuclear power will get it through another war? The United States trusts in its industrial might, which bailed the U.S. out in World War ii. That might has been severely depleted; it will fail the next time.

“When Ephraim spake trembling, he exalted himself in Israel; but when he offended in Baal, he died. And now they sin more and more, and have made them molten images of their silver, and idols according to their own understanding, all of it the work of the craftsmen: they say of them, Let the men that sacrifice kiss the calves” (Hosea 13:1-2). England relies on its “craftsmen” for protection rather than God. They worship their technical ability—they “kiss the calves.” In like manner, the Laodicean Church relies on the fact that it is “rich, and increased with goods” (Revelation 3:17). Britain, the U.S., Judah and the Laodicean Church rely on material things rather than on the great God who created everything.

We in God’s Church cannot rely on physical things or on people to make it into the Kingdom of God! “It shall be also carried unto Assyria for a present to king Jareb: Ephraim shall receive shame, and Israel shall be ashamed of his own counsel” (Hosea 10:6). The word “it” refers to Britain’s idols. Could this be referring to Britain’s great technical ability being carried off to Germany?

Britain will soon become ashamed of its “craftsmen,” or experts. Do you really want to rely upon the experts? No human being or idol can ever deliver what a human being wants.

Do you have some idol sitting between you and God? If any of us do, God wants us to get rid of it now.

“For they have sown the wind, and they shall reap the whirlwind: it hath no stalk: the bud shall yield no meal: if so be it yield, the strangers shall swallow it up” (Hosea 8:7). Britain’s crimes are about to culminate in disastrous curses! Britain sowed the wind and soon it shall be swallowed up! All human beings need to learn that the consequences of sin are extremely painful.

“I have written to him the great things of my law, but they were counted as a strange thing” (verse 12). Israel had great things written to it from God’s law, but rejected them. And the Laodicean Church is now quickly turning away from them. When the calamity strikes, there will be no room for excuses.

“The days of visitation are come, the days of recompense are come; Israel shall know it: the prophet is a fool, the spiritual man is mad, for the multitude of thine iniquity, and the great hatred” (Hosea 9:7). What shall Israel come to know? It will know that its religious leaders were fools; some were even mad. Today there are countless different religions, and all of them have their own interpretation of what the Bible says. It’s nothing but confusion.

What is finally going to happen to God’s nation and Church? “My God will cast them away, because they did not hearken unto him: and they shall be wanderers among the nations” (verse 17). Our people will face the same torture as hostages in Iran, Iraq and other Middle East countries. Why? Because they are dedicated to their idols. Read Hosea 10:1. The people of ancient Israel never learned the lesson that they existed for God’s purposes. They sought to please only themselves.

“When Israel was a child, then I loved him, and called my son out of Egypt. … How shall I give thee up, Ephraim? how shall I deliver thee, Israel? how shall I make thee as Admah? how shall I set thee as Zeboim? mine heart is turned within me, my repentings are kindled together” (Hosea 11:1, 8). This gives us some idea of how God really feels about Israel. Israel was a son to God. And God’s heart and emotions churn deeply because of Ephraim’s rebellion.

“Ephraim compasseth me about with lies, and the house of Israel with deceit: but Judah yet ruleth with God, and is faithful with the saints” (verse 12). Ephraim and Israel continually mistreated God. They paid Him back with lies and deceit for all His love for them. In His great love, God will punish the people of Israel to draw them back to Him.

It is interesting to note that God says Judah still has some godly principles and that it is “faithful with the saints” (verse 12). Mr. Armstrong had an especially close relationship with the Jews. His relationship was prophesied in this verse. This verse could also indicate that Mr. Armstrong’s relationship was only a type of what the Philadelphia Church will experience with Judah. In 2007, we began cultivating a relationship with one of the preeminent archaeologists in Israel and assisting with the exciting excavation of King David’s palace in Jerusalem.

“Yet I am the Lord thy God from the land of Egypt, and thou shalt know no god but me: for there is no saviour beside me” (Hosea 13:4). After all the horror of the Great Tribulation, God will finally be able to work with His people. Britain will no longer trust in idols. The British will no longer look to Assyria for help. They will know God as their Savior!

“O Israel, thou hast destroyed thyself; but in me is thine help” (verse 9). The people of Israel will know that God will help them. All they will need to do is pray. God will hear and respond because the nation will be in a repentant attitude. Be sure to read all of chapter 13.

“I will heal their backsliding, I will love them freely: for mine anger is turned away from him. I will be as the dew unto Israel: he shall grow as the lily, and cast forth his roots as Lebanon. … Ephraim shall say, What have I to do any more with idols? I have heard him, and observed him: I am like a green fir tree. From me is thy fruit found. Who is wise, and he shall understand these things? prudent, and he shall know them? for the ways of the Lord are right, and the just shall walk in them; but the transgressors shall fall therein” (Hosea 14:4-5, 8-9). God is going to renew His tenderness for Britain and all of Israel. Britain will have learned its spiritual lessons so deeply that God will restore its former glory. Only this time, the glory will be far greater because the people will be full of the knowledge of God. They will show forth the fruits of God’s Spirit. 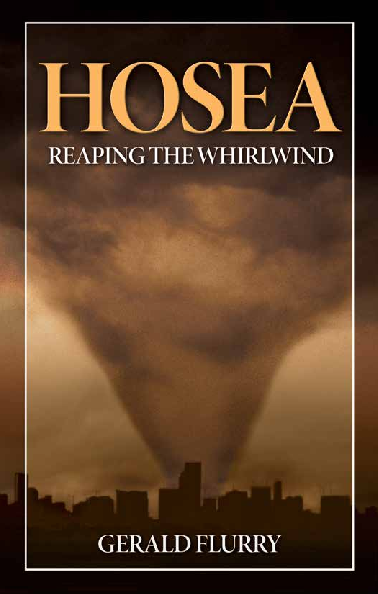