The Spirit of God’s Law

From the booklet The Administration of the Spirit
By Brian Davis

Within any physical family, problems arise that need to be addressed by the administration of that family. The same is true within God’s spiritual Family. God is deeply concerned that those administering His government treat the family members the right way.

“Brethren, if a man be overtaken in a fault, ye which are spiritual, restore such an one in the spirit of meekness; considering thyself, lest thou also be tempted. Bear ye one another’s burdens, and so fulfil the law of Christ” (Galatians 6:1-2). When someone approaches the ministry with a problem, the goal must be to restore the person as a productive, growing member of God’s Family. God wants the ministry to use His Holy Spirit to help His people to see and overcome their flaws. The ministers approach this challenge with authority, but tempered with mercy, knowing that they themselves are not perfect either (Hebrews 5:2).

Letter of the Law Not Compromised

If a minister uses the Spirit of God while he counsels, the members of God’s Church know they are loved! They will be inspired and motivated to change.

In serious cases, using God’s Spirit may mean removing a member from the fellowship. But even that is a tool used in the hope of eventually restoring the one who has been suspended, as well as protecting other Church members.

Notice this description of God in Exodus 34: “And the Lord descended in the cloud, and stood with him there, and proclaimed the name of the Lord. And the Lord passed by before him, and proclaimed, The Lord, The Lord God, merciful and gracious, longsuffering, and abundant in goodness and truth” (verses 5-6). Right at the beginning of the establishment of the Old Covenant, God describes Himself as being abundantly merciful.

Other scriptures prove that Jesus Christ was the God of the Old Testament (e.g., 1 Corinthians 10:4). God the Father and Christ are perfectly unified in thought (e.g., John 10:30). God says, “I change not,” and Jesus Christ is “the same yesterday, and to day, and for ever” (Malachi 3:6; Hebrews 13:8). So, does the fact that Christ is merciful mean that He sometimes relaxes the law?

The description of God in Exodus 34 continues: “Keeping mercy for thousands, forgiving iniquity and transgression and sin, and that will by no means clear the guilty; visiting the iniquity of the fathers upon the children, and upon the children’s children, unto the third and to the fourth generation” (verse 7).

This is a beautiful description of how Christ’s ministers are to operate. Following the example of our High Priest, God’s ministers do not ignore judgment or the law. They do not allow chaos or lawlessness into their congregations.

Law of Love in Action

Philadelphia Church of God Pastor General Gerald Flurry has said that ministers cannot approach shepherding God’s people as if it were a math equation. The Spirit of God cannot flow in that type of counseling! God’s people are not math problems. When true ministers of Jesus Christ must put someone out of the Church, they work to show that individual that such a measure actually represents God’s law of love in action. Even in such difficult situations, the person must know that the administration is working with him or her with a desire to bring him or her back. God’s ministry is eager to throw the person a life preserver, not an anchor! In everything the ministry does, the law of love should be magnified in the eyes of God’s people.

Take one example. A couple had been in the Church for a considerable time, yet their family life was a mess; the husband, wife and children were all miserable. The husband was the kind of man who would say one or two words to his family in a week. He never prayed with his family. He never studied the Bible with them. He and his wife were completely divided. All of them were going to fall away if something wasn’t done quickly.

Over the course of several weeks, repeated, difficult counseling sessions were aimed at addressing their problems. Finally, they had to be told, “We really don’t want to have to put you out of the Church, but this is it! There had better be some changes, or you leave us no other choice.” At that stage, it was hard to imagine them turning things around.

In the weeks that followed, however, the demeanor of this family changed remarkably. They came to services smiling! Their marriage was happy for the first time in many years! At services the man started discussing some of the family Bible studies that he had held with his family. The change was truly miraculous!

Sometime later, this family’s minister e-mailed the man, saying how encouraged he was to talk with him and to observe the changes he had made in his family. He told him how great it was that he had applied the counsel. The man thanked him for the encouragement. Since then there has been regular, cordial conversation back and forth between the ministry and the member.

That is an example of the administration of the Spirit!

Notice what Christ taught His disciples in what is commonly called the Sermon on the Mount: “Think not that I am come to destroy the law, or the prophets: I am not come to destroy, but to fulfil [or magnify]” (Matthew 5:17). Christ went on to explain how not just the letter of the law must be applied, but even the spirit of the law—the obvious spiritual intent. Magnifying the law means we are motivated by the love of God in everything we do. After all, “this is the love of God, that we keep his commandments” (1 John 5:3).

God had this magnification in mind even during the time of the Old Covenant. “The Lord is well pleased for his righteousness’ sake; he will magnify the law, and make it honourable” (Isaiah 42:21). Jesus Christ came and fulfilled this prophecy of magnifying the law—which is the opposite of doing away with the law as most professing Christians teach. With every law God gave, He had this ultimate spiritual reality in mind of magnifying it from the letter to the spirit.

Ministers of Jesus Christ need to magnify God’s law in their own personal lives as well as those of the members. They do this by demonstrating God’s love in how they counsel, how they show mercy, and how they execute judgments. God’s spiritual law must permeate everything we do and think.

Righteousness That Exceeds the Pharisees’

The sermon recorded in Matthew 5 was delivered during Jesus Christ’s early ministry. At the time, He had only been working with the disciples for a short period. The religious, pharisaical leaders of the day were steeped in a ritualistic form of law-keeping. Because of that, Jesus Christ had to reshape and remold the disciples’ minds to show them what His law actually is. Christ had to revolutionize their understanding of the law.

“For I say unto you [disciples], That except your righteousness shall exceed the righteousness of the scribes and Pharisees, ye shall in no case enter into the kingdom of heaven” (verse 20). Christ told them that their righteousness had to exceed what they saw among the religious teachers of the day. That was true for the disciples back then, and it is true for Christ’s disciples today. Our righteousness must far exceed that of the Pharisees. Our understanding of God’s law must go far beyond the letter. It has to be magnified to include the spiritual intent.

Verses 27-28 give another example: “Ye have heard that it was said by them of old time, Thou shalt not commit adultery: But I say unto you, That whosoever looketh on a woman to lust after her hath committed adultery with her already in his heart.” Similar to how thinking evil thoughts toward your brother is breaking the Sixth Commandment, thinking lustful thoughts about a woman is breaking the Seventh. Christ then magnified the law to show that if you even hate your brother, you are guilty of murder. In fact, if you don’t love him, you are guilty of breaking the law! How ridiculous it is for people to say that Christ did away with the law when He obviously expanded it!

In the New Testament administration of the Spirit, Christ takes it to a whole different level, introducing forgiveness and mercy. While sometimes problems are black and white and can be dealt with in that fashion, a true minister is not too quick to insist on a letter-of-the-law punishment for an offense. He aims to use the spirit of the law, to give more time for repentance and forgiveness, for example. The right course of action in each case cannot be determined with a letter-of-the-law manual. This priesthood is better than that! God’s ministers endeavor to stay close to God so they can apply the spirit of the law to each situation.

Turn the Other Cheek

Herbert W. Armstrong said in a May 1979 World Tomorrow program titled “Spirit of the Law”: “[H]ere, according to the way of God and being perfect like God and having the mind of God, having the nature of God, and the Spirit of God, here’s what a Christian is to do. He said: ‘I say unto you, Resist not him that is evil. But whosoever smites you on your right cheek, turn to him the other also.’ How many people do that today? I wonder how many Church people today really believe what Jesus said. Or do they think He was some kind of a sissy that didn’t know what He was talking about? You know people today don’t think that’s very practical. No, if somebody hits you today, you’re going to double up your fists and get good and angry and hit him right back, aren’t you? Well, that’s all the carnality in you and that’s hatred and that’s a spirit of murder in you that is doing it, and that’s what it is.”

The spirit of this command applies to more than getting hit physically. It applies to anyone making accusations or saying unloving things.

Matthew 5:43-45 continue, “Ye have heard that it hath been said, Thou shalt love thy neighbour, and hate thine enemy. But I say unto you, Love your enemies, bless them that curse you, do good to them that hate you, and pray for them which despitefully use you, and persecute you; That ye may be the children of your Father ….” Notice the reason God’s people are to live and think this way: It is so they can be sons of the Father! When God’s people make decisions that are guided by the Father’s Spirit, they become more like Him.

He continued, “People today don’t believe in loving their enemies. And He says to pray for them that persecute you. If anyone would persecute you and accuse you unjustly of things, deliberately, maliciously, knowing that they’re doing wrong, I’ll tell you, humanly the thing that has always been the hardest for me to resist of anything is to avoid a real indignation over an intended wrong. If somebody makes a mistake and they didn’t mean it, why that doesn’t offend me a bit. I don’t think it ever did. But if someone really intends wrong and does it maliciously and purposely, that’s always been the hardest thing for me to forgive. But you know in Christ we must, even that. ‘Love your enemies, pray for them that persecute you that you may be sons of your Father, which is in heaven.’ Well, there it is.”

Continue Reading: Chapter 4: The Weightier Matters of the Law 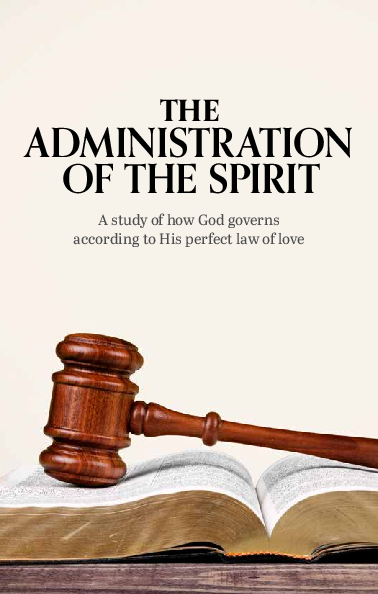