From the book Child Rearing With Vision

In 1926, God began working with Herbert W. Armstrong through a challenge from his wife on Sabbath-keeping. A second challenge on the theory of evolution versus God’s existence quickly followed. These questions led him to an in-depth study to prove whether the Bible is the Word of God, as it claims, or if man is merely the result of evolution. And if God does exist, is His command for Sabbath-keeping something all Christians should obey? Mr. Armstrong’s determination to prove the answers in these matters led to his conversion to the truth and, eventually, to a worldwide work reaching millions! God gave Mr. Armstrong the commission to reach all nations with the gospel (Matthew 24:14). He fulfilled the prophecies of an end-time type of the Elijah, who would restore all things to the Church (Matthew 17:10-11) and restore family relationships: “Behold, I will send you Elijah the prophet before the coming of the great and dreadful day of the Lord: And he shall turn the heart of the fathers to the children, and the heart of the children to their fathers, lest I come and smite the earth with a curse” (Malachi 4:5-6).

Mr. Armstrong established multiple programs for God’s youth in the Worldwide Church of God. In 1947, he established Ambassador College. In 1962, the first youth camps began, which grew to include multiple locations in 12 countries around the world! He also established Imperial Schools for grades kindergarten through grade 12. He published Youth magazine for teens, and The Bible Story series for readers of all ages. He established Youth Opportunities United for teens and Youth Educational Services for younger children. As he stated: “Of all of the people that we are commissioned to preach the gospel to, the most important are the young people—children of Church members” (Worldwide News, July 22, 1985). In the 1960s, he published The Plain Truth About Child Rearing, stressing to parents the importance of raising their children properly so they would have every advantage to grow into successful adults, physically and spiritually.

When Mr. Armstrong died on January 16, 1986, the leaders of the Worldwide Church of God believed they could easily push aside what Christ had restored through him. As the Church entered the Laodicean era (Revelation 3:14-22), they set about to bury what Mr. Armstrong had taught, written and published for over 50 years. But God established another work to continue and complete the Elijah-type work established by Mr. Armstrong.

“In that day will I raise up the tabernacle of David that is fallen, and close up the breaches thereof; and I will raise up his ruins, and I will build it as in the days of old,” God revealed (Amos 9:11). Speaking directly of the Work established through Gerald Flurry in the Philadelphia Church of God (pcg), God encouraged His true and faithful people that He remained in the midst of them and that the modern-day Elijah work could not be destroyed. (You can read about this history in Mr. Flurry’s important book Malachi’s Message to God’s Church Today.)

Beginning in 1997, Mr. Flurry and the pcg battled the Worldwide Church of God in court for six years for the right to print and distribute 19 works written by Mr. Armstrong. First on that list was Mr. Armstrong’s most important book, Mystery of the Ages. In 2003, the pcg obtained the copyrights to these vital spiritual works.

God has flooded the pcg with incredible new revelation on many prophetic subjects and doctrines, including child rearing. He has also raised the ruins of Mr. Armstrong’s work with the establishment of Herbert W. Armstrong College, Imperial Academy, publication of The Bible Story, Youth Bible Lessons, True Education magazine, and summer camps around the world. This should impress upon us how important child rearing is to God.

The first chapter of this book is Chapter 2 of Mr. Flurry’s book The God Family Vision. This exciting chapter greatly expands the foundational teaching given to the Church by Mr. Armstrong. It is new revelation, and it provides the vision through which we must view our child-rearing responsibilities.

Throughout the book, you will find essential quotes from The Plain Truth About Child Rearing, published by the Worldwide Church of God in 1963.

This book is intended to give you the basic foundation to successfully raise a God-fearing child. At the end of this book is a list of additional articles you may find helpful to further your study. No matter the age of your children, we recommend you read the entire book first, and then use the book as a reference.

We hope this book helps you as you endeavor to raise your children to attain their incredible human potential. 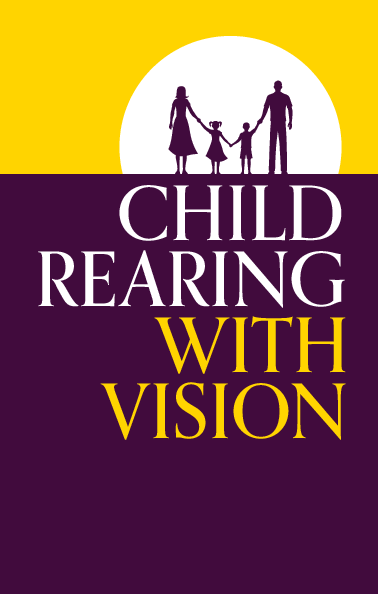