Why Israel and Judah Made Slaves

From the book Which Day Is the Christian Sabbath?
By Herbert W. Armstrong

What were the sins of Jeroboam, so many times spoken of in Kings and Chronicles, relating the history of ancient Israel?

God had reason for setting His law in motion. That reason was our happiness. Every wail of human woe—every war—every bit of human suffering and unhappiness, has been the result of sin. Sin robs humans of happiness, joy and prosperity.

If you take sin lightly—if you think God does not note, and PUNISH for sin—you need to learn, now, just how God dealt with His chosen people for breaking His Sabbath.

WHY Jews Made Slaves

Do you know why the kingdom of Israel was invaded by Assyria, conquered, removed from their land as slaves 721–718 b.c.?

Do you know why the kingdom of Judah was later taken captive, and scattered over the world? Both houses of Israel were sent into national punishment and banishment from the Holy Land because they broke God’s Sabbath!

Does it make any difference? It certainly made a lot of difference to God! And He says He has not changed—He is the same yesterday, today, and forever! (Hebrews 13:8).

First, see why Judah was invaded, conquered by Nebuchadnezzar, and taken into Babylonian captivity during the years 604–585 b.c.

Seventy years after that captivity, according to Jeremiah’s prophecy (Jeremiah 29:10), many of the house of Judah returned to the Holy Land to rebuild the temple, and restore the worship there. The Prophet Nehemiah tells why they had been driven into captive slavery 70 years before:

“In those days saw I in Judah some treading wine presses on the sabbath, and bringing in sheaves, and lading asses; as also wine, grapes, and figs, and all manner of burdens, which they brought into Jerusalem on the sabbath day: and I testified against them in the day wherein they sold victuals. … Then I contended with the nobles of Judah, and said unto them, What evil thing is this that ye do, and profane the sabbath day? Did not your fathers thus, and did not our God bring all this evil upon us, and upon this city? yet ye bring more wrath upon Israel by profaning the sabbath” (Nehemiah 13:15-18).

There it is, in plain language!

Sabbath-breaking was a prime cause of Judah’s captivity!

It was so important to God that He punished His own chosen people with this most severe national punishment—defeat in war—being taken from their land, and made slaves in a foreign land!

Sin is defined by God as the transgression of His law (1 John 3:4). His law says: “Remember the sabbath day, to keep it holy. … [T]he seventh day is the sabbath of the Lord thy God.” To work on the Sabbath, to defile it by your own pleasure-seeking, doing business, etc., is a major sin, punishable by eternal death! (Romans 6:23).

The House of Judah Warned

The house of Judah was without excuse. They had been warned by the prophets.

That was the warning. The house of Judah did not heed it. Now see what happened!

“Now in the fifth month, in the tenth day of the month, which was the nineteenth year of Nebuchadrezzar king of Babylon, came Nebuzar-adan, captain of the guard [today we would call him general of the armies, or field marshal], which served the king of Babylon, into Jerusalem, And burned the house of the [Eternal], and the king’s house; and all the houses of Jerusalem, and all the houses of the great men, burned he with fire” (Jeremiah 52:12-13).

When God warns, the punishment is sure!

Now see what happened to the other nation of Israelites, the kingdom of Israel, 117 years before Judah’s captivity.

God had laid down the choice to these people in the days of Moses, long before they were divided into two nations. Notice it in Leviticus 26: “Ye shall make you no idols nor graven image … to bow down unto it: for I am the [Eternal] your God. Ye shall keep my sabbaths, and reverence my sanctuary: I am the [Eternal]“ (verses 1-2).

In offering the following promises for obedience, or punishments for rebellion, in this key prophecy, only the two commandments were mentioned—those against idolatry and Sabbath-breaking.

Notice how important they are: “IF ye walk in my statutes, and keep my commandments, and do them …” God promised abundant production and wealth, national peace, and national dominance that would have led to world dominance (verses 3-13).

But, said God (verses 14-33), if they refused to obey those commandments, they would suffer sickness and disease, lose all prosperity for 2,520 years, be invaded, conquered, and driven from their land as slaves to their enemies’ lands.

After the division into two nations—when the kingdom of Israel made Jeroboam their king, the first thing this king did was introduce idolatry and Sabbath-breaking.

As God had warned, this resulted in national invasion by King Shalmaneser of Assyria, defeat, captivity, and being taken as slaves to Assyria, 721–718 b.c.

Now see what God said about it through the Prophet Ezekiel.

Ezekiel was given a message from God to the house of Israel (not the house of Judah). Ezekiel was among the Jewish captives, after their captivity, more than a hundred years after Israel’s captivity. By that time the Assyrians had been defeated by the king of Babylon. They later left their land on the southern shores of the Caspian Sea and migrated northwest, finally settling in the land called Germany today.

The people of the house of Israel also migrated northwest across Europe. But they did not stop in Germany. They went on farther west and north—into Western Europe—France, Belgium, Holland, the Scandinavian countries, and the British Isles—where they are to this day, except for the tribe of Manasseh, which much later migrated to the United States.

The Prophet Ezekiel was commissioned to “go” from where he was, among the Jewish people, to the house of Israel.

But Ezekiel never took that message to the lost house of Israel. He couldn’t. He was a slave. Yet he is taking it to them, today, by means of having written it in his book in the Bible—and by the fact that it is being taken to those very people today!

It is a prophecy! It is a message for our peoples today! You are reading it now! God help you to heed!

Prophecy for US, TODAY!

Speaking first of ancient Israel, God says, in Ezekiel 20: “Wherefore I caused them to go forth out of the land of Egypt, and brought them into the wilderness. And I gave them my statutes, and shewed them my judgments, which if a man do, he shall even live in them. Moreover also I gave them my sabbaths, to be a sign between me and them, that they might know that I am the Lord that sanctify them” (verses 10-12).

Notice, the exact wording of the forever-binding Sabbath covenant of Exodus 31:12-17! Now continue: “But the house of Israel rebelled against me in the wilderness: they walked not in MY statutes, and they despised MY judgments … and MY sabbaths they greatly polluted …” (verse 13).

Then God pleaded with their children, a generation later. Notice!

“But I said unto their children in the wilderness, Walk ye not in the statutes of your fathers, neither observe THEIR judgments, nor defile yourselves with THEIR idols: I am the [Eternal] your God; walk in MY statutes, and keep MY judgments, and do them; And hallow MY sabbaths; and they shall be a sign between me and you, that ye may know that I am the [Eternal] your God” (verses 18-20).

The entire emphasis here is between God’s statutes, judgments and Sabbaths on the one hand, and their FATHERS’ different sabbaths, statutes and judgments.

“Notwithstanding the children rebelled against me,” continued God, through the Prophet Ezekiel. “[T]hey polluted MY sabbaths …” (verse 21).

So what did God finally do—generations later?

He scattered them, in national captivity and slavery (verse 23).

“Because they had not executed MY judgments, but had despised MY statutes, and had polluted MY sabbaths, and their eyes were after their FATHERS’ idols” (verse 24).

THAT’S WHY! Did it make any difference?

But now, continue on in this amazing prophecy! Notice the prophecy for us, today!

Speaking of a time, in possibly this decade or the next, in our time, to our peoples, God says: “As I live, saith the Lord God, surely with a mighty hand, and with a stretched out arm, and with fury poured out, will I rule over you” (verse 33).

The expression “FURY poured out” refers to the seven last plagues, at the very time of the Second Coming of Christ (compare Revelation 16:1). The time when Christ will rule over us is at and after His Second Coming. So this, then, is a prophecy for our time!

Every prophecy in the Bible showing where our people (Israel) will be, at the Second Coming of Christ, and the coming great Exodus back to the Holy Land, pictures them in captivity and slavery once again.

Continue the prophecy: “And I will bring you out from the people, and will gather you out of the countries wherein ye are scattered … with fury poured out. And I will bring you into the wilderness of the people [coming exodus—Jeremiah 23:7-8], and there will I plead with you face to face” (Ezekiel 20:34-35).

Notice it! This is the Word speaking—Christ! He will then be on Earth again in Person! And then He is going to plead with our people face to face. That will soon happen to you, and to your loved ones.

It’s time to awake to the imminency, and the stark seriousness of this!

If you rely on the majority of sinning people, you will suffer their penalties with them!

Notice HOW He will plead!

“Like as I pleaded with your fathers in the wilderness of the land of Egypt, SO will I plead with you, saith the Lord God. … And I will purge out from among you the rebels, and them that transgress against me … and YE shall know that I am the Lord” (verses 36-38).

How did He plead with them? He pleaded: “Hallow my sabbaths, instead of your fathers’, so that you may know that I am the Lord.”

And how shall we know that He is the Lord?

Read verses 42-44 in your own Bible! He says our people, when they are no longer rebellious, who will then be keeping His Sabbath, shall remember their ways in which they were defiled, and shall loathe themselves for their Sabbath-breaking!

This is pretty strong teaching! It is the Word of God speaking to you!

Continue Reading: Chapter 7: Is Sunday Mentioned in the New Testament? 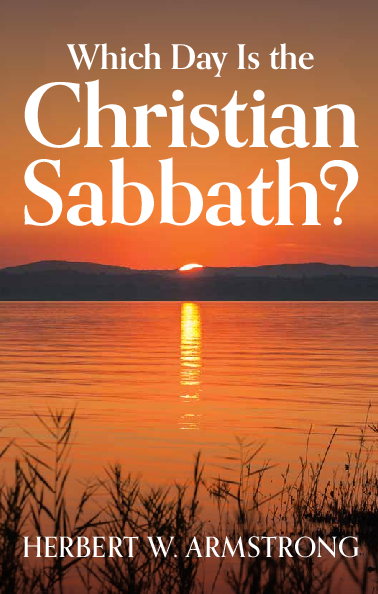