From the book The Missing Dimension in Sex
By Herbert W. Armstrong

If ever the Western world needed a book, it needs this one now! In no area of human life has there been such drastic social change as in that of sex.

The so-called “New Morality,” first unleashed by World War i, intensified by World War ii, completely KO’d Western civilization during the decades of the ’50s, ’60s and ’70s.

Prior to the First World War, it was illegal in the United States to publish, sell or distribute a book of instruction on the subject of sex. After World War i an avalanche of books, pamphlets, magazine and newspaper articles, teachings on sex, descended on the public. Yet in all this, the most vitally needed dimension of knowledge was missing.

During the ’50s, ’60s, ’70s and into the ’80s, sex has been hurled at the public in every manner—in movies, in television, in all advertising, in tv commercials.

Everywhere sex came to be freely talked about. Morals relaxed. The “New Morality” became accepted by society. Divorces escalated. Family and home life became almost nonexistent—yet a solid family structure is the very foundation of a stable and enduring society.

There has floated abroad the delusion that whatever is new and different is “more progressive” and “modern,” and therefore better. Far more often it is retrogression!

The purposes and true meaning of both sex and marriage are extremely vital to know. Physical details can be rightly understood only in the light of what has gone before in this volume. This astonishing knowledge—especially as presented in the earlier and middle chapters of this book—is as vital as it is surprising. It is important to read this book in its rightful order, beginning with Chapter 1.

Regardless of how much knowledge the reader may have acquired on the subject, he will find much that is new to him in this book—and he will come to see this entire subject in an entirely new light.

The impetus which started research and gathering of material for this book, in 1949, was the need to produce our own textbook for the Principles of Living course in Ambassador College. However, the accelerating demand from the constantly enlarging readership of the Plain Truth, now nearly 3 million subscribers in all parts of the world, necessitated preparation of a work for the instruction of this vast number of people, in all walks of life, and in all levels of education.

Purposely, therefore, we have avoided the staid, dry, pedantic, professorial language of scholarship which seems typical of the average university-level textbook. Such writing may inflate the intellectual vanity of the author. But it is our purpose to convey knowledge to the reader. The purpose of words is to convey meaning. We have tried to make this text as plain and understandable as it is frank. We have endeavored to make it easy to read.

This work has been produced out of genuine concern and deep compassion for a humanity robbed by false teachings, as well as by ignorance, of the joys, the delights and the rich blessings which have been made possible. But these may be ours today, if only we will open our minds to receive what has been missing until now.

Read and reread it, from beginning to end, with a clean heart, a right spirit and an understanding mind!—and you will be richly rewarded.

Continue Reading: Introduction: Sex in the ’80s—Where Have Six Decades Brought Us? 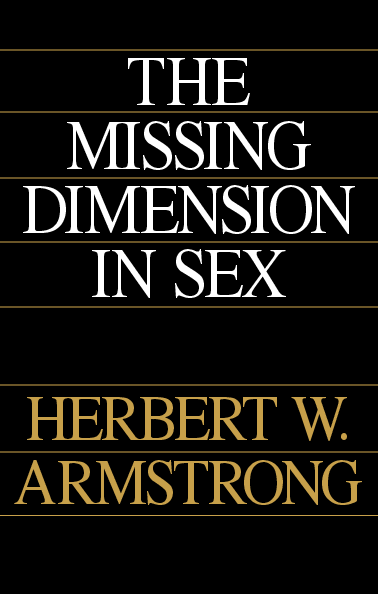