From the booklet Education With Vision
By Stephen Flurry

When we started a small liberal arts college in 2001, it certainly wasn’t because the world needs another educational institution. We established Herbert W. Armstrong College (ac) because of what is missing at all other schools.

But since the Bible does not contain all knowledge, neither should one be educated in the Bible alone. Therefore, AC is not a Bible college. God is balanced (Philippians 4:5). He expected Adam and Eve to use their minds to discover and create new things—to acquire much more knowledge—as long as it was based on His revelation. A godly education must reflect God’s balance. That is why Herbert W. Armstrong College is a liberal arts college based on God’s revelation. In addition to theology, its curriculum includes history, classic literature, language, social sciences, natural sciences, mathematics, physical education and the arts.

This emphasis on humanities also adds to AC’s uniqueness, because most college professors today feel that a liberal education is no longer essential in a college curriculum. Several recent studies have exposed this sad fact. One found that in 1989, only 35 percent of college instructors believed the classic works of Western civilization were essential to a student’s education. By 1995, that already low figure had dipped further to 28 percent.

In 1996, the National Association of Scholars released a much more comprehensive study on liberal education. Using data from course catalogues at 50 top American universities, it pointed out how core requirements for b.a. degrees have changed over the years. Stephen Bertman, in Cultural Amnesia, summarized the results of this study: “The percentage of institutions requiring history for graduation had shrunk from 41 percent in 1914 to 12 percent in 1993; those requiring literature had declined from 57 percent in 1914 to 14 percent in 1993. Thus, in 1993, a student could graduate from 88 percent of America’s best colleges and universities without ever having had to study history and from 86 percent without ever having studied literature. And these were America’s best colleges and universities.”

It’s bad enough that colleges are missing the spiritual dimension of revelation! Now the classic works of Western civilization have been stripped from their core requirements.

This dramatic change in college curriculums, as these studies show, is a relatively new phenomenon. One of the reasons for the sea change is the gross materialism we have already touched on. College instruction is now mostly oriented toward making a living—dollar getting. And since that often requires students to narrow their focus to highly specialized vocational training, the most important courses in a liberal education are ignored.

Another reason the traditional core requirements are vanishing is because education has made a god of science. Scientific study, if it is honest, has its rightful place in liberal education. As the Apostle Paul wrote, honest science actually reveals the things of God! But man, as we have seen, has rejected revelation and taken scientific theory to a twisted extreme—one where creation is worshiped, not the Creator (Romans 1:25).

A third reason for the shift might be attributed to the moral relativism and revisionist history that has swept across educational institutions since World War ii. This modern, politically correct scholarship has come to look down on classical works of Western civilization as being narrow-minded at best—and, at worst, racist, homophobic and misogynist.

These reasons, and many others no doubt, have prompted higher education to abandon the traditional core requirements of the liberal arts. These days, it’s difficult for a liberal arts college to even survive.

To underscore the importance of liberal education, we must again consider the paradox in education. This paradox has proven, beyond doubt, that even the most advanced technical skill and sophisticated scientific data cannot solve the world’s problems. For that matter, it can’t even keep those problems in check! Evil has multiplied many times over.

Education should accept its part of the blame for this ugly phenomenon. We do not mean to suggest that specialized courses or vocational training is the sole cause of increasing evil. But young people ought to be taught how to live before they are taught the finer points of making a living. Liberal education should come before specialized study.

Mortimer Adler, editor of Encyclopedia Britannica’s “Great Books of the Western World,” explains why liberal education is more important than vocational training. In a 1962 essay titled “Liberal Schooling in the Twentieth Century,” he wrote, “As specialized learning becomes more and more fragmented, as the demands for greater and greater technical competence in more and more limited areas of knowledge increase, the greater is everyone’s need for the skills of learning itself, which are acquired through a mastery of the liberal arts, and the greater is everyone’s need for some elementary appreciation of the common humanities, the things that are not only common to all fields of learning, but also remain relatively constant across the centuries, because man himself—our common human nature—remains the same. Everything else in our in our cultural environment can change, and at any rate; but so long as human nature remains unchanged, the task of liberal schooling is the same in the 20th century as it always was” (emphasis mine).

Perhaps without realizing it, Adler alludes to the reason his conclusions are so unpopular today—because of our common human nature. He says that because human nature is the same today as it was in centuries past, then liberal schooling is just as valuable today as ever before.

Modern educators, however, are under the mistaken impression that human nature is constantly getting better. Because they, whether knowingly or unknowingly, worship the god of science, they assume that we are evolving into a better species all the time. That’s the underlying premise of evolution—that human civilization is gradually improving.

These propositions, however, fly in the face of historical fact. The last 100 years, despite the rapid advance of science, will go down in history as humankind’s bloodiest century ever.

And to say that human nature is improving also flies in the face of God’s revelation. God knew, probably long before He created man, that Adam would very likely reject revelation as the foundation of knowledge. That’s why Revelation 13:8 says Jesus was slain from the foundation of the world. God had a plan already in place to redeem this world from sin should Adam reject God’s truth. Two thousand years later, after placing the Israelites in an ideal environment and giving them His perfect law, God lamented the fact that Israel did not have the heart to obey His commands (Deuteronomy 5:29). A thousand years later, after building a magnificent temple, Solomon admonished the Israelites to pray toward this place, that every man might know the plague of his own heart (1 Kings 8:38). Four hundred years after Solomon, God inspired the Prophet Jeremiah to write that man’s heart is deceitful above all things and desperately wicked (Jeremiah 17:9). Jesus Christ, in the first century a.d., said that evil thoughts proceed out of man’s heart (Matthew 15:19). Thirty years after Christ’s ministry, the Apostle Paul told the Romans that the carnal mind was naturally hostile to God (Romans 8:7).

From beginning to end, spanning thousands of years of history, the Bible speaks of human nature as being the same. In fact, because of Satan’s increasing wrath, and because of the knowledge explosion, God prophesied that man’s already evil nature would actually degenerate further in this end time—go from bad to worse! (2 Timothy 3:1, 13).

That is just the opposite of what the scholars of academia carelessly and arrogantly assume! This world—including its systems of education—is terribly deceived (Revelation 12:9). It’s gotten so bad that, just as in the days of Babel, God will have to intervene.

Hosea prophesies of certain events to occur after a modern-day knowledge explosion. Notice Hosea 4:1: “Hear the word of the Lord, ye children of Israel [referring to Israel’s modern-day descendents; primarily the American and British peoples]: for the Lord hath a controversy with the inhabitants of the land, because there is no truth, nor mercy, nor knowledge of God in the land.” Truth, as it’s used in this verse, is just another word for revelation. Hosea said that in this end time, there would be no revelation from God!

Verses 2 and 3 discuss the burdensome weight of rampant sin and evil that is breaking our society. Verse 6 reveals where this widespread ignorance of God’s truth is leading: “My people are destroyed for lack of knowledge: because thou hast rejected knowledge, I will also reject thee ….” God actually prophesied of this end-time missing dimension in education!

Destruction is coming—not because we lack human knowledge, but because man has rejected godly knowledge. Notice verse 7: “As they were increased, so they sinned against me: therefore will I change their glory into shame.” While that word increased can mean to multiply in number, Gesenius’ Hebrew-Chaldee Lexicon says it can also mean “to make or do much,” “to produce much” and “to make great.” God actually prophesied of this end-time paradox in education! Man has produced so much knowledge in the last century. But because it is based on the wrong foundation—because he has rejected God’s knowledge—our sins are increasing at an equally astounding rate! And that, God says, will eventually lead to worldwide destruction!

God, even now, is preparing to intervene directly in the affairs of men. Jesus said the coming Great Tribulation will be worse than anything this world has ever seen. But He assured us that God will cut that dreadful time short—before man destroys himself (read Matthew 24:21-22). Just like He did at the Tower of Babel, God will intervene to save man from himself—and then the process of re-educating this entire world will begin! Acts 3:19-21 refers to this as the “times of restitution of all things.” It’s when God will send His Son to rule this Earth along with those resurrected saints who will have qualified for positions within Christ’s administration. These few will then help Christ reestablish godly revelation to its rightful place as foundation of all knowledge.

That means the curriculum at every school—from elementary on up—will be based on God’s law! It says in Isaiah 2:2-3 that people will flow into Jerusalem to be taught God’s law. Headquarters will establish the curriculum, and Christ’s administrative staff—the teachers of the World Tomorrow—will see that it disseminates to all corners of the Earth. Isaiah 30:20-22 says these teachers will supernaturally appear at times to remind people of the right way to live.

With a universal system of education established by God, it is easy to envision God’s knowledge filling the Earth as the waters cover the sea (Isaiah 11:9). Everyone—all with different creative talents and abilities, but with a common understanding of God’s purpose for man—will finally see eye to eye (Isaiah 52:7-8).

And then, once they have been schooled in the liberal arts, their real education will begin. They can apply that all-important knowledge in every aspect of life.

True education is a life-long process. It’s about realizing your incredible human potential. That cannot be accomplished in school or in college alone. But with God’s vision as a foundation, those few years of college can certainly serve as a springboard for greater success and happiness in life.

Herbert W. Armstrong College is but a small foretaste of what colleges will be like in the World Tomorrow. It’s not like other colleges and universities today—those institutions suffocating under the increasing pressure of gross materialism, godless science and politically correct nonsense.

Herbert W. Armstrong College’s uniqueness is best summed up by the school motto: “education with vision.” 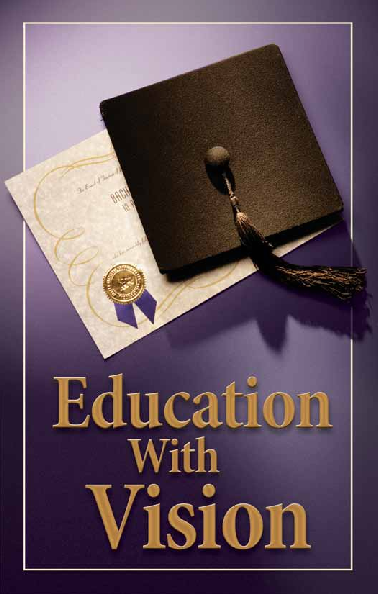