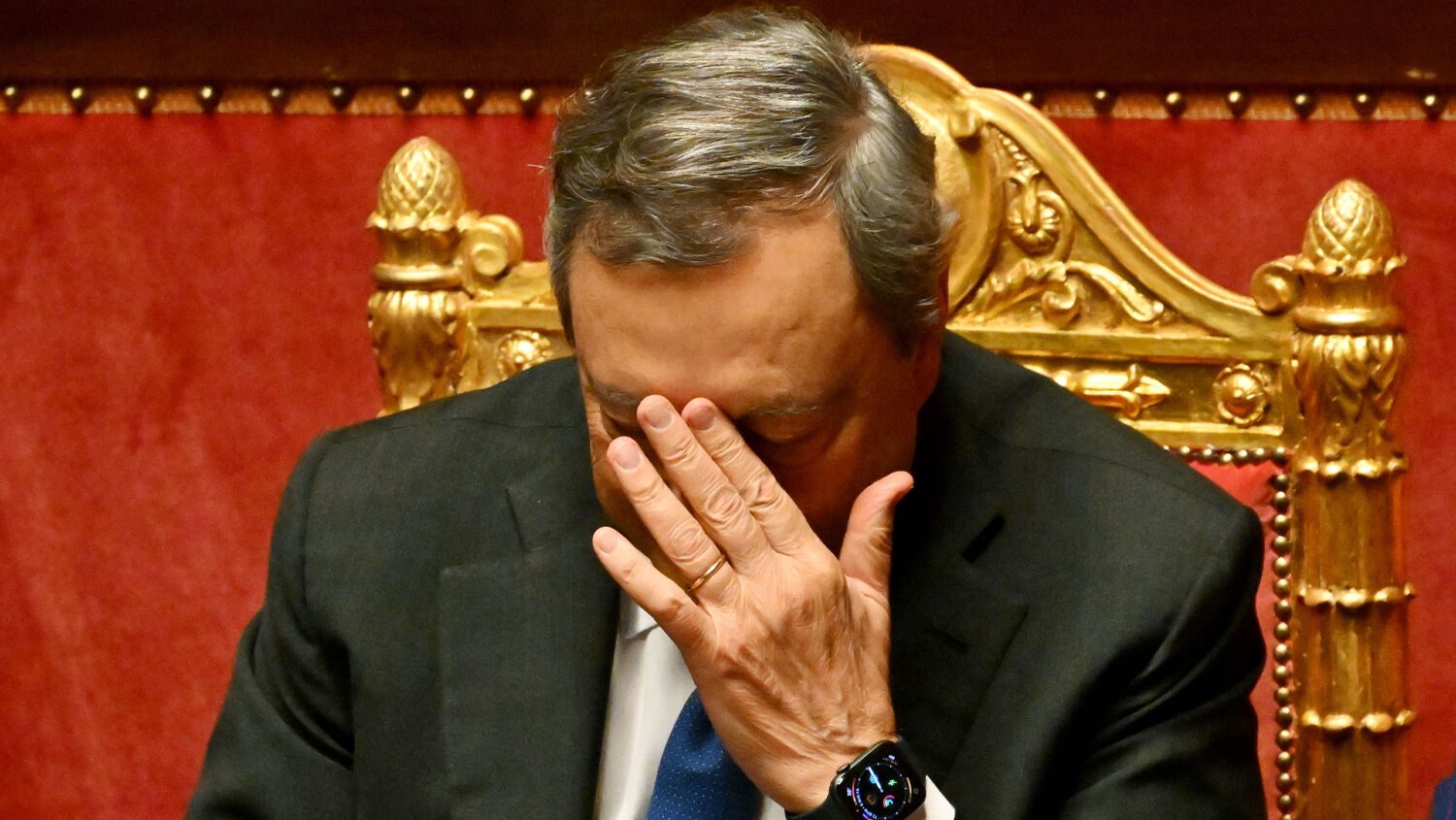 With Italy’s technocratic leader gone, the country stands on the brink of an economic explosion—or a fascist takeover.

Italian Prime Minister Mario Draghi resigned today after his coalition fell apart, leaving Italy, and all of Europe, with a leadership vacuum at a critical time. The former head of the European Central Bank was brought in as a relatively neutral expert to lead a coalition of both the left and the right in February 2021. It has been a rocky road, and this month the disagreements in his coalition became too great. He sent in his resignation last week (but it wasn’t accepted) after the populist Five Star Movement refused to back his government in a confidence vote. A second confidence vote yesterday showed he could not cobble together the wide-ranging coalition he wanted, and so this morning he resigned once again. This time the president, Sergio Matterella, accepted it.

It happens at a critical time. Europe never fixed its problems after the 2008 financial crisis; it simply papered over them with printed money. The feared euro crisis never exploded, and many have stopped paying attention. But the underlying problems are now far worse.

It can get away with that when the European Central Bank is printing money and buying up Italian debt, but high inflation is forcing cutbacks on money printing. And private investors are growing more reluctant to buy Italian debt. A year ago, Italy had to pay only 0.7 percent interest to borrow money for 10 years. At the start of this year, it was 1.17 percent. Last week it was 3.4 percent. Now it’s 3.6 percent.

During the financial crisis, economists warned of a 7 percent danger zone. Once interest rates for Italy’s 10-year bonds hit that level, they believed Italy would no longer be able to afford to pay its debts. With Italy’s debt burden so much higher now, Capital Economics’ Jack Allen-Reynolds believes the danger zone is now at 5 percent.

If Italy fails to pay its debts, the consequences would be dramatic. EuroIntelligence wrote that “it would be a shock of a magnitude higher than that of Lehman Brothers or the 1929 Wall Street crash.”

Draghi—whose name means “dragon”—was one of Italy’s last hopes for fixing its economic system. He was also one of Europe’s last hopes for a strong leader. Germany’s leader, Olaf Scholz, is relatively new at his job. He looked promising, but has seen his popularity plummet, with 58 percent now saying they disapprove. French President Emmanuel Macron spent his first term in office trying to be “Mr. Europe.” But after elections last month, he no longer has a majority in Parliament, and he’ll struggle to lead his own country, let alone Europe.

Italy may get another caretaker or technocratic prime minister. But most likely it will head for early elections in October. The favorite is Giorgia Meloni, leader of the Brothers of Italy.

As head of a far-right coalition, her election would mark a dramatic new phase of politics for Italy and Europe. Some pretty extreme parties would be leading a G-7 nation.

The parties set to dominate the oncoming Parliament all model themselves after Italy’s fascist dictator, Benito Mussolini.

Mussolini’s great-grandson Caio Giulio Cesare Mussolini is a politician in Meloni’s Brothers of Italy. They took advantage of that by making posters of the Italian flag with “Mussolini” emblazoned across them. The party is descended from a movement started in 1946 by Mussolini’s supporters. In 2019, several of their mayors held a celebratory dinner on the anniversary of Mussolini’s march on Rome.

“The strength of Mussolini’s rhetoric, drawing heavily on the old glory of the Roman Empire, still has not lost political currency,” wrote the Associated Press, describing the rise of the party several years ago. Caio Mussolini said the pull of Italy’s past remains strong, and “many want to write Mussolini on the ballot.”

A competitor, and possible coalition member for Meloni, is Matteo Salvini, leader of Lega Nord (Northern League). Salvini has often deliberately modeled himself after Benito Mussolini. He has used one of Mussolini’s slogans (“So many enemies, so much honor”), addressed supporters from the same balcony Mussolini once used, and has himself photographed in similar ways.

In 1984, Herbert W. Armstrong wrote that an economic crisis beginning in America “could suddenly result in triggering European nations to unite as a new world power larger than either the Soviet Union or the U.S.”

Europe remains vulnerable to any kind of economic crisis. The fallout from the last crisis is what caused the rise of these almost neofascist groups in Italy.

“Have we so quickly forgotten how close we came to economic disaster in 2008?” Mr. Flurry asked. “Mr. Armstrong saw this crisis looming in 1984. The steps that were taken to avert it in 2008 solved nothing—they only delayed it for a short time. There is going to be another financial meltdown—far more catastrophic. It will strike perhaps within the next year or two. Herbert W. Armstrong warned that a massive financial crisis centered in America would ripple across the world and spark the rise of the seventh and final resurrection of the Holy Roman Empire. We are seeing that develop right now.”

The basis of this prophecy is in Revelation 17, which forecasts the rise of a “beast” power, or empire. This power has continually risen before and is led by a woman, or church in biblical symbolism. This can only be referring to a European power. This power is a union of “ten kings” (verse 12), who shall “have one mind, and shall give their power and strength unto the beast” (verse 13).

“What will cause these nations to unite so forcefully?” asked Mr. Flurry. “It is very difficult to unite nations into ‘one mind’! That’s an incredibly challenging undertaking. … Mr. Armstrong had profound insight in specifically forecasting that the catalyst for this dramatic unification would be a massive financial crisis that starts in America and ripples out from there. Look at conditions in America and the world today, and it is not difficult to see just how right he was!”

He concluded: “Watch the economic situation in America closely, and its effect on Europe—and see if this dramatic prophecy from Mr. Armstrong doesn’t come to pass just as he said it would!”

The Bible reveals that God will use this Holy Roman Empire to punish the disobedient descendants of ancient Israel. Now we could see a major step in the rise of this empire at the same time as major political developments in the Israelite nations.

But this punishment is part of God’s plan to bring all nations, including all of Europe and the Holy Roman Empire, into His Kingdom. To understand this plan, and Europe’s role in it, read our free book The Holy Roman Empire in Prophecy.