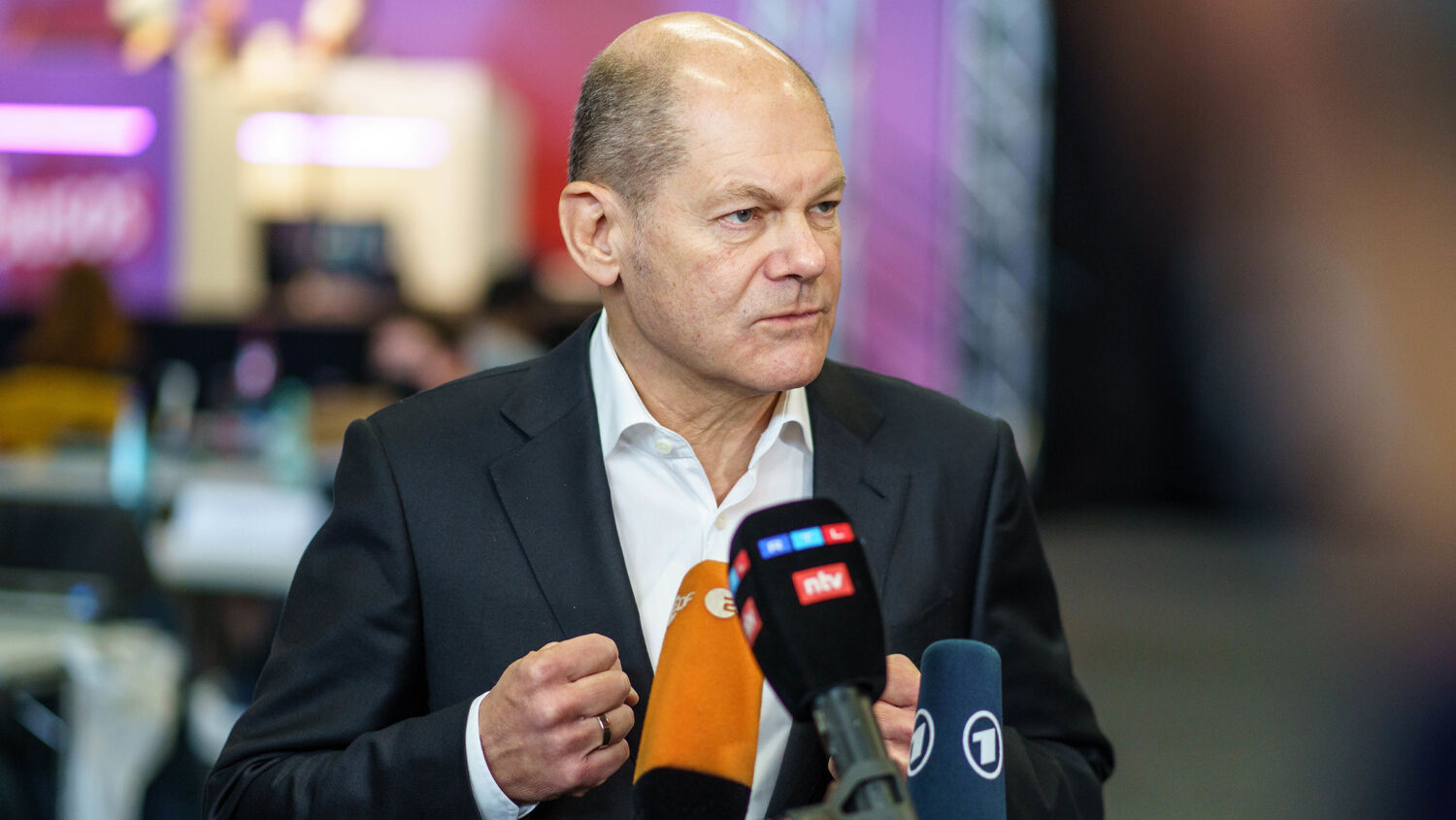 And maybe off a cliff

Social Democratic leader Olaf Scholz brought a simple message to German voters this summer: If you like Chancellor Angela Merkel, vote for me.

It was a plausible pitch. Scholz is from a different party than Merkel, but his left-wing group was in coalition with Merkel’s right-wing Christian Democratic Union. While other candidates committed major gaffes, Scholz channeled Merkel’s aura of calm confidence. He even copied her “preacher’s triangle” hand gesture.

And it worked. Scholz went from being the underdog to, just about, the winner.

Now he has successfully led three parties through complex coalition negotiations. The proposed coalition agreement was published last week. It just needs to be approved by party members and the Bundestag. If all goes smoothly, this time next week Scholz will officially become Germany’s first new chancellor since 2005.

But the coalition document shows he will be a much farther-left chancellor than advertised. The new government wants a radical environmental agenda, plans to legalize cannabis, and is opening the door to another migrant crisis.

The coalition has a lengthy chapter on “queer life.” Politico noted that it is “nearly three times as long as the section on Jews, a fact that prompted raised eyebrows in some quarters given the recent surge in anti-Semitic attacks in Germany.” Germany legalized homosexual “marriage” under Ms. Merkel’s watch—though she herself voted against it. But now the lgbt agenda is going to move much more quickly in Germany.

If successful, the push to legalize cannabis could also have a visible effect very quickly, with pot shops potentially springing up the way they have in the United States and Canada. Plans to lower the voting age to 16 could also prove controversial. But the new policies on the environment and migration have the highest potential to provoke dissatisfaction or even catastrophe.

The coalition aims to end all use of coal by 2030. At the same time, the country is working to phase out nuclear power, and natural gas prices are at a record high. Politico noted that it is “surprising” how “unrealistic some of the targets are.”

“Keep in mind that Germany’s renewable push has already left the country with some of Europe’s highest electricity prices,” it reported “With inflation already rising and working people complaining about their heating bills, accelerating the coal pullout could soon prove politically untenable.”

The new government will also be much more migrant friendly. New arrivals in Germany will be able to become citizens in three to five years. They also want to make it easier for migrants to bring their family members to Germany. They’ll make it easier to stop deportations if a target country becomes more dangerous. They want to bring in more migrants directly from troubled countries. They also called for migration reform at the EU level, which would probably see Germany volunteering to take in more migrants from other EU countries.

These plans have not caused much outrage yet. As usual, politicians have promised they’ll be cost-free, with all downsides minimized. But once the consequences start to bite, Germans could become very angry at being misled. They thought they were getting Merkel 2.0, and ended up with Marx-lite.

If fuel prices soar, or a new wave of migrants arrives, this government could find itself very unpopular very quickly. The last migrant crisis catapulted a relatively unknown far-right party to the top of the opinion polls. What will happen if one hits again? Meanwhile, America is showing how quickly a radical environmentalist agenda can lead to inflation. And no country on Earth gets rattled by inflation quite like Germany does.

But this is not the only obvious pitfall for the new government. This will be the first time modern Germany is governed by a three-way coalition. The Green Party has pushed hard for environmental measures. It will control a new “environmental super-ministry”—formed by merging the environment minister and economics minister posts. But the party’s policies will be expensive.

Any major extra spending will have to be approved by the Finance Ministry—a separate department from the Economics Ministry. This will be controlled by the low-tax, low-regulation Free Democrats.

And it gets worse. The new coalition may have a majority in the Bundestag, which functions similarly to a lower house, but they lack a majority in the Bundesrat. The Bundesrat has the power to veto most significant pieces of legislation. Even if the coalition is able to find a way to translate their dreams into legislation on which they all agree, they could find themselves blocked by the right-wing Christian Democrats.

The one area there seems to be broad agreement on is European integration. The coalition documents discuss “necessary treaty changes” that will “lead developments to a European federal state.” The proposed coalition also wants a more muscular Germany—calling for the army to arm drones for the first time.

Merkel’s center-right party broadly agrees with these objectives, and so these may make it through the Bundesrat. But aside from these areas, the coalition may not accomplish much of anything.

So Germany’s next government might be on the brink of driving itself off a cliff. Or it could simply stall. Either way, its future does not look rosy.

And either way, Germany’s political system will have failed. It will have delivered either a radical-left government that few thought they were voting for, or simply not delivered anything.

The Bible prophesies that a strong leader will soon come to power in Germany. Either outcome will help pave the way for that leader.

The turmoil of Joe Biden’s administration in the U.S. has caused a rising appetite for President Donald Trump to return to the White House. A left-wing government in Germany could cause a similar appetite in Berlin.

The book of Daniel has a lot to say about this coming strongman. This prophetic book is for the end time (Daniel 12:9). Daniel prophesied of events that have since happened. They were prophecy for him, but are history for us. But even these historical events are types of what is still ahead.

Daniel 8:23 describes the rise of “a king of fierce countenance, and understanding dark sentences.” Verse 25 says he will be defeated after he stands up “against the Prince of princes,” revealing the time frame for this fierce king’s reign: He will come to power in the very end time, right before Jesus Christ’s Second Coming. Another passage in the same prophetic book tells us how this man will come to power (Daniel 11:21-31).

Daniel 11:21 prophesies that the European people “shall not give” this Antiochus “the honour of the kingdom: but he shall come in peaceably, and obtain the kingdom by flatteries.” The Hebrew here shows that he does not gain power in an orthodox, legitimate way. There’s some kind of breakdown in politics as usual.

The situation in Germany right now could easily lead to this breakdown. In his cover article for the November-December Trumpet issue, editor in chief Gerald Flurry wrote:

He warned that Germany’s indecisive election is “going to produce a magnificent opportunity for somebody to assume power through deceit and flatteries,” continued Mr. Flurry. “We must closely follow German politics! Europe truly is up for grabs!”

An indecisive election is swiftly making way for either an indecisive government or one far to the left of what most voted for—and probably both. In this increasingly tumultuous world, the government could soon fail—and fail in such a way that there’s no time nor opportunity to hold regular elections. Olaf Scholz could be a weak German leader who paves the way for a strong one.

Even if the path is not quite so linear, Germany’s growing dissatisfaction with democracy will continue.

The Bible’s prophesied strong leader is nearly here—and you need to understand him and what he will do. Mr. Flurry explained the Bible’s prophecies about this man in more detail in his article “Europe Is About to Be Hijacked.”