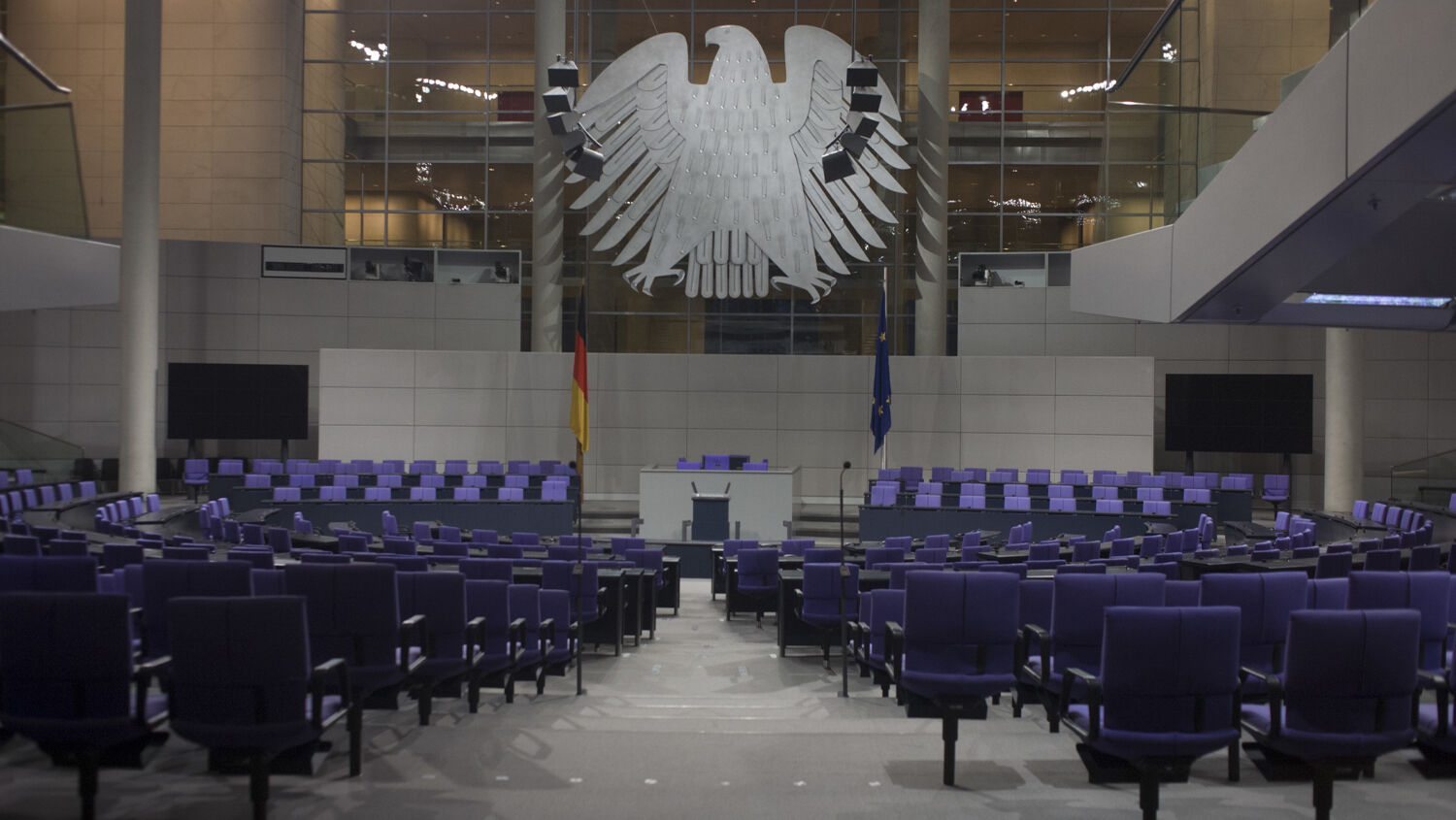 The Plenary Chamber in the centre of the old Reichstag building in central Berlin, Germany.
In Pictures Ltd./Corbis via Getty Images

Germany’s coalition talks began with a burst of optimism and goodwill. Of the complicated coalitions on offer, the Social Democrats (spd), Greens and Free Democrats quickly decided to push forward with a coalition. We were told negotiations would be over by Christmas—a long time—but much less than the last coalition.

Behind the scenes, party leaders knew it wouldn’t be that easy. They’ve all worked to enforce total silence around the talks.

“It is a gigantic political experiment,” wrote Der Spiegel. “Almost 300 experts from the three parties involved have been meeting for the last 10 days in 22 working groups to define the policies.

“They want nothing to leak to the outside. That, party leaders believe, is the only way to avoid the kind of public pressure that might ultimately lead to the talks falling apart. Those involved in the negotiations are eager to present an image of harmony. In reality, though, the parties are still far apart on many controversial issues.”

Looking at the parties involved, they are set to remain far apart, even if they paper over their differences enough to form a government.

There’s a lot for the parties to disagree on. The top priority of the Greens is environmentalism. It’s in their name. But the Free Democrats are pro-business and all about low taxes and low regulation.

The Greens want to control a newly created environmental ministry that could veto any government decision they deem bad for the environment. The other parties are not so keen on giving the Greens veto power over everything they do.

The Greens also want an end to the sale of new combustion vehicles by 2030 and an end of coal power by 2038. The Free Democrats want to support Germany’s valuable auto industry.

The parties may have kept their negotiators quiet, but their own lawmakers aren’t so disciplined. One prominent Green member of parliament said that his party was standing aboard the Titanic, saying, “We should avoid the iceberg.” The other two parties are answering, “What will you give us for it?”

Foreign policy is another sore spot. Here, the groups are arguing over the length of the document that would spell out the coalition’s foreign-policy goals.

More substantially, the Greens and Free Democrats would like to see Germany stand up to dictators and countries like Russia and China. But the Social Democrats have traditionally favored closer relations with Russia. They accuse their smaller partners of being too idealistic—saying that in the real world, you can’t snub China.

covid-19 policies could also prove a breeding ground for disagreements. The Free Democrats generally oppose harsh covid rules and oppose future lockdowns. But coronavirus cases are rising to record levels in Germany, and pressure could soon build for tougher measures.

Nor are disagreements restricted to policy. The Greens “don’t trust the spd chancellor-in-waiting, Olaf Sholz, nor his team of negotiators,” wrote Der Spiegel. “The exploratory talks tended to magnify that distrust.”

And the disagreements don’t just exist between parties. The Social Democrats and Greens both have major internal divisions. A lot of this revolves around the military. Significant factions in the two parties want a radical withdrawal from United States military alliances. Some want a more pacifist Germany, and many want to return the U.S. nuclear weapons on loan to Germany. It seems likely that all the different factions could get behind an increase in military spending—but there are fierce disagreements on what it would be spent on.

All this means the coalition is not a done deal. “Don’t hold your breath on a new German government forming by early December,” wrote Politico, referring to the target date set by party leaders. But even if the coalition negotiations succeed, the tasks of government just begins.

“The coalition agreement is the lesser challenge,” said Wolfgang Ischinger, head of the Munich Security Conference. “The real problems will begin when they actually have to govern.”

The easy way to sort out a sticky coalition issue is to put some vaguely worded platitude that everyone can get behind into the agreement. But that just causes more problems when it’s time to work out what the platitude means in practice.

So if the coalition succeeds, it will probably be weak and short-lived.

As Trumpet editor in chief Gerald Flurry pointed out in the cover article in the latest Trumpet issue, this is a crucial moment for Europe. As America weakens under Joe Biden, “[t]here is a real recognition in Europe of their need for military unity,” he wrote. “The trouble is, they lack the robust leadership needed to bring it about. Analysts say Europe is up for grabs.

“It is no coincidence that, at this moment, Germany is in acute political turmoil. As a result, all of Europe is leaderless.”

Even in the early days after the election, it was clear that any resulting coalition would be brittle and frail. As we get a better look at this potential coalition, that assessment is clearer than ever.

“This is going to produce a magnificent opportunity for somebody to assume power through deceit and flatteries,” continued Mr. Flurry. “We must closely follow German politics! Europe truly is up for grabs!”

This political turmoil is paving the way for the fulfillment of a keynote Bible prophecy. The book of Daniel describes the arrival of a strong dictator in a revived Roman Empire. Mr. Flurry wrote:

Daniel 11:21 reads, “And in his estate shall stand up a vile person, to whom they shall not give the honour of the kingdom: but he shall come in peaceably, and obtain the kingdom by flatteries.” Anciently, men were naive and credulous, and Antiochus took advantage of them. He pretended to be someone he was not and obtained office through flatteries and deceit. This is a pattern we need to watch for in the modern “king of the north.” Moffatt says this “vile person” is “a despicable creature.” A “despicable creature” is going to take control.

How could this happen in the sophisticated nations of Europe?

In the end, 10 kings will give their military might to one man, and will form a superpower that will shock the world!

As standard politics stall and coalition governments prove ineffective, Germany will be ready to turn to a strongman.

Many biblical prophecies feature this strongman. They say he’s going to destroy mightily. But he’s also a key part of some of the most inspiring prophecies in the Bible. You need to learn more about this man. Mr. Flurry’s article “Europe Is About to Be Hijacked” explains in detail what the Bible says about him and why he will appear on the scene soon.