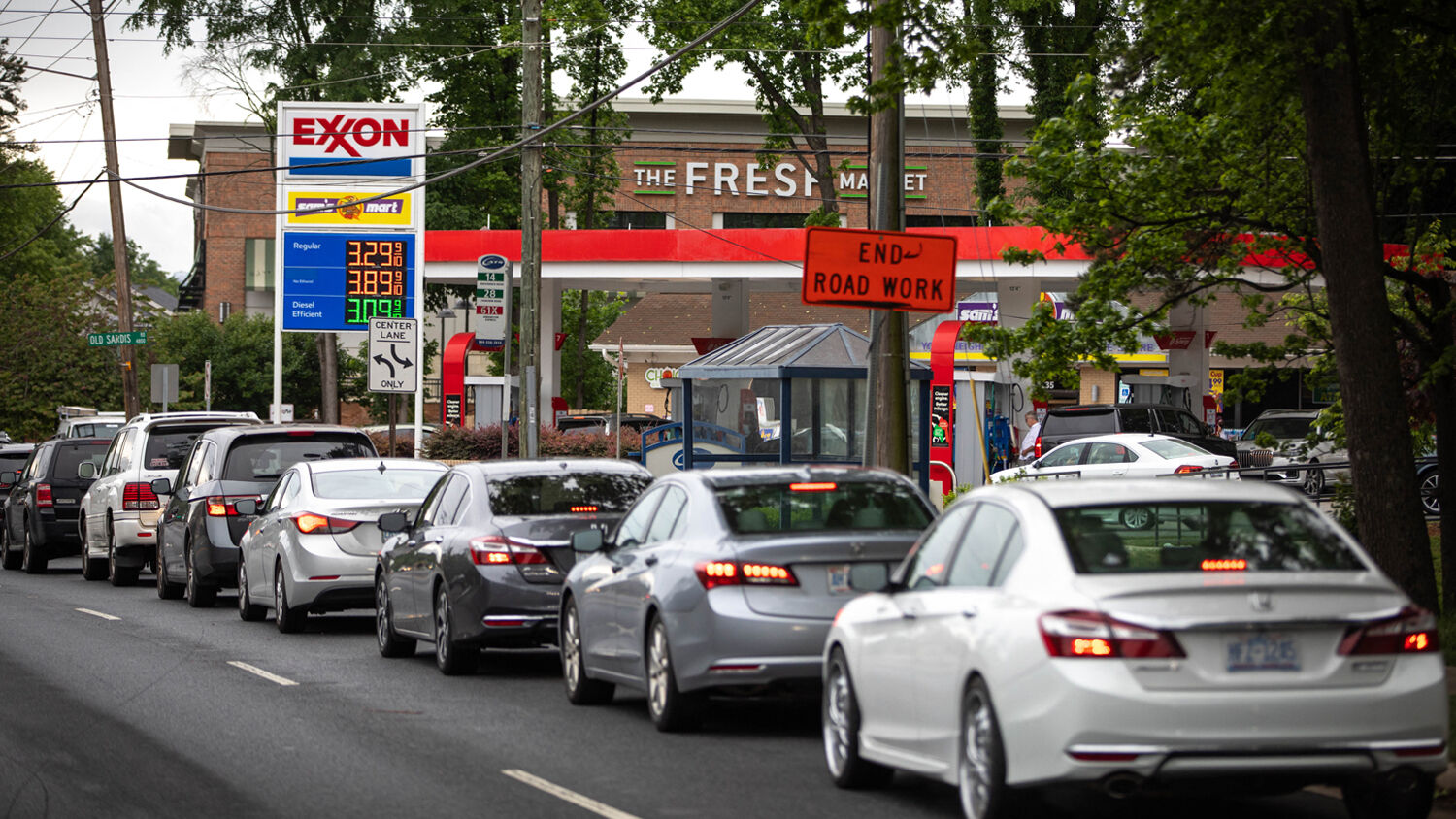 Motorists line up at an Exxon station selling gas at $3.29 per gallon soon after its fuel supply was replenished in Charlotte, North Carolina on May 12.
LOGAN CYRUS/AFP/Getty Images

We’ve heard a lot about the potential danger of cyberattacks—stories of what these attacks “could” or “would” do. We’ve seen headlines about big businesses being hit. But to the average person, the danger has largely been theoretical.

A series of recent attacks has shown us how far-reaching the real-world implications of a cyberattack could be. This isn’t just about keeping your computer safe. Your car, your electricity supply, even your dinner are at risk.

One of America’s most important energy conduits was shut off by a cyberattack, first reported on May 8. Colonial Pipeline links Houston’s oil refineries with the eastern United States. It carries about 45 percent of the region’s fuel—3 million barrels a day. Politico called Colonial Pipeline the “jugular” of America’s pipeline system.

Rather than risk hackers causing permanent damage to these fuel arteries, Colonial shut down its whole system—the first time it had done so in its 57-year history. The results were soon felt in the real world. Lines piled up at gas stations. Prices shot up. Stations ran out of fuel.

Before the fallout could become disastrous, Colonial Pipeline paid a ransom of $4.4 million to a cybercrime group called DarkSide. Disaster was averted—but at the cost of informing criminals everywhere that cybercrime could get you rich, quick.

It should have been no surprise that another attack followed soon after. jbs, a South American company controlling one fifth of America’s beef and pork slaughtering capacity, was shut down on May 30. Plants in America, Australia and Canada were brought to a halt. Tens of thousands of workers stood idle because of an attack launched by a handful of people, hundreds of miles away.

Food is not an industry that would immediately seem vulnerable to such an attack. But it has become heavily technologized. Due to covid-19 and the ensuing restrictions, the world is facing a shortage of microchips, hurting the obvious targets—computer and tv manufactures, for example. But it has spread beyond that, with America facing a new car shortage. And it could even impact the price of potato chips.

“The biggest factor impacting the ability of United States farmers to produce the food we need has nothing to do with the weather, the markets, trade, regulations, or disease,” reported the trade journal Hoosier Ag Today. “The worldwide shortage of computer chips will impact all aspects of agriculture for the next two years and beyond.” It has led to a shortage of farm equipment and spare parts. “As farmers integrate technology into all aspects of the farming process, these highly sophisticated semiconductors have become the backbone of almost every farming operation,” it writes.

In April 2020, as tensions ratchetted up between Israel and Iran, Iran attacked Israel’s water network. The attacks were unsuccessful, but the fear was the hackers could corrupt chlorine control—potentially poisoning the water remotely.

In 2015 and 2016, Russia-backed hackers shut down Ukrainian power stations, or distribution stations, leaving hundreds of thousands of Ukrainians without power in the depths of winter.

Experts believe the attack could have been much worse. “[W]ith the right exploit, it’s possible that someone could permanently disable power-generation equipment or the massive, difficult-to-replace transformers that serve as the backbone of our transmission system,” according to Robert Lee, who assisted in investigations of the 2015 Ukraine attack (Wired, June 20, 2017).

Such an attack could easily happen in the U.S. “Washington, D.C.? A nation-state could take it out for two months without much issue,” Lee told Wired.

“The people who understand the U.S. power grid know that it can happen here,” he said. If anything, it could be even worse. Ukraine prevented worse damage by switching to manual control. Experts warn that may not be possible in America.

Foreign groups routinely probe the U.S. electric system. “[S]o many attackers have stowed away in the largely investor-owned systems that run the U.S. electric grid that experts say they likely have the capability to strike at will,” the Associated Press warned Dec. 21, 2014.

What Happens When It’s a State?

All of this ignores the more frequent attacks targeting personal data or government agencies. These too do real damage, even though they may not hit your wallet so immediately.

Thus far, these attacks have come from criminal organizations. Many of these have links to Russia. Russia gives these attackers safe harbor, and their intelligence agencies may be helping them. With little pushback from the U.S. government, there’s little sign these attacks will stop. Russia gets to hurt the United States, all while probing its defenses and learning how to better attack the U.S.

But this is only a taste of what could come. There’s a huge difference between an attack by some pirates and an all-out war—even if those pirates are backed by the state. All-out cyberwar could cripple the United States, or any other major country.

Imagine the potential fallout. Electricity shuts down. Food productions halts. Supermarkets and gas stations both run empty. It would bring the nation to its knees.

The Bible confirms this prospect is very real. In Ezekiel 4:3-5, the Prophet Ezekiel describes a debilitating attack on “the house of Israel.” The timeline of biblical history makes this forecast very odd.

The house of Israel refers to 10 tribes of Israel who separated from Judah and set up their own kingdom. They were besieged and taken into captivity in 721 b.c. Ezekiel was writing 100 years later. Why would he prophesy about something that happened a century prior? It would be like a modern publication forecasting a German defeat in World War i.

If the Bible is the authoritative Word of God, there is only one answer: Ezekiel was referring to an event in the future. The captivity of ancient Israel was only a type of what would happen to its modern descendants. This is why the Bible speaks so much about the events surrounding this captivity; that history is prophecy.

But who are the descendants of ancient Israel. The Bible says that they would include “many nations” (Genesis 17:5) including “a great and mighty nation” (Genesis 18:18), eventually comprise “thousands of millions” (Genesis 24:60). God said these countries would be among the most powerful on Earth.

As Herbert W. Armstrong proved in his free book The United States and Britain in Prophecy, the promises recorded in the Bible could apply only to Britain and America, along with several other European countries—the descendants of ancient Israel. This means the dire prophecies in Ezekiel are for us.

Ezekiel 4 describes a yearlong siege against modern Israel. It goes into graphic detail on the extreme levels of starvation men are reduced to.

Ezekiel 5:1-3 talk about the mass causalities the siege shall cause. Cut off from the world, social problems will explode, cities will burn, and ultimately, one third of the people will die.

“The United States and Britain are going to be left out in the cold as two gigantic trade blocs, Europe and Asia, mesh together and begin calling the shots in world commerce,” wrote Trumpet editor in chief Gerald Flurry. “These nations of Israel are going to be literally besieged—economically frozen out of world trade! As that happens, domestic rioting and violence will become much more prevalent. Already in America today, instances of rioting and burning are occurring more regularly, often associated with racial hatred.”

But how could this kind of siege cause all this destruction? America, Canada and Australia are all net exporters of food. The U.S. is the world’s largest food exporter.

The recent cyberattacks give an answer. They expose how fragile our civilization is. A little disruption can shut down a pipeline or power. Everything is so interconnected that disruption quickly spreads. No fuel means no workers and no supply chain. No microchips means no potato chips. How many resources from around the world have we become dependent on without even considering it?

The Bible doesn’t say so directly, but cyberattacks could form part of a siege. In ancient times, armies would lay siege to cities, cutting them off from all external commerce, food and water. They’d work to break the will of the city’s inhabitants and force their surrender as quickly as possible. Any means were used. Diseased carcasses would be launched over the walls to try to spread sickness. Public execution of enemy prisoners would sap morale. Propaganda could convince the city that their plight was hopeless.

In an upcoming siege, could America’s enemies reach over the walls with cyberattacks, to try and weaken the country more quickly?

The siege will give way to a military attack, and again cyberwarfare could play a role. Ezekiel 7:14 warns, “They have blown the trumpet, even to make all ready; but none goeth to the battle: for my wrath is upon all the multitude thereof.”

“It seems everybody is expecting our people to go into battle, but the greatest tragedy imaginable occurs!” Mr. Flurry wrote. “Nobody goes to battle—even though the trumpet is blown! Will it be because of a computer terrorist?” (Trumpet, January 1995).

“America is the greatest superpower this world has ever known,” he warned. “But we have a very vulnerable point in our military—our own Achilles’ heel. It is so dangerous that I am amazed it hasn’t received more publicity.”

Every army is just as dependent on food, water, electricity and fuel as the average civilian. Disrupt them, and it cannot fight. On top of that, the U.S. military depends on a host of high-tech communications and weapons systems.

Cyberwarfare could soon play a devastating role in America’s future. The last few weeks have given us a glimpse of that.

But God says He allows this for a wonderful and powerful reason. Amid all this destruction, God says repeatedly that His people “shall know that I am the Lord” (Ezekiel 5:13; 6:7, 10, 13, 14; 7:4, 9, 27). Our refusal to know and obey God has set us on a path to destruction. Without God’s help, we will destroy ourselves. But before God can give us the solution to our problems, we must be willing to listen to Him. The coming devastation will finally bring man to this point.

Mankind is made in the image of God. God has incredible plans for His creation. Getting to know this God will open up a future for this whole world that is so incredible no human can imagine it now.

“Mankind is truly part of something so splendid and unique it is hard to even describe,” wrote Mr. Flurry. “Man is something magnificent in potential. We look like God, and He wants us to develop the very character of God also.”

For more information on the hardship of the immediate future, and God’s wonderful vision beyond, read our free book Ezekiel—The End-Time Prophet.