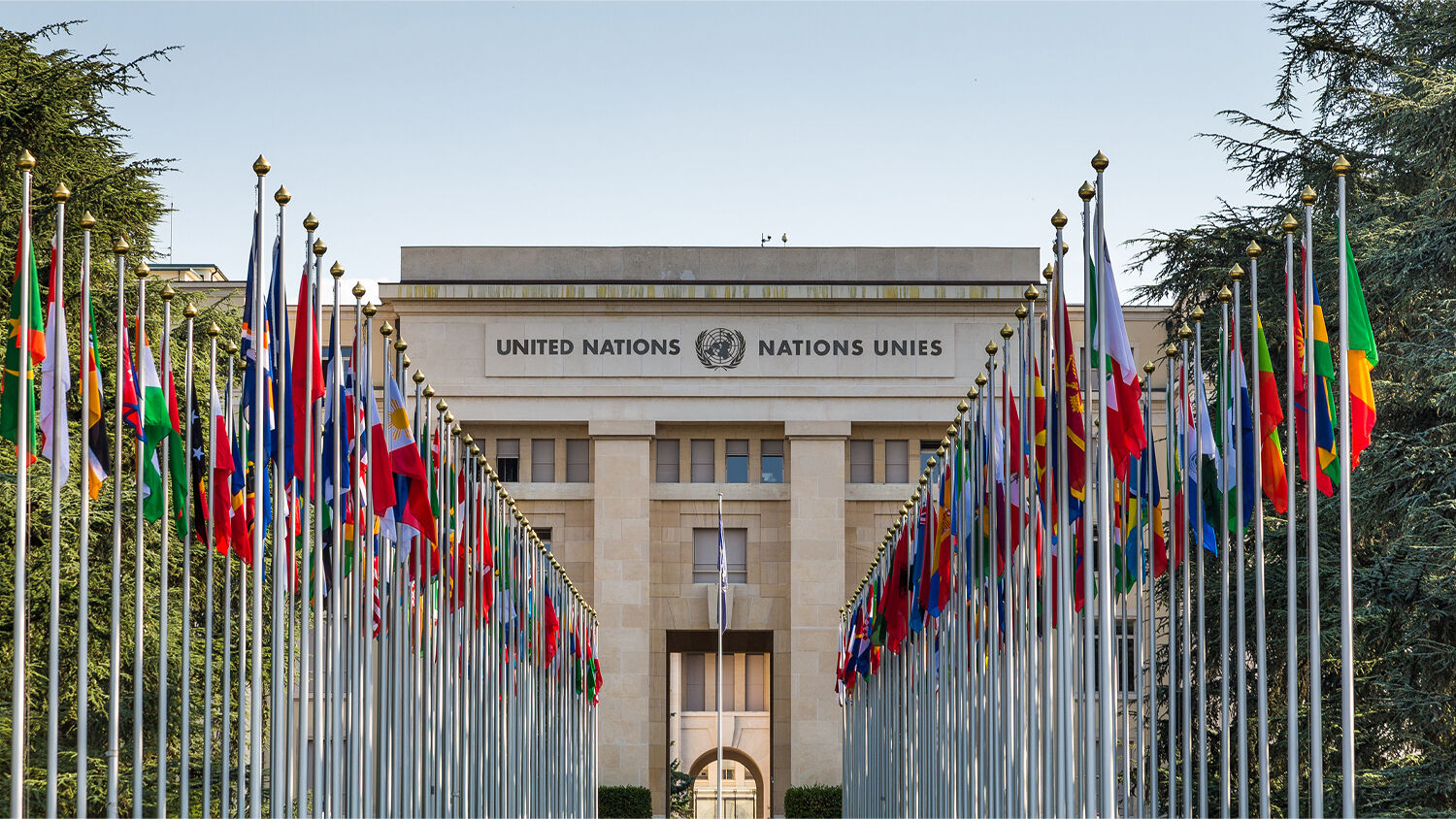 Seventy-five years ago, the world was slowly picking itself up after the most destructive conflict in the history of mankind. Around 60 million had died—200,000 of those in just two gigantic explosions that brought the war to a close. Around the world, statesmen worked to build a new order that would ensure such a war could never happen again.

“Men since the beginning of time have sought peace. … Military alliances, balances of power, leagues of nations, all in turn failed, leaving the only path to be by way of the crucible of war,” United States Gen. Douglas MacArthur said following Japan’s surrender ceremony on Sept. 2, 1945. “The utter destructiveness of war now blots out this alternative. We have had our last chance. If we do not now devise some greater and more equitable system, Armageddon will be at our door.”

Much of this hope for a greater system was invested in the United Nations—a new institution designed to preserve and, if necessary, enforce world peace.

Almost 75 years to the day from Victory Over Japan Day, the United Nations has proved it has totally failed in that task.

A lot of people would say that to date the UN hasn’t done that bad of a job. Sure, there have been about 300 wars and 3,000 other conflicts since that time. But none have been close to as bad as World War ii.

But it would be dangerous to get complacent. As American geopolitical thinker Nicholas Spykman wrote:

The states of Europe were at war 75 percent of the time in the 17th century, 50 percent in the 18th century, and 25 percent in the 19th century. It seems that the frequency of war is declining, but the effect of a struggle is more and more devastating and involves greater cost in human life and material destruction. The total effect of war on the life of nations has not decreased but increased notwithstanding the lengthening periods of peace.

There are already signs of things going badly wrong at the UN. Its job appointments read like a parody. Iran has spent many years in many positions on the UN disarmament commission. Syria has been the vice president of the Atomic Energy Agency. Zimbabwe has chaired the Commission on Sustainable Development. Libya has chaired Disarmament International Security. China, Russia and Saudi Arabia have all sat on the UN Human Rights Commission.

Then there’s all the scandals. The UN’s Oil-for-Food Program in Iraq has been labeled the biggest scam in human history, funneling billions to Iraqi dictator Saddam Hussein. A similar program ended up funneling money to former North Korean Supreme Leader Kim Jong-il.

UN missions have failed to prevent genocide. One in the Congo participated in their own atrocity, raping many local women, including teenage girls. In Israel, in 2000, the UN peacekeeping mission actually cooperated with Hezbollah in kidnapping three Israeli soldiers.

I could go on. There’s the UN’s constant demonization of Israel. Countries like Germany and Japan, which renounced militarism, have rehabilitated their militaries and broken taboos about deploying abroad through UN peacekeeping missions.

But on Friday, August 14, the UN had one of its biggest ever failures. It voted to allow Iran access to the international arms market.

Iran had been under an arms embargo since 2007. But the Joint Comprehensive Plan of Action gave it a way out. Unless the UN Security Council stepped in and intervened, that embargo would end in October 2020.

Only one other nation joined the U.S. in voting for the sanctions to be extended. Russia and China vetoed it—while European countries, including the United Kingdom, sat on the sidelines and abstained.

This vote will give Iran a huge boost. As Brent Nagtegaal pointed out in July:

Up to this point, Iran has had to get by with weapons produced domestically, as well as an aging fleet of aircraft sold to Iran before the embargo began. Even with this limited scope of weaponry, Iran has dominated its neighbors and threatened the Jewish state with repeated wars.

But now, in just three months, the world’s number one state sponsor of terrorism could be armed with conventional weapons that would tip the balance of power in the Middle East.

Iran can buy Russian fighter jets that can reach Jerusalem and even Rome. It can upgrade its submarines. It can also funnel these advanced foreign-made weapons to its terrorist proxies around the world.

Of course, the UN doesn’t bare sole blame for this failure. It was U.S. President Barack Obama who pushed through a deal that would give Iran access to the global arms market, whether or not it actually stuck to the terms of the deal.

Nevertheless, this is a major failure of man’s last best hope for peace. The UN is helping the world’s number one state sponsor of terrorism—a power led by those who believe they can hasten the return of their version of the Messiah by starting World War iii—get access to advanced weapons.

The U.S. will try to lessen the impact of this failure. It may put its own sanctions on any firms that trade with Iran. That would stop a lot of business. But it won’t change the fact that the UN has failed.

But perhaps the most remarkable part of this failure is that Herbert W. Armstrong forecast exactly what would happen from day one of the United Nations, 75 years ago.

He was present when the UN charter was drawn up at the San Francisco Conference on April 25, 1945. He sat in the press room for the first Security Council meeting the next year. And he forecast how it would end.

“The United Nations Conference is producing nothing but strife and bickering, and is destined from its inception to end in total failure,” he wrote on April 29, 1945. “Yet world leaders are pronouncing it the world’s last hope—with the only alternative annihilation of humanity!”

“In the plenary sessions of the conference we hear beautiful oratory enunciating lofty aims of altruism and world peace—to be printed in newspapers throughout the world for public consumption,” he wrote. “But the real sessions are behind locked doors of committee council chambers, and there the savage battle for national interests rages fiercely.”

This is where he saw the problem. Nations weren’t aiming for peace. Instead, “they want gain at the expense of others.”

That’s what we saw on August 14. Russia and China, and even France and Germany, believe they can gain if the U.S. weakens. Empowering Iran weakens America. And so, they’ll empower Iran—despite the massive risk.

The structure of the UN set itself up for failure. The only way to persuade the world’s major power to join is to give them veto powers over its decisions. This means the only way the UN can act is if Russia, China and America are on the same page—it will only happen if America lets Russia and China get their way.

But letting Russia and China get their way means allowing these nations to ride roughshod over smaller powers. “And if the rights of these helpless millions are to be trampled upon with impunity as the price of peace with Russia, then we still have no peace!” wrote Mr. Armstrong.

MacArthur had some good insight 75 years ago. “The problem basically is theological and involves a spiritual recrudescence and improvement of human character that will synchronize with our almost matchless advance in science, art, literature and all material and cultural developments of the past 2,000 years,” he said. “It must be of the spirit if we are to save the flesh.”

It’s not about setting up some new kind of institution. The way to peace means changing man’s basic nature. Mr. Armstrong made the same point. Here’s a condensed and edited version of his 1945 notes, which he revisited in 1970:

It is human to be sensitive about securing one’s own rights, while disregarding the rights of his neighbor. So men are tempted to lie, steal and to kill in order to get what they want.

With men left to themselves, their baser inclinations unrestrained, with selfishness given free play, there can be no peace or order in this world. Man’s mind and will are too weak. The downward impulses of nature are too strong.

The two great commands—love toward God and love toward neighbor—point the only path to peace.

Without government over men, therefore, we could not have peace between individuals. But as we rise in the scale of human relations, the problem of peace and good order becomes more complex, yet the solution remains the same. If the maintenance of peace and order is difficult as between man and man, if it is more difficult as between citizen and government, it is most difficult of all as between nation and nation! The basic conflict is the same as before—(human nature)—but the stakes are higher. In the international realm the selfishness of human nature reaches its lowest level. Nowhere else are the temptations to greed and lust for power so nearly irresistible. National selfishness is more than the sum-total of the selfishness of individuals.

Just as individual man cannot control and resist the downward pull of his passions and nature, so these nations, swayed by national selfishness greater than the sum-total of the selfishness of all individuals, cannot control these ambitions and lusts for power and international aggression.

The United Nations has not brought man peace. In empowering Iran, the UN is “accomplishing” the opposite of its intended purpose—it is accelerating man down the path to nuclear war.

But there is a solution. Mr. Armstrong concluded his article, writing: “‘Except the Lord build the house, they labor in vain that build it.’ The United Nations organization will fail. It is doomed before it starts!”

Man cannot change his own nature. Man cannot bring peace. But God can.

If you believe in a loving God, then you have to believe that such a God won’t allow mankind to destroy itself in nuclear war. The Bible tells us so specifically (Matthew 24:22).

Once mankind has come to the point that he will listen to God, God will build the house. God promises: “A new heart also will I give you, and a new spirit will I put within you: and I will take away the stony heart out of your flesh, and I will give you an heart of flesh” (Ezekiel 36:26). That chapter describes a mankind willing to obey God’s law and walk in the way of peace, and thus: “This land that was desolate is become like the garden of Eden” (verse 35).

To learn more about this, read our free booklet The Way of Peace Restored Momentarily. It describes another of Mr. Armstrong’s roles in international diplomacy. It’s about international relations. But it’s also about a practical way of life that brings peace to families. Human nature causes conflict between nations and individuals; God’s way brings peace to both.

All our material is free—you can read it online or order your own free print copy.