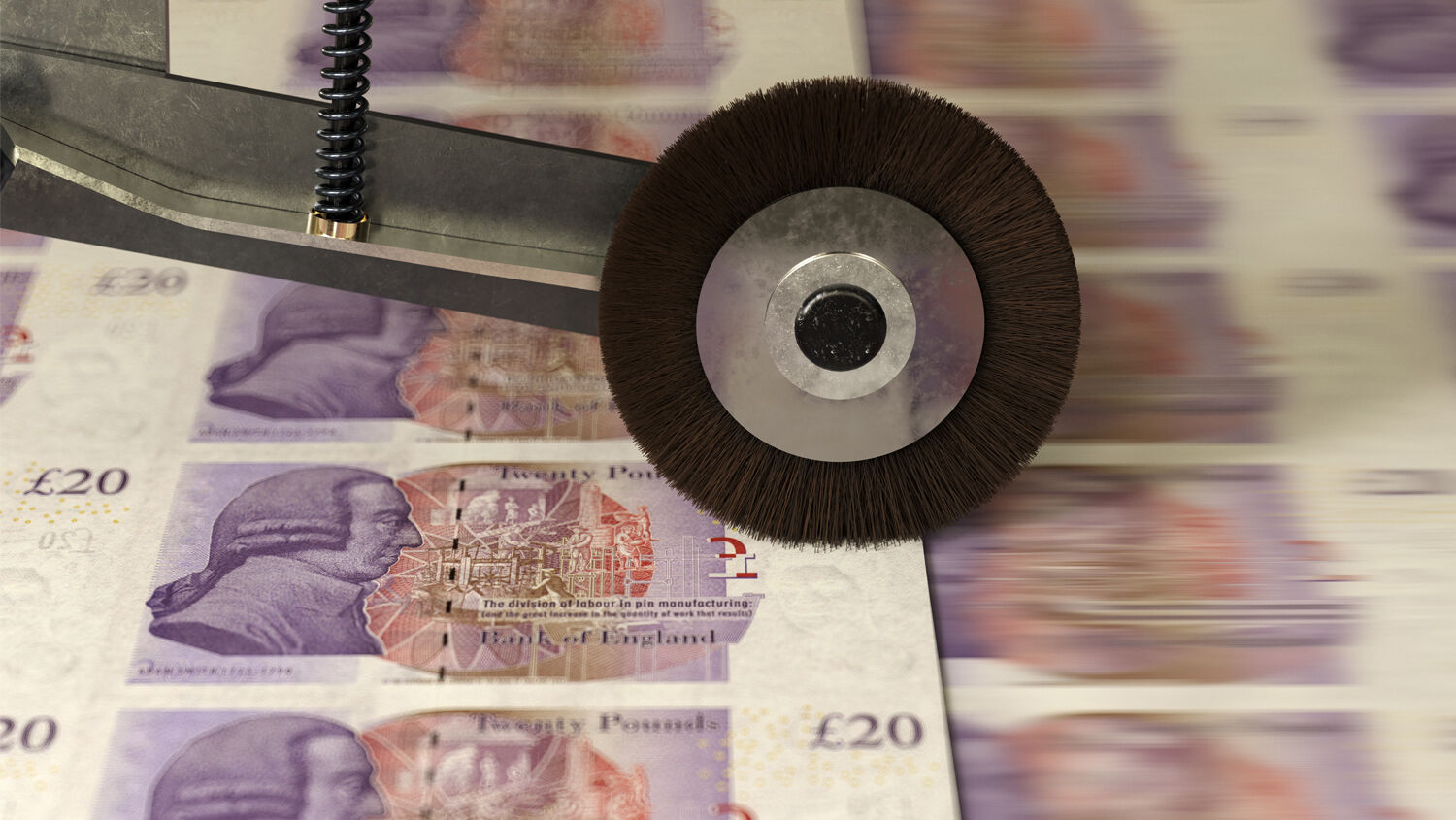 They say there’s no such thing as a free lunch—but what about 50 percent off?

Eat out on a Monday, Tuesday and Wednesday and you can get a half-price meal!* It sounds like the latest promotion from a restaurant or supermarket chain. It even has the usual disclaimers and exclusions (*up to £10 off per person, alcoholic drinks not included, participating retailers only).

But this is no promotion—it’s British government policy. And it’s brought to you (if you live in the United Kingdom) thanks to the printing presses at the Bank of England.

If you live in America, you’re a recipient of a similar, though less gimmicky, scheme, with the government giving you free money.

How did we get to a point where the government is printing money for me to get discount dinners? How can any government think this is a good idea?

It gets back to the four scariest words in economics: “This time is different.”

It’s clear to just about everybody over the age of 5 that the government printing money is a disaster. More money rolling off the printing press doesn’t magically make the country richer. Instead, that extra money starts chasing the same amount of goods, and before long, it takes a wheelbarrow full of cash to buy a loaf of bread.

But now, governments are acting like they’ve found the answer—the magic way to print money and get away with it. We’re doing all the things that lead to disaster, but we’re telling ourselves, This time it’s different. We’ve got money printing sorted.

In the Western world, printing presses are whirring at an epic speed. In response to the 2008 financial crisis, central banks began experimenting with “unconventional monetary policy.”

Rather than printing money and handing it straight to the government, they printed money and used it to buy government debt from other banks—a system called quantitative easing (QE).

After the 2008 crisis, the United States Federal Reserve created around $3.5 trillion this way. This money printing pushed more money into the banking system, pushed shares and property prices higher, and made it cheap and easy for the government to borrow money. But it didn’t lead to economic Armageddon.

Now the printers are whirring even faster. In response to the coronavirus, the Federal Reserve has printed another $3 trillion. In a matter of months, it has printed as much money as it did during the decade after the 2008 crisis.

The Federal Reserve is printing money faster than ever before pic.twitter.com/tLsYElGDSm

This massive money printing has made it much easier for governments to borrow money. Banks know they can swap government ious for money easily, so plenty are willing to lend. Over the last 10 years, most Western governments have been borrowing at a rate never before seen in peacetime. Under normal conditions, investors would get gradually more nervous as the debt went up. They’d demand higher and higher interests rates to convince them to take the risk of lending to such an indebted government. But, partly due to QE, that hasn’t happened. Investors know they can quickly swap their ious for cash, so they keep lending at low rates. Central banks may not be handing over bundles of freshly printed cash to the government, but QE has broken the normal brakes on government spending. And we’re speeding toward disaster.

The International Monetary Fund estimates that governments around the world are spending an extra $9 trillion to deal with coronavirus. It has pushed global government debt to over 105 percent of global economic output.

Add in private borrowing, and we see a global increase in debt far larger than the aftermath of the 2008 crisis. Debt levels are up by 35 percent of global gross domestic product—compared to “just” 20 percent after the last crisis.

Here in the UK, the Bank of England has gone even further. It is now printing money and loaning it straight to the government. We have epic levels of debt, but the government doesn’t have to persuade banks to lend to it. The government plans to borrow £300 billion this year—and £200 billion of that will come straight from money printing.

Over the weekend, the Spectator warned that “the UK government is being kept financially afloat through money printed by the Bank of England.” It quoted an anonymous senior Conservative member of Parliament saying, “We fought the last election saying there was no money tree. Now we say there is one, and it’s in the garden of the Bank of England.”

This money printing has led to a complete unreality about government spending. We’re spending on anything and everything, because we just make money out of thin air and lend it to the government.

This attitude is filtering down to the public—where now, in general, we believe the government has free access to unlimited money.

Take, for example, free school meals here in the UK. Children of parents on a low income can get free lunches at the school canteen. When the lockdown hit and schools closed, the government began providing these free meals to children at home.

But now summer holidays are approaching. In normal circumstances, the children would not get free lunches because they’re not at school. The government planned to end the free school meal replacements over the summer break. But then a prominent football player began a campaign to keep the free meals going.

The campaign was popular. Those who opposed it were accused of wanting poor kids to starve. The campaigners rightly pointed out that the cost of the free meals for poor kids was tiny compared to the many other government programs. They argued that parents of poor children were more deserving recipients of government funding than many of the others.

They may be right about that, too. But my point is that the massive government spending has created this impression that we have trillions of pounds to spare. Any good cause deserves money. The government quickly caved in.

You see the same thing in the U.S. In March, the U.S. passed its largest bailout in history, worth $2 trillion. Now calls for trillion dollar bailouts are routine. There’s a widespread public belief that America has access to this kind of money.

This belief may prove even more financially destructive than the coronavirus bailouts themselves. Britain and America are set to face every crisis in the future with the belief that we have access to free money.

Another Spectator article from July 11 warned:

Who cares if the UK economy will shrink some 10 percent this year, as our national debt rockets above 100 percent of gdp? Stocks are up, bond prices are up, and the laws of economics have been suspended. It’s different this time—and all because of quantitative easing.

Back in 2009, with the global banking system on the brink of collapse, QE was a justifiable emergency measure. But this one-off post-crisis necessity has now morphed into a lifestyle choice. For a decade since the financial crisis, QE has pumped up share prices and suppressed bond yields, allowing governments to borrow cheaply. But as state spending has surged post-covid, we’ve become dependent. QE is now the economic equivalent of crack cocaine.

There’s no way to end that addiction painlessly. But we’re not even talking about ending it. We know that in the past all such addictions have been disastrous. But we’ve convinced ourselves this time is different.

This Time Is Different is also the title of a bestselling book on economics by Carmen Reinhart and Kenneth Rogoff. It comes from a stock trader’s saying: “More money has been lost because of four words than at the point of a gun. Those words are ‘this time is different.’”

Their book, studying hundreds of years of history, concludes that governments repeatedly ratchet up debt and convince themselves they can get away with it. They warn, “What is certainly clear is that again and again, countries, banks, individuals and firms take on excessive debt in good times without enough awareness of the risks that will follow when the inevitable recession hits. Many players in the global financial system often dig a debt hole far larger than they can reasonably expect to escape from.”

“What one does see, again and again, in the history of financial crises is that when an accident is waiting to happen, it eventually does,” they write. “When countries become too deeply indebted, they are headed for trouble.”

But if this happens over and again, why do we keep making the same mistakes? Because we convince ourselves we’ve found a way to get away with it. “Financial professionals and, all too often, government leaders explain that we are doing things better than before, we are smarter, and we have learned from past mistakes,” Reinhart and Rogoff write. “Each time society convinces itself that the current boom, unlike the many booms that preceded catastrophic collapses in the past, is built on sound fundamental, structural reforms, technological innovations, and good policy.”

That’s what is happening now. We know that massive debt and money printing ends in disaster. But this time is different. Now we have some very clever central bankers who have come up with a complicated-sounding form of monetary policy called “quantitative easing”—and now we do things we’ve never done before. We can print money, keep interest rates low, have low inflation, spend tons of money, and keep the economy from crashing. We’ve solved economics!

But this time is not different.

Some basic biblical wisdom is relevant here. Galatians 6:7 states, “Be not deceived; God is not mocked: for whatsoever a man sows, that shall he also reap.” There are laws of cause and effect. Break those laws, and you will reap the results.

Man is always looking for ways to break those laws and get away with it. Many live an unhealthy lifestyle and try to take pills to deal with the ill health they inevitably reap. We convince ourselves we can eat and live the way we like and somehow escape the consequences.

But God inspired that verse to begin with “Be not deceived.” We have a tendency to deceive ourselves about this, to think we’ve gotten away with it, to say, “This time is different.”

And often we do get away with it—for a time. But the penalties always come.

The basic law of cause and effect warn us that a massive crash is coming.

This law operates on a national level and on an individual level. And this cause-and-effect law works for penalties, as well as blessings.

Herbert W. Armstrong wrote an article that we reprinted a few years ago titled “How Your Financial Future Is Determined.” It gives a great overview of these laws. If you want to understand them—both to see the future of the global economy and to help with your own finances—his article is a great place to start.