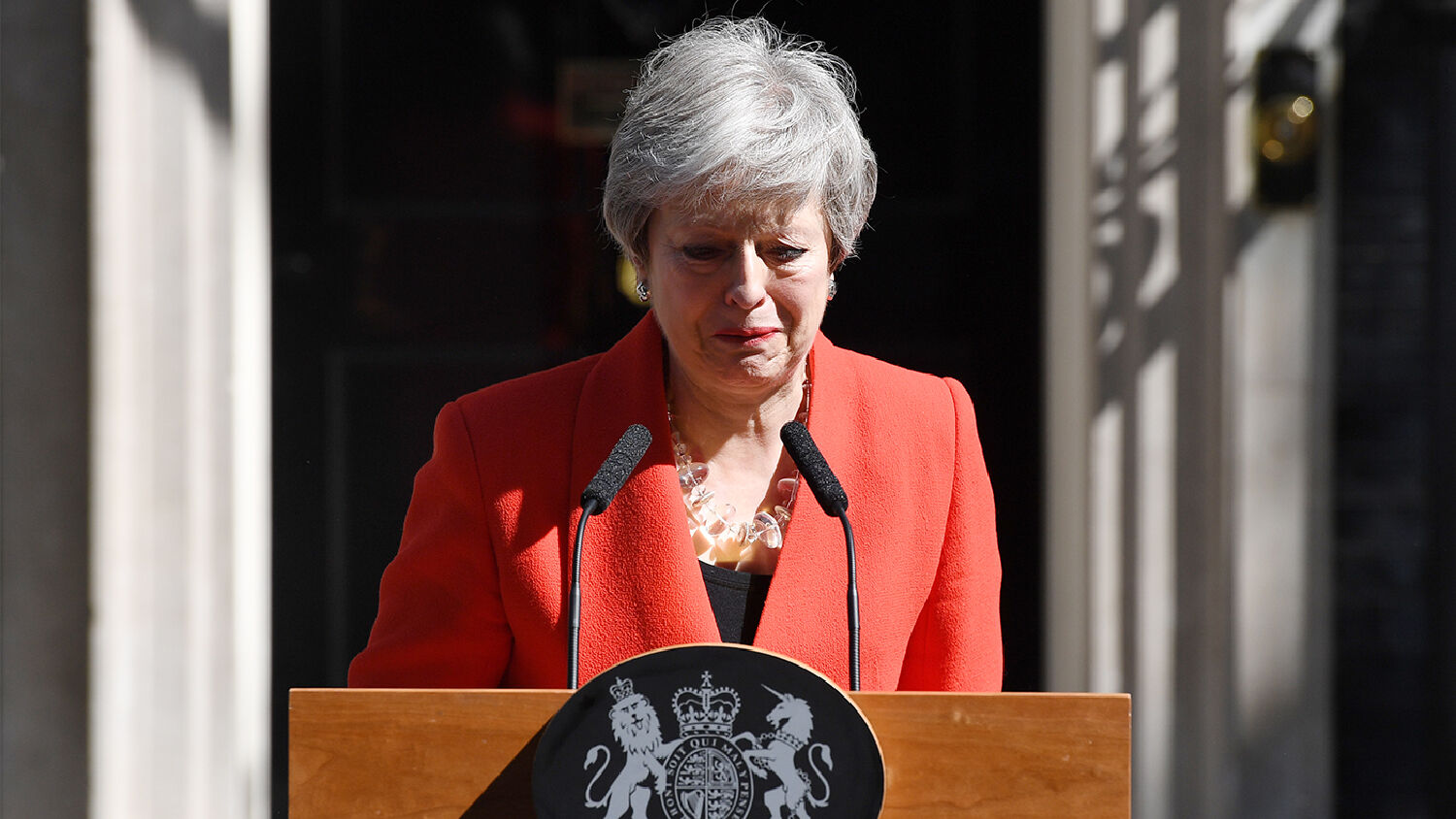 Prime Minister Theresa May announces outside 10 Downing Street on May 24 in London, England that she will resign on Friday, June 7.
Getty Images

Theresa May announces her resignation.

British Prime Minister Theresa May announced today that she will soon resign as leader of the Conservative Party in an emotional statement outside of No. 10 Downing Street. Once a new leader is selected, he will become prime minister, and Ms. May’s term in office will be over.

Ms. May will step down as party leader on June 7, and the process of choosing a replacement will begin shortly afterward.

Her resignation comes after a fourth attempt to push through her European Union exit deal failed.

Ms. May’s unpopularity has been growing within her party for some time. Last week, Conservative backbenchers—members of Parliament who don’t serve in the cabinet—came close to forcing her out of office. However, they agreed to grant Ms. May time for one more attempt at getting her Brexit deal through Parliament.

The fourth attempt unraveled soon after she announced it on Tuesday.

She aimed to get her bill through with the support of the left-wing Labour Party. To do this, she watered it down further. Already many in her own party complained that her deal didn’t do enough to bring Britain out of the EU. Her compromises meant it did even less.

It also paved the way for a second referendum. This “confirmatory vote” would be a choice between staying in the EU, or accepting Ms. May’s deal. A complete break with the EU would not be an option.

This was too much for pro-Brexit M.P.s within her cabinet. As major government figures announced that they could not support the bill, it became clear it would not get through Parliament.

Rather than save her premiership, Ms. May’s fourth attempt has outraged pro-Brexit opinion across the country—and just before European Parliament elections. “Theresa May must go—now. This is a national emergency,” declared the Telegraph on the morning of the vote.

Results of the European Parliament elections will be announced Sunday evening. It is likely that the Brexit party will have won the most seats, with the Conservatives in fourth place.

With her deal dead, her party facing a historic humiliation at the ballot box, and many in her party more angry with her than ever, it was clear that Ms. May could no longer govern effectively.

And so the race to replace her is on. The Conservative Party is split between those who are opposed to the EU and want a “hard Brexit”—a more complete separation—and those who support the EU and want a “soft Brexit.” Politicians from both sides are seeking leadership—though most of the front-runners are pro-Brexit.

Currently, the front-runner is former mayor of London Boris Johnson. As a prominent euroskeptic, but also someone who supports great social spending and action on climate change, he could draw support from both wings of the party. However, in most previous Conservative leadership elections, the one who starts in the leading position has rarely made it to the end.

A very dignified statement from @theresa_may. Thank you for your stoical service to our country and the Conservative Party. It is now time to follow her urgings: to come together and deliver Brexit.

Conservative M.P.s will hold a series of votes on the candidates. The final two will be put before Conservative Party members across the country. Johnson has strong support among party members—so if he can make it into the final two, the job will probably be his.

But a new leader doesn’t mean Britain’s problems are over. The majority of M.P.s want a soft Brexit or no Brexit at all. Parliament has voted against almost every type of possible Brexit.

Meanwhile, the EU is working to punish Britain. Earlier this week, British Steel went bankrupt—because of EU penalties inflicted on the UK to try and force Britain to agree to Ms. May’s deal. This vindictive approach by Europe will make any leader’s job difficult.

When Britain voted to join the EU in 1973, Herbert. W. Armstrong wrote:

Britain is going to look back on Monday, Jan. 1, 1973, in all probability, as a most tragically historic date—a date fraught with ominous potentialities! For that date marked the United Kingdom’s entry into the European Community.

Britain has finally realized the truth of that statement and is now trying to get out. But those ominous potentialities cannot be avoided so easily. Brexit is tearing Britain’s politics apart and has just brought down a prime minister.

It is possible that Ms. May’s resignation could signal a change in direction for Britain. A more pro-Brexit leader may have some success in standing up to the EU.

America has seen this change under United States President Donald Trump. “Now we’re seeing a clear change of direction,” said Trumpet executive editor Stephen Flurry, on his Trumpet Daily Radio Show on Monday. “God is behind it, particularly for the United States, but I think you see it also for Britain ….”

Trumpet editor in chief Gerald Flurry described this change of direction in his article “Saving America From the Radical Left—Temporarily.”

If Britain does experience a similar reprieve, however, it will only be temporary.

In his 1973 article, Mr. Armstrong explained why Britain’s relationship with the EU was so “ominous”:

Biblical prophecy revealed that this empire would start as an economic movement—that it would bring an era of unusual prosperity to Europe. It did start in March 1957, when six European countries—West Germany, France, Italy, Belgium, the Netherlands and Luxembourg—signed the Treaty of Rome, creating the European Economic Community. … How did I know, as far back as 1927, that this coming United States of Europe would spring up—in our time? I knew because I saw it clearly revealed in biblical prophecy. Of course it’s true that almost no one understands biblical prophecy. But no wonder! For almost no one understands what the gospel of Jesus Christ is, or where and how in prophecy the United States and British Commonwealth are identified.

This understanding is key. Once it is understood that Britain and America descended from biblical Israel, it becomes clear why joining the EU is such a disaster for Britain.

God promised great prosperity to the modern descendants of ancient Israel. These blessings are found in Leviticus 26 and Deuteronomy 28. But so are the curses that would fall on our nations if we disobeyed God. One of these curses is persecution by foreign nations. “Therefore shalt thou serve thine enemies,” God says in Deuteronomy 28:48. This enemy “shall put a yoke of iron upon thy neck, until he have destroyed thee.”

Other prophecies reveal exactly which foreign nations God will use to punish Britain and America. Revelation 17 describes a union of 10 kings, which the Prophet Daniel refers to as “the king of the north.” Further study of these scriptures shows this power will be a continuation of the Roman Empire and its subsequent resurrections in Europe. Where do we see a union of nations so connected with the Holy Roman Empire that they signed their founding treaty in Rome? The European Union! This is why Mr. Armstrong forecast the European Economic Community (now known as the EU) would grow into this superpower.

This power is discussed in many more scriptures—and there is much more proof available to identify them.

In joining the EU, the UK shackled itself to the power God is raising up to punish it! No wonder the country is finding it hard to unshackle itself. And even if Britain breaks free, in the long run, it will not escape God’s punishment through that Union.

God is raising up this power for a purpose. He is punishing Britain and America for a reason. To learn more about this reason and His plans for Europe, Britain and America, read our free book The United States and Britain in Prophecy, by Herbert W. Armstrong.