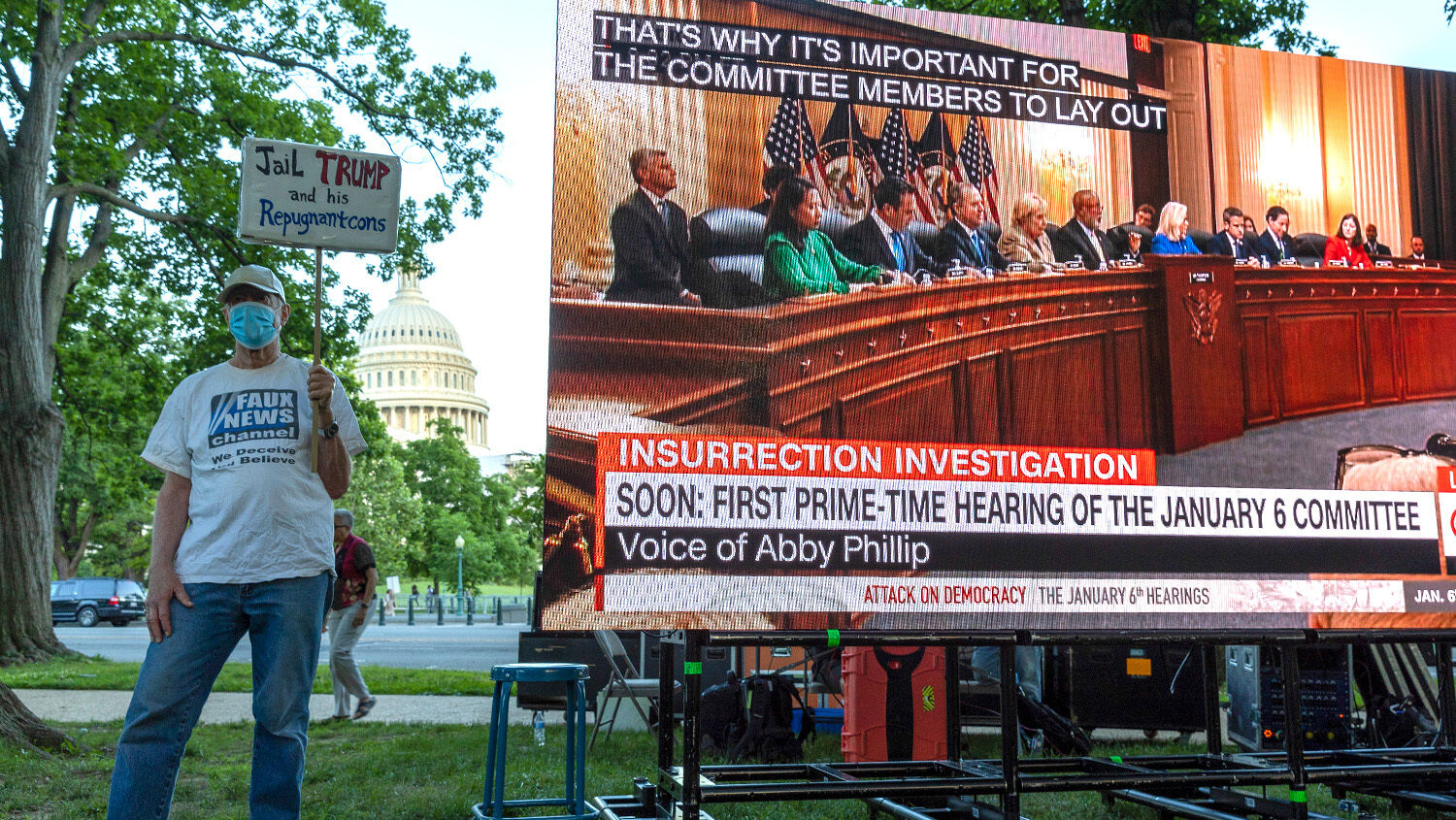 People gather on June 9 in Washington, D.C., to watch the hearing of the House select committee on the January 6 riots at the U.S. Capitol.
Tasos Katopodis/Getty Images

The radical left is desperately trying to stop evidence of election theft from reaching the public.

Democrats and Hollywood executives worked double time on last week’s made-for-tv hearing on the January 6 protest. Supply chain problems are crippling the nation. Gasoline prices have hit $5 per gallon. Runaway inflation is at a four-decade high. The southern border is an absolute catastrophe. But the radical left does not want to discuss the systematic destruction of the United States economy or the border invasion. They want to engage in “insurrection theater” and host televised hearings on the events of the Capitol Hill protests.

Two days before the hearings commenced, the New York Times reported that this “carefully choreographed” prime-time viewing was intended to “remind the public of the magnitude of Mr. Trump’s effort to overturn the election and to persuade voters that the coming midterm elections are a chance to hold Republicans accountable.” In other words, it’s about framing an anti-Trump narrative before the midterm elections.

The January 6 committee tapped a former abc producer to help them air the hearings for a prime-time audience and even arranged for free ice cream at a Robert A. Taft Memorial live screening. So this event is basically the Superbowl for left-wing activists—a time when they can gather around the television with snacks and cheer for the prosecutors trying to make it look like Donald Trump purposefully incited an insurrection.

On the first day of the hearings, the House select committee aired testimony from Rep. Bernie Thompson. He accused President Trump of deliberately inciting “domestic enemies of the Constitution” to storm the Capitol and “thwart the will of the people to stop the transfer of power.” Yet the House select committee did not call on the hundreds of thousands of peaceful protesters who gathered at the Capitol on January 6 to give testimony. They only aired video footage of the few dozen people who caused any trouble.

A fair trial gives the defendants a chance to speak, but the House select committee deliberately screened those it allowed to speak in order to cast Donald Trump in the worst possible light. The panel heard testimony that President Trump endorsed the hanging of Vice President Mike Pence, and it watched video footage of protesters clashing with police. But it did not air footage of President Trump’s speech calling on protesters to keep calm, nor did it hear any mention of the actual evidence that the 2020 election was stolen.

Former Trump adviser Dr. Peter Navarro authored a three-part report detailing evidence of election fraud and worked with former Trump adviser Steve Bannon to devise a plan to stop Joe Biden from taking office. But this plan did not involve violent riots at the Capitol. Instead, this plan dubbed the Green Bay Sweep, involved 100 congressional representatives presenting enough evidence of election fraud to convince Vice President Pence to block the certification of the Electoral College votes from pivotal swing states. But the violence that broke out during the protests caused most of the members of Congress involved in the plan to lose their nerve. Congress never examined the evidence Dr. Navarro collected, and at 3:44 a.m. on January 7, Pence, who had declined to intervene to stop the certification, announced that Biden had won the presidency.

“The only chance of keeping Trump in the White House was not by invading the Capitol, but by keeping it secure while our representatives debated the validity of the election using the entirely constitutional process taking place inside the halls of Congress,” wrote Frank Miele in “The Big Lie and the Elastic Truth: How to Invent a Coup.” “The riot instantly doomed any chance Trump had of prevailing in his argument that the election was stolen. So, ask yourself who benefited from the supposed coup at the Capitol. Not Trump. Not the Republicans who had put themselves on the line to support him with evidence of voting irregularities in several states. Cui bono? Who benefits? None other than the very Democrats who for the last year have worked tirelessly to discredit Trump and to find some way to disqualify him from being elected president again in 2024.”

So with these facts in mind, it is no coincidence that Dr. Navarro was arrested just days before last week’s January 6 hearings. Dr. Navarro appeared on Fox News host Tucker Carlson’s show on June 6, alleging that he had been put in handcuffs, strip-searched, denied water, and put in solitary confinement. And now, the Department of Justice wants to place a gag order on Dr. Navarro to stop him from talking to the media.

These actions show how desperate the Biden administration is to cover up what happened on Jan. 6, 2021. The radical left utilized—and possibly even provoked—the Capitol Hill riots to stop Dr. Navarro’s Green Bay Sweep. Now they are desperately trying to keep people focused on the riots instead of on the election theft or the systematic destruction of the U.S. economy resulting from the election theft.

President Trump realized what was happening and released a statement calling out the sham after they held their second hearing. “Seventeen months after the events of January 6, Democrats are unable to offer solutions,” he wrote. “They are desperate to change the narrative of a failing nation, without even making mention of the havoc and death caused by the radical left just months earlier. Make no mistake, they control the government. They own this disaster. They are hoping that these hearings will somehow alter their failing prospects.”

In his article “What Will Happen After Trump Regains Power,” my father, Trumpet editor in chief Gerald Flurry, explained that President Trump was the legitimate winner of the 2020 election. He further said that the Bible prophesies Trump’s return to power, yet he “will have to fight for it. It doesn’t have to be military action, but it certainly could. President Trump could also lead some states to secede from the union.”

“For the Lord saw the affliction of Israel, that it was very bitter: for there was not any shut up, nor any left, nor any helper for Israel. And the Lord said not that he would blot out the name of Israel from under heaven: but he saved them by the hand of Jeroboam the son of Joash. Now the rest of the acts of Jeroboam, and all that he did, and his might, how he warred, and how he recovered Damascus, and Hamath, which belonged to Judah, for Israel, are they not written in the book of the chronicles of the kings of Israel?” (2 Kings 14:26-28).

Many conservatives think Donald Trump can regain office by running again in 2024. Yet the level of “deep state” involvement in the January 6 insurrection hoax shows that things likely will not be that simple. President Trump and his supporters will have to fight against impossible odds to restore free and fair elections to America. Yet God promises to restore stability to America to give people one last chance to repent of the sins that have allowed such corruption to take deep root in America’s government.