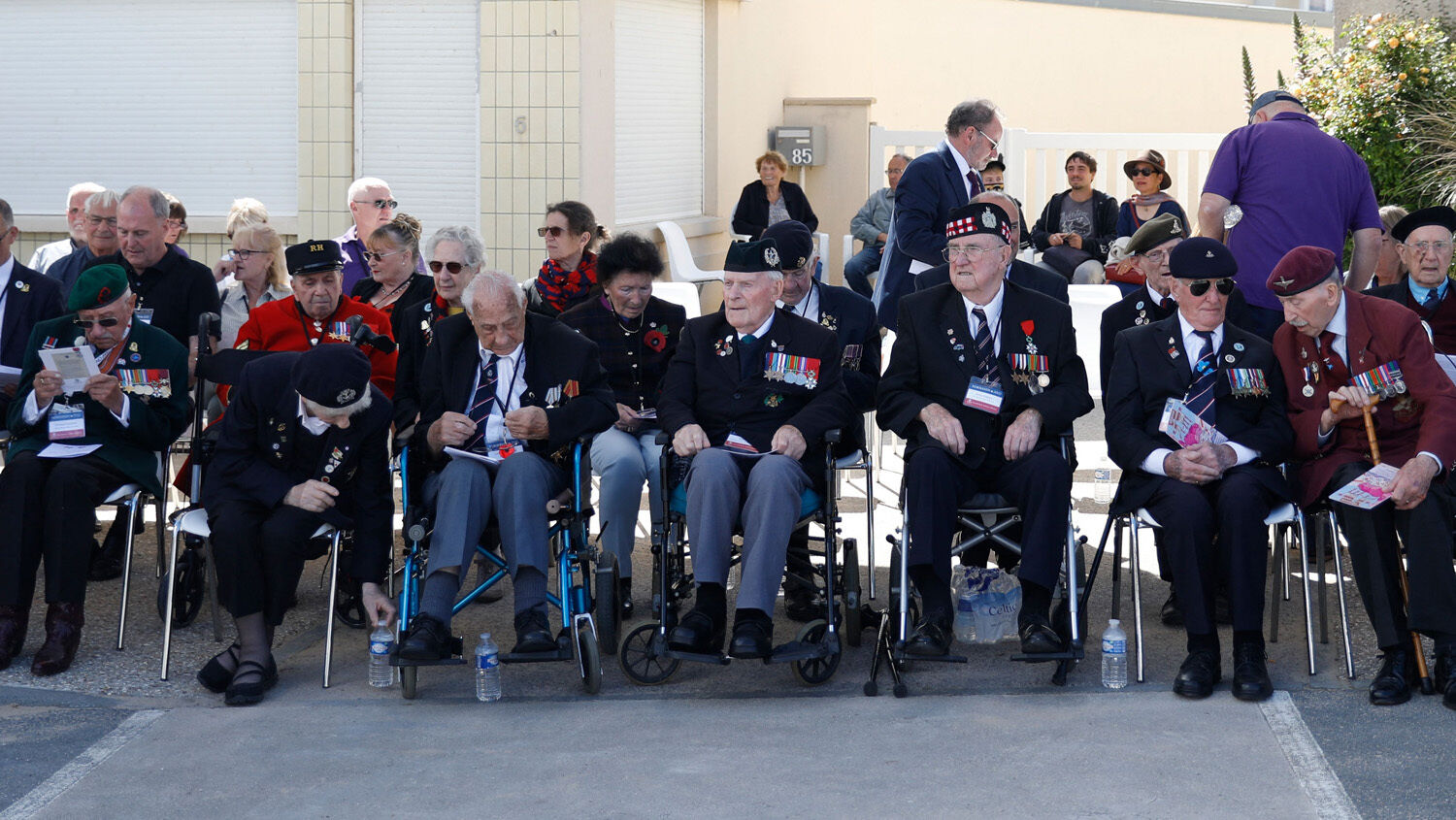 And why God is no longer giving America miracle victories

Today marks the 78th anniversary of the largest amphibious landing in human history. The D-Day invasion was an immense operation—and an immense risk. It could have been the disaster that lost the Allies the war. Instead, it was the beginning of the end for Adolf Hitler and World War ii.

In the French town of Colleville-sur-Mer this morning, almost two dozen D-Day veterans gathered for the commemoration ceremony as fighter jets flew over the American cemetery. During his commemoration address, United States Chairman of the Joint Chiefs of Staff Gen. Mark Milley told the assembled veterans that the ongoing war in Ukraine was about honoring them as the world comes together “against a determined invader.”

Milley’s speech was not as moving as it could have been, considering the incredible, indescribable sacrifices made by thousands of young men from America, Britain and the Allies on those very same shores a lifetime ago. It was not as moving as the speech President Donald Trump delivered three years ago. Milley talked about “maintaining the so-called global rules-based international order that was established by the dead who are buried here at this cemetery.”

Trump said in 2019: “We are gathered here on freedom’s altar. On these shores, on these bluffs, on this day, 75 years ago, 10,000 men shed their blood, and thousands sacrificed their lives, for their brothers, for their countries and for the survival of liberty. Today, we remember those who fell, and we honor all who fought right here in Normandy. They won back this ground for civilization.”

The D-Day invasion was much more than maintaining a “so-called global rules-based international order.”

That enormous, incredible, bloody day was about “the survival of liberty” and winning back “ground for civilization.” That is why Gen. Dwight Eisenhower ordered 6,000 landing craft, ships and other vessels carrying 176,000 troops to leave England for the trip to France. This was a massive operation to drive out a dictator from France and to end Hitler’s Third Reich.

The assault was not without risk. The Allies would have to carefully coordinate unprecedented numbers of materiel, keep precise timing, hope against hope that Germany did not further reinforce its already considerable fortifications and deployments, and pray for good weather. If everything went right, thousands would still die.

The Normandy American Cemetery and Memorial in France covers more than 170 acres and contains the graves of 9,387 of America’s military dead, most of whom lost their lives in the D-Day landings and ensuing operations. Nearby are the Walls of the Missing, in a semicircular garden. Here are inscribed 1,557 names of men who stormed the beaches and were never seen again.

These men’s actions took an almost unprecedented level of sacrifice and courage. They were not fighting for a “so-called global rules-based international order.”

In the middle of the burial area stands a circular chapel. Inside its walls, you read this inscription: “Through the gate of death may they pass to their joyful resurrection.” Most modern theologians talk about an immortal soul and know nothing about a resurrection from the dead. Yet in the 1940s, preachers were better versed in their Bibles. They knew that passages like 1 Corinthians 15 say the dead will be resurrected. The greater overall Bible knowledge that the average American serviceman had in those years gave many Allied heroes the courage they needed to fight against Hitler’s evil war machine.

Most surviving D-Day veterans are in their 90s. The events of that bloody day are fading from living memory. But if you can take some time to talk to one, or to read archives containing the papers they read, or hear the radio broadcasts they heard, you will be transported to a world where even mainstream media journalists gave glory to God for great military victories like Omaha Beach, 1944.

One of those papers was the Daily Telegraph, and if you had read it on April 7, 1947, you would have seen “The Miracle of D-Day,” by Lt. Gen. Sir Frederick Morgan. Here is what he wrote:

As the old adage had it, “Man proposes but God disposes.” There comes a point in so many of our affairs at which we hope so often for a miracle. And miracles happen still. How many of them have we not seen enacted before our eyes in these past few years? … There was Dunkirk and its flat, calm sea. Who planned that? During those fateful hours I was riding up to battle, south of the Somme … our main army was hemmed in on those northern beaches. There were many others who, like us, saw no way out, barring a miracle. There came a miracle. Then, two years later, a U-boat caught sight of the tail ship of one convoy [carrying troops from America and Britain to invade North Africa]. The German observer, apparently, thought what he saw merely worthy of routine report. Then, but a day before General Patton was due to land on the Casablanca beaches, open to the full Atlantic swell, just as it seemed inevitable that his whole affair must be called off, the wind changed from on-shore to off-shore and let the small craft in. The history of our other theaters of war will inevitably tell of many similar happenings, but I doubt if any will be such as to compare with the miracle of D-Day in 1944 ….

In the first week of June that year, German meteorologists deduced that the weather was too stormy for an Allied invasion. Erwin Rommel, the fearsome Nazi general, left his post to visit his wife. Many Nazi units engaged in training exercises rather than coastal patrols.

Then God calmed the seas.

The battle would be extremely bloody, but one German soldier, looking through binoculars and suddenly spotting an interminable, miles-long line of warships sailing toward him, knew the war was over.

Many soldiers, journalist and politicians thanked God for what He did in 1944, but how many American leaders would be willing to do the same today?

President Ronald Reagan’s commemoration address in 1984 was even better than President Trump’s address, when it came to giving God glory. He said:

The men of Normandy had faith that what they were doing was right, faith that they fought for all humanity, faith that a just God would grant them mercy on this beachhead or on the next. It was the deep knowledge—and pray God we have not lost it—that there is a profound, moral difference between the use of force for liberation and the use of force for conquest. You were here to liberate, not to conquer, and so you and those others did not doubt your cause. And you were right not to doubt.

President Reagan gave God the credit for America’s military victories in World War ii. President Trump gave America’s soldiers credit for these victories. Recalling President Trump’s comments provides a refreshing respite from the rhetoric coming from General Milley. But even his comments are a far cry from the faith-filled statement made by past presidents like Ronald Reagan, let alone our founders.

Today, Americans trust international orders, military strength, American troops, foreign allies or the “goodness” of human nature. They trust anyone and anything but God!

That is why God is not giving America miracle victories anymore. The D-Days of history are the Afghanistans of today.

Military victories are not won by armies or by force of arms. The Eternal God determines the outcome of wars! It is He—the God you have forsaken—who gives victory or defeat! His holy Word says so! But you no longer tremble before the Word of God! God Almighty says in His Word, which you ignore and reject, that if you turn from Him in the way that you have done—if you profane His holy things, and trust in gods of munitions and enemy “allies”—that He will break the pride of your power! He will cause your prestige to be dragged in the mire, until you are ridiculed and held in scornful contempt by other nations.

This is a hard message to receive, but it is time for us to face reality.

“And if ye shall despise my statutes, or if your soul abhor my judgments, so that ye will not do all my commandments, but that ye break my covenant: I also will do this unto you; I will even appoint over you terror …. And I will break the pride of your power; and I will make your heaven as iron, and your earth as brass” (Leviticus 26:15-19).

We no longer have a Ronald Reagan, an Abraham Lincoln or a George Washington who will give God glory, so God prophesies that He will take away even leaders like Donald Trump (who glorifies American military might) and instead give America leaders like Barack Obama (who actually abhors America).

America is losing pride in its power because it first lost faith in its God. The United States was born and sustained by godly miracles. Yet instead of continuing to trust God, the American people have chosen to trust in themselves. They have turned from the God who so richly blessed them. As a result, God has stopped giving America miracle victories. He has truly broken the pride of America’s power. On this 78th anniversary of D-Day, remember the God who gave America its power, its blessings and its victories.

Request your free copy of The United States and Britain in Prophecy, by Herbert W. Armstrong.