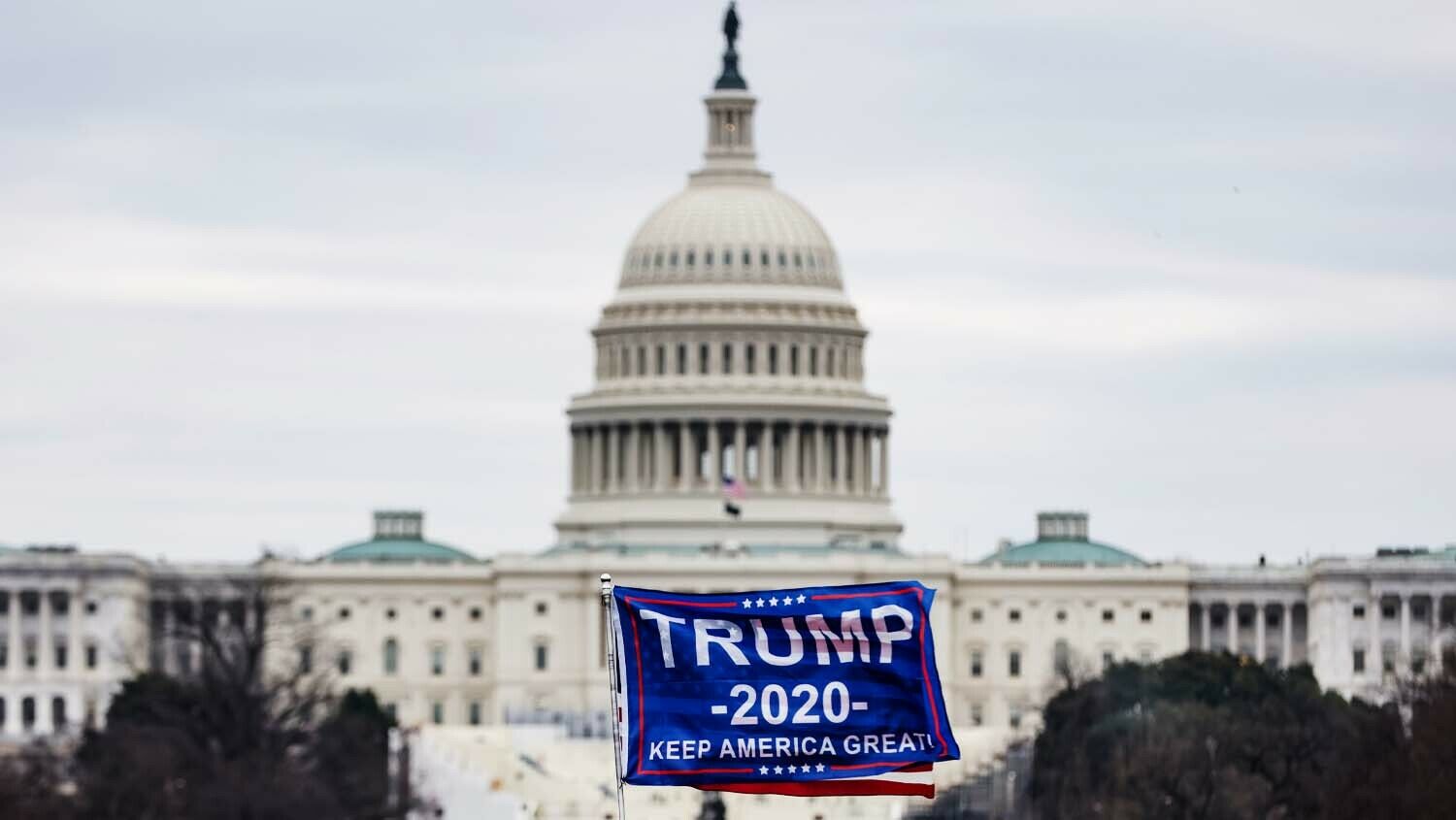 The anniversary of the Capitol Hill protest is being weaponized to shut down election audits.

Joe Biden and Kamala Harris proved how much they still fear Donald Trump by delivering equally awful speeches marking the anniversary of Jan. 6, 2021. Anyone who has seen video footage of the Capitol Hill protest knows that it was a peaceful political protest against election theft that tragically turned violent when a few dozen agitators, including known leftist radicals posing as Trump supporters, breached the United States Capitol, possibly in part due to fbi involvement. But the Biden administration is intent on turning this protest into the greatest attack on American democracy since thousands were mass-murdered by al Qaeda Islamist terrorists on Sept. 11, 2001.

During his 24-minute speech, Biden mentioned the “truth” 16 times in his effort to persuade people that the Capitol Hill protest was a violent coup attempt. Yet his repeated references to “the real history,” “the real facts,” “the real truth,” “God’s truth” and “the light of the truth” only made him seem more like a liar.

Most of the 200,000 Capitol Hill protesters remained peaceful. The government estimates less than 2 percent of these protesters are guilty of a federal crime, and that half of these criminals are guilty of nothing more serious than trespassing and disorderly conduct. Only a few hundred are guilty of assaulting the police. There was never any danger that the U.S. government was going to be overthrown by the QAnon Shaman or other people walking through the halls.

Why is it so important to Biden, Harris and those controlling this regime that you think that January 6 was an “armed insurrection”—when the only shot fired was a police officer killing a Trump supporter?

They are covering for something.

Shortly before Biden spoke, Kamala Harris told the nation, “Certain dates echo throughout history, including dates that instantly remind all who have lived through them—where they were and what they were doing when our democracy came under assault. Dates that occupy not only a place on our calendars but a place in our collective memory. Dec. 7, 1941. Sept. 11, 2001. And Jan. 6, 2021. … What the extremists who roamed these halls targeted was not only the lives of elected leaders. What they sought to degrade and destroy was not only a building, hallowed as it is. What they were assaulting were the institutions, the values, the ideals that generations of Americans have marched, picketed and shed blood to establish and defend.”

The only fatality of the protest was an unarmed Trump supporter, Ashli Babbitt, who was shot to death by a Capitol police officer. Yet Harris directly likened the Capitol protests to Pearl Harbor and 9/11. She wants to turn “Insurrection Day” into a new national holiday that the left can weaponize to ensure that the 2020 election fraud is never properly investigated. It does not take a lot of investigative research to see through this hoax.

Two of the agitators most responsible for stirring up violence have not been prosecuted because they were leftist infiltrators. The first is John Sullivan, a well-known leftist agitator who founded the group Insurrection USA. Sullivan was videoed wearing a “President Trump 2020” hat and attempting to whip up a crowd outside the Capitol. He even demanded that they set it on fire at one point. He was there when Babbit was killed—and tried to whip up the crowd as she lay bleeding on the floor. He was arrested but released a day later and interviewed by cnn about his account of the violence. cnn did not identify him as a leftist agitator.

The other agitator is Ray Epps. We have video evidence from the night before the protests of Epps wearing a red Trump hat inciting the people around him to storm the Capitol the next day. Yet the crowd of Trump supporters around him yells, “No!” and begins chanting, “Fed, fed, fed.” They immediately suspected someone trying to incite lawlessness of being an agent of the federal government. Yet despite the evidence that Epps tried to incite others to violence, he has not been arrested like so many other agitators have been. Maybe it has something to do with a man he was photographed with that same night: John Sullivan.

The evidence shows the fbi infiltrated the Capitol protests to stir up violence that the Washington political establishment could use to shut down investigations into the stolen election. Now the New York Times is running headlines like “Every Day Is Jan. 6 Now,” while Time magazine says, “January 6th May Have Been Only the First Wave of Christian Nationalist Violence,” and the Atlantic says, “January 6 Wasn’t a Riot. It Was War.”

This is what it’s like to live in a propaganda machine.

The radical left is at war with Donald Trump and his supporters, and the primary way they fight back against efforts to investigate voter fraud is to slur anyone concerned about fraudulent ballots as an insurrectionist.

“As we approach the anniversary of the January 6 ‘insurrection,’ the unspoken truth is that Donald Trump had nothing to gain and everything to lose by the violent assault on the Capitol that day,” wrote Frank Miele in his article “The Big Lie and the Elastic Truth: How to Invent a Coup.” “The only chance of keeping Trump in the White House was not by invading the Capitol, but by keeping it secure while our representatives debated the validity of the election using the entirely constitutional process taking place inside the halls of Congress. … The riot instantly doomed any chance Trump had of prevailing in his argument that the election was stolen. So ask yourself who benefited from the supposed coup at the Capitol. Not Trump. Not the Republicans who had put themselves on the line to support him with evidence of voting irregularities in several states. Cui bono? Who benefits? None other than the very Democrats who for the last year have worked tirelessly to discredit Trump and to find some way to disqualify him from being elected president again in 2024.”

You can’t argue with logic like that. To call attention to election theft, President Trump supported a “Save America” rally in Washington, D.C., on January 6 so that the congressmen meeting to certify the election could get a feel for how many people believed it was fraudulent. But the agitators and infiltrators who stormed the Capitol completely undermined what President Trump was trying to do. These people had no chance of overthrowing the U.S. government, so their actions only benefited the incoming Biden administration.

Republican senators like Kelly Loeffler of Georgia and James Lankford of Oklahoma had promised to object to the certification of Joe Biden’s “victory” on Jan. 6, 2021, but then either cowardly declined or were prevented from doing so after the staged insurrection. Rep. Paul Gosar of Arizona and Sen. Ted Cruz of Texas did object to Arizona’s election results before the Capitol was breached, but their objections were overruled soon after the building was resecured. Later that night, Rep. Scott Perry of Pennsylvania and Sen. Josh Hawley of Missouri objected to Pennsylvania’s election results. Again, both houses overruled them.

The radical Democrats’ ploy worked: Sensationalize a protest hijacked by rabble-rousers and use it as a pretext to certify the stealing of a presidency and amass more power to destroy what is left of the republic. Now, a year later, the Biden administration still talks about January 6 in a bid to legitimize an illegitimate regime.

In his article “What Will Happen After Trump Regains Power,” my father, Trumpet editor in chief Gerald Flurry, explained that President Trump was the legitimate winner of the 2020 election. He further explained that the Bible prophesies Trump will return to power, yet he “will have to fight for it. It doesn’t have to be military action, but it certainly could. President Trump could also lead some states to secede from the union.”

“For the Lord saw the affliction of Israel, that it was very bitter: for there was not any shut up, nor any left, nor any helper for Israel. And the Lord said not that he would blot out the name of Israel from under heaven: but he saved them by the hand of Jeroboam the son of Joash. Now the rest of the acts of Jeroboam, and all that he did, and his might, how he warred, and how he recovered Damascus, and Hamath, which belonged to Judah, for Israel, are they not written in the book of the chronicles of the kings of Israel?” (2 Kings 14:26-28).

Many conservatives think that Donald Trump can regain office by running again in 2024. Yet the level of fbi involvement in the January 6 insurrection hoax shows that things likely will not be that simple. President Trump and his supporters are going to have to fight against impossible odds to restore free and fair elections to America. Yet God promises to restore stability to America to give people one last chance to repent of the sins that have allowed such corruption to take deep root in America’s government.