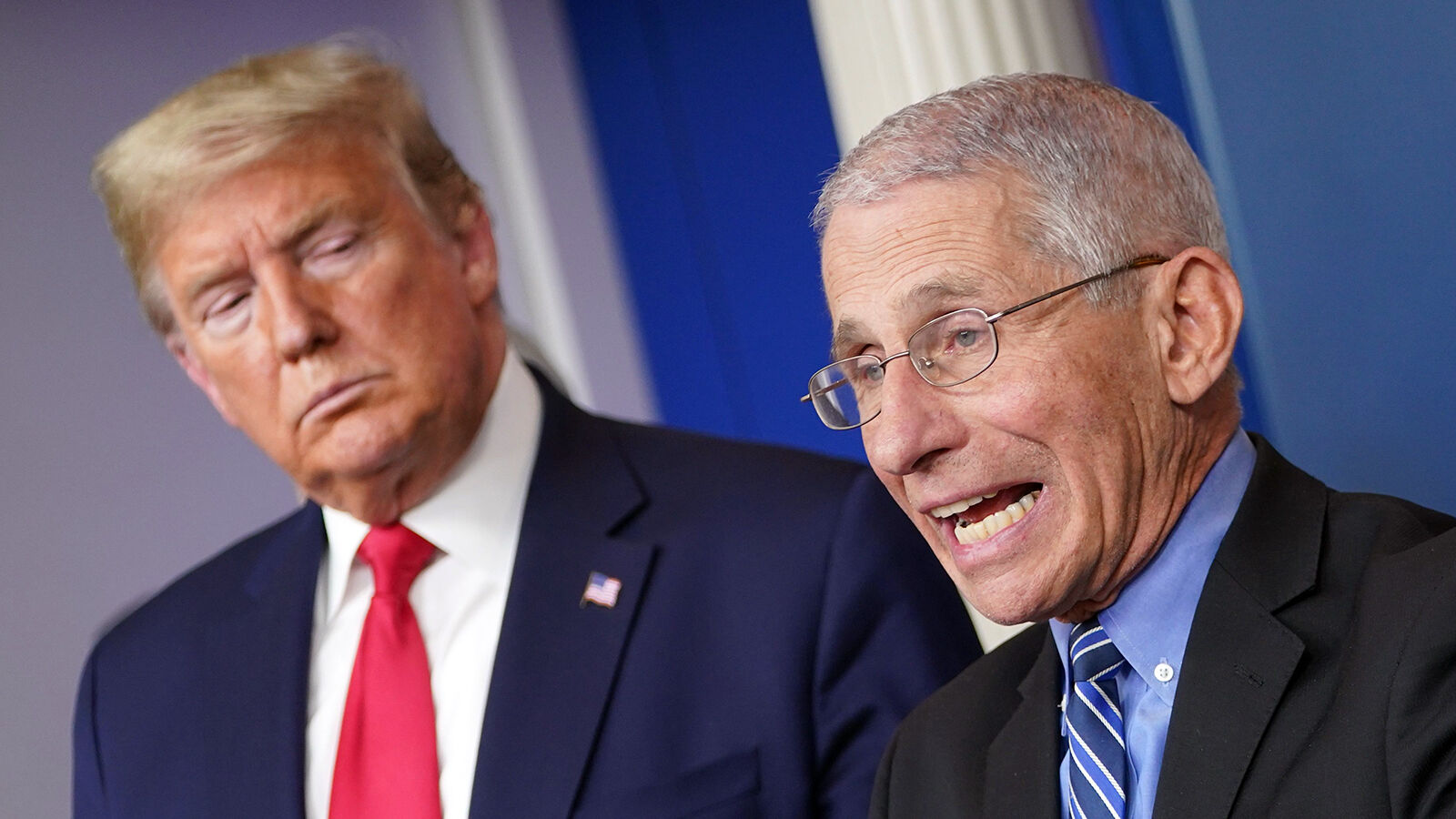 US President Donald Trump listens Dr. Anthony Fauci speak during the daily briefing on the novel coronavirus, COVID-19, at the White House on March 24, 2020, in Washington, DC.
MANDEL NGAN/AFP via Getty Images

Could the whole pandemic actually trace back to Dr. Anthony Fauci?

United States President Donald Trump was right again. He said covid-19 could have leaked from the virology lab in Wuhan, China. That was in April 2020—more than a year ago. And the propaganda media has been hammering President Trump and any other leader or analyst or everyday person who states some obvious, straightforward facts about the origins of this pandemic. They have taken turns vociferously, creatively, smugly, incessantly blasting people for believing in a deranged, dangerous, conspiracy theory—for a year!

Now that they have trashed and repeatedly trampled everyone’s reputation and credibility for months and months, the propagandists are quietly admitting that President Trump was right. They have accomplished their agenda of forcing the president out of power, and now it apparently serves their agenda to quietly, subtly admit the truth. This is just another perfect illustration of the Trump Derangement Syndrome the media have been trapped in since 2015.

Rewind to the April 30, 2020, White House press conference when a reporter asked President Trump: “Have you seen anything at this point that gives you a high degree of confidence that the Wuhan Institute of Virology was the origin of this virus?” The president responded: “Yes, I have. Yes, I have. And I think the World Health Organization should be ashamed of themselves, because they’re the public relations agency for China.”

Just days after President Trump made these comments, Secretary of State Mike Pompeo told abc News that there was “enormous evidence” that covid-19 originated in a laboratory in the Chinese city of Wuhan. The Global Times newspaper, which is owned by the Communist Chinese regime, claimed that Pompeo had “stunned the world with groundless accusations.” Dr. Shi Zhengli, who directs the Center for Emerging Infectious Diseases at the Wuhan Institute of Virology, demanded that President Trump apologize. The propaganda media rallied to whom? The president? Or the Communist Party of China? You probably know the answer.

abc’s Jonathan Karl recently admitted that the media dismissed the Wuhan lab leak theory simply because Republicans proposed it. And cnn is now reporting that the Biden administration shut down a State Department effort launched by Mike Pompeo to prove the coronavirus originated in a Chinese lab. Apparently, the Democrat-media complex was desperate to keep the origins of covid-19 secret. In many ways, the radical left thinks more like the Chinese Communist Party than like their fellow Americans in the Republican Party.

Last year, my father, Trumpet editor in chief Gerald Flurry, wrote an article titled “Where Is the China-America Clash Leading?” He noted that the U.S. had withdrawn funding to China in 2014 due to fears over controversial experiments to make pathogens more virulent. An unclassified cable warned of “inadequate safety practices and management weaknesses” as researchers at the Wuhan Institute of Virology “conducted research on coronaviruses from bats.” The cable said the lab had “a serious shortage of appropriately trained technicians and investigators needed to safely operate this high-containment laboratory.”

The propaganda media decision-makers knew these same things that the rest of the world knew. They knew that China was conducting dangerous research on bat coronaviruses, but still slurred Donald Trump and Mike Pompeo as conspiracy theorists—and, when possible, “racists”—for warning everyday Americans of the danger.

Why would they do something so despicable?

Evidence is accumulating that indicates they did this to protect the reputation of the director of the U.S. National Institute of Allergy and Infectious Diseases. His name is Dr. Anthony Fauci.

PJ Media recently reported that Dr. Fauci wrote an article in 2012 saying that “gain of function” research on bat coronaviruses was worth the risk of a pandemic if it increases our knowledge of diseases. “In an unlikely but conceivable turn of events, what if that scientist becomes infected with the virus, which leads to an outbreak and ultimately triggers a pandemic?” he wrote for the American Society for Microbiology. “Scientists working in this field might say—as indeed I have said—that the benefits of such experiments and the resulting knowledge outweigh the risks.”

Only two years after Fauci defended “gain of function” research, it was banned by the U.S. government.

But apparently Dr. Fauci found a loophole because he is now admitting to U.S. lawmakers that, under his guidance, the National Institutes of Health earmarked $600,000 for the Wuhan Institute of Virology and funneled it to the Chinese lab through the non-profit EcoHealth Alliance. This money was used to study whether bat coronaviruses could be transmitted to humans.

This research may have caused the covid-19 pandemic.

Even Joe Biden is now admitting that covid-19 may have been the result of a lab accident. A logical person has to consider that the entire media narrative that the Wuhan lab leak was a “conspiracy theory” was a lie! It was used to attack President Trump and hide the fact that the entire covid-19 pandemic may actually be Dr. Fauci’s fault.

Why did the U.S. need to fund a Chinese laboratory to research coronaviruses? Why would Dr. Fauci’s taxpayer-funded institute ever need to send grants to a laboratory in China?

When Dr. Fauci was questioned by Sen. Rand Paul, he said his institute had to send money to the Wuhan Institute of Virology because horseshoe bats do not live in America, and that he was sure the Chinese were not using the funds for “gain of function” research. But he was forced to grudgingly admit that he trusted the Communist Party in China to use the money America provided to study diseases and could not “guarantee that a grantee has not lied to us, because you never know.”

In Fauci’s world, if a Communist Party scientist says she is using U.S. research grants to study diseases, she must be believed and paid. But if the president of the United States says she may be misusing those grants, he is a conspiracy theorist or liar.

And now a previously undisclosed U.S. intelligence report has revealed that the first three people to catch covid-19 were all researchers at the Wuhan Institute of Virology. Biden and other Democrats have to deal with this as they explain their embarrassing closure of Pompeo’s investigation. Not only did covid-19 escape the Wuhan Institute of Virology, it escaped after being bioengineered by Communist Party scientists using money received from the National Institute of Allergy and Infectious Diseases and Dr. Fauci.

“The coronavirus crisis has exposed the true nature of the Chinese Communist Party as nothing ever has,” my father wrote last August. “It should be a sobering warning to the entire world! … For years, China has worked ferociously to surpass the U.S. in economic power and scientific advancements. By now, it probably has overtaken America by some economic measures. The Chinese Communist Party (ccp) is also amassing staggering levels of military power. It is bent on asserting more and more control not just over the people of China, but over the territory and people in the nation’s periphery. Meanwhile, the coronavirus that the ccp unleashed onto the world has cost the U.S. trillions of dollars. America’s national debt keeps climbing toward $30 trillion. This weakness will be a major factor that strips the U.S. of its superpower status and a lot more.”

Now we have even more documented proof that China was developing covid-19 as a weapon and that the deep state agents in the United States were helping them do so. covid-19 is a man-made plague engineered by radical leftists—on both sides of the Pacific Ocean. You would think that more people in America’s government would be suspicious of the Chinese Communist Party, but it is like the Prophet Isaiah foretold: “Ah sinful nation, a people laden with iniquity, a seed of evildoers, children that are corrupters: they have forsaken the Lord, they have provoked the Holy One of Israel unto anger, they are gone away backward. Why should ye be stricken any more? ye will revolt more and more: the whole head is sick, and the whole heart faint. From the sole of the foot even unto the head there is no soundness in it; but wounds, and bruises, and putrifying sores: they have not been closed, neither bound up, neither mollified with ointment” (Isaiah 1:4-6).

The fact that that the National Institute of Health was funding Communist biotechnology research, while the propaganda media attacked anyone who tried to talk about the truth shows the depth of America’s spiritual sickness. It’s far worse than any biological pandemic. Because of spiritual sickness, America’s political, economic and military power is draining away!