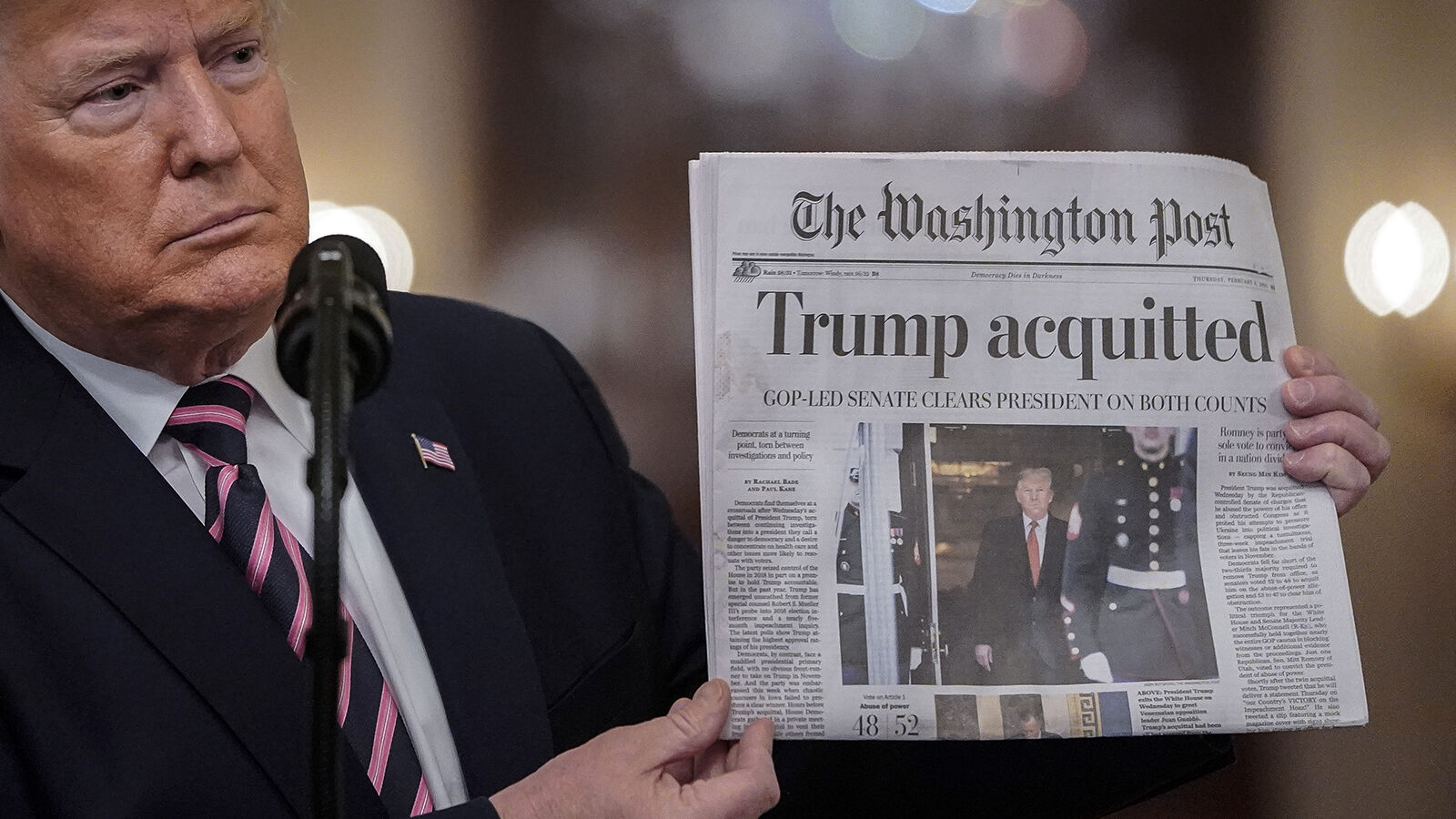 U.S. President Trump holds a copy of the Washington Post after the U.S. Senate acquitted him on two articles of impeachment.
Drew Angerer/Getty Images

We started the year with Iran-controlled Iraqi militias in the middle of an assault on the U.S. Embassy in Baghdad. These militias had just conducted a rocket attack on an Iraqi airbase that killed an American. The U.S. responded with air strikes on the responsible group, Kata’ib Hezbollah, killing 25, and stating that the strikes were a message to “the Iranian regime.” Hundreds of militia members and their supporters responded by breaking into the outer area of the Embassy compound, spraying graffiti, setting fires and chanting, “Death to America.” This was the biblically prophesied king of the south, radical Islam, led by Iran, getting extremely bold.

So bold, in fact, that Iran’s second-most powerful man and the commander of its terrorism operations, among other things, arrived in Iraq on January 3 to personally conduct Iran’s response to the U.S. reinforcing its embassy. Then the situation suddenly became even more dramatic when the U.S. unexpectedly killed him in a drone strike at the Baghdad airport. The Iraqi leader of the Popular Mobilization Forces militias, Abu Mahdi al-Muhandis, was with Suleimani and was also killed. This decisive move was ordered by U.S. President Donald Trump and is part of the resurgence he is leading (2 Kings 14:27).

At the same time, President Trump had been impeached by the House of Representatives. His trial in the Senate began January 16, a prophetically significant date, and ended February 5, when he was acquitted. Like the Mueller investigation, the impeachment exposed the power and willingness of Democrats to try to overturn the results of the last presidential election—and the next one. Leaks were planted the day before the Senate vote on whether to have more witnesses, then again the day before they voted to acquit. There are a lot of evil people colluding to bring down the presidency and to bring down the constitutional government of the country as a whole. Yet this president just keeps going forward. This impeachment has highlighted the fulfillment of Bible prophecy.

As all this was going on, President Trump announced the political element of his new peace plan between Israelis and Palestinians on January 28, the Middle East “deal of the century,” as he called it. It amounts to an ultimatum for the Palestinians. The flashpoint of all end-time prophecy is Jerusalem, so this effort will inevitably lead to some major events in the Middle East and beyond, and those events will not be peaceful. But for now, the resurgence continues.

Last week, President Trump gave his State of the Union speech, was acquitted in his impeachment trial, and took a victory lap of sorts, sharply criticizing former President Barack Obama’s “deep state.” One talk radio commentator noted how close America had come to becoming a police state, saying, “We would have never had a free and fair election ever again.” But God intervened to save America—temporarily.

Meanwhile, another world leader became even more powerful in January as Russian President Vladimir Putin announced his sweeping changes to Russia’s Constitution. The changes are obviously intended to enable him to retain power over Russia for the rest of his life. In “Putin the Czar Is More Dangerous Than Ever to the U.S.,” Bloomberg wrote, “Vladimir Putin will be the czar of all the Russians for another decade and more. Only health appears likely to change the course upon which he now sails …. Much like President Xi Jinping in China, Putin will now be able to shape events and planning indefinitely.” This piece draws parallels between the two powers of Asia and their two powerful leaders. Authoritarians in Russia and China are now in power for life, enabling them to fulfill their destructive prophetic roles as “the kings of the east” (see Ezekiel 38).

Germany has had the opposite problem. Chancellor Angela Merkel, who first took office almost 15 years ago, has announced that she will not seek reelection in 2021. She had been grooming a successor, Annegret Kramp-Karenbauer, but then another political earthquake struck German politics last week. During state elections in Thuringia, Merkel’s Christian Democratic Union crossed a line and negotiated with the far-right Alternative für Deutschland to get a candidate elected from a third, moderately right-wing party. It was the first time in a lifetime that the far right has played a role in government. Thuringia is also where the Nazis first came to power in 1930, and now a far-right party played a role in forming the government in the exact same place! The backlash included criticism by Chancellor Merkel herself, Kramp-Karrenbauer suffering major political damage, and the new state premier resigning after a day in office. As we wrote in Monday’s Trumpet Brief, with 2020 already a tumultuous year, Germans now sail into the storm without a captain.

Meanwhile, we’ve had the ongoing bushfires in Australia, which have burned more than 70,000 square miles and killed 34 people. More than a billion animals are estimated to have died, with 113 endangered species being brought closer to extinction. The cost to the Australian economy is estimated to exceed $3 billion. Smoke from the fires reached New Zealand and, eventually, South America, almost 7,000 miles away.

We also had something much deadlier spreading internationally: coronavirus. A new strain of coronavirus that originated in China has infected more than 45,000 people, killing more than 1,100. The Chinese government quarantined tens of millions of people, but the deadly disease spread to other countries. This is an end-time disease pandemic, prophesied in your Bible. Ezekiel 38:22 states, “And I will plead against him with pestilence and with blood; and I will rain upon him, and upon his bands, and upon the many people that are with him, an overflowing rain, and great hailstones, fire, and brimstone.” You can read more about this prophecy in The Four Horsemen of the Apocalypse booklet.

At the same time, the embattled British royal family hit a major crisis when a conflict between Prince Harry and his wife and the rest of the family broke out into the open. Prince Harry and Meghan Markle abruptly announced on Instagram that they “intend to step back as ‘senior’ members of the royal family” and would move to North America for part of the year. You can learn about the prophetic significance of this in my father’s September 2017 Philadelphia Trumpet article “The Fall of the British Royal Family” and in his newest book, The New Throne of David.

All of this is besides perhaps the most significant prophesied event in decades!

On January 31, Britain left the European Union. Herbert W. Armstrong prophesied consistently for decades and decades that Europe would become the mortal enemy of Britain, as well as of the United States and Israel. In 1956 he wrote, “Germany is the economic and military heart of Europe. Probably Germany will lead and dominate the coming United States of Europe. But Britain will be no part of it!” But in 1973, Britain joined the European Economic Community. People thought he got it all wrong, that Britain and Europe were doing just the opposite of what he had said. Mr. Armstrong wrote that year, “Britain is going to look back on Monday, Jan. 1, 1973, in all probability, as a most tragically historic date—a date fraught with ominous potentialities!” He maintained his forecast, based on numerous Bible prophecies. Now that prophetic forecast has proved true in a dramatic way.

This has been a year of Bible prophecy! Have you been watching?

God warns us, “Knowing the time, that now it is high time to awake out of sleep: for now is our salvation nearer than when we believed. The night is far spent, the day is at hand: let us therefore cast off the works of darkness, and let us put on the armour of light” (Romans 13:11-12).

Now it is HIGH TIME! It is not possible to take these warnings too earnestly! You must keep abreast of current world events. Prophecy is rapidly being fulfilled throughout the world! As Jesus Christ commanded, watch, lest you be suddenly ensnared in the evil day.

“And take heed to yourselves, lest at any time your hearts be overcharged [means to be weighed down or oppressed] with surfeiting, and drunkenness, and cares of this life, and so that day come upon you unawares. For as a snare shall it come on all them that dwell on the face of the whole earth” (Luke 21:34-35).

Jesus Christ’s coming will be sudden and unexpected to those in this world and those who are not watching and praying. That is why Christ gave this warning to His disciples. Those who believe Him and obey Him will not be caught off guard if they watch and pray.

If you are a true follower of Christ, you will unburden yourself from the cares and sins of this world. You will be spiritually sober. With God’s help, you will purge sins from your life like materialism, worldliness and carnal pursuits like wrong entertainment. You will simplify your life and reorient it to revolve completely around God and His way of life!

“Watch ye therefore, and pray always, that ye may be accounted worthy to escape all these things that shall come to pass, and to stand before the Son of man [at His coming]” (verse 36).

Jesus Christ warns you that unless you are zealously watching—and praying—you will not be ready for His return! “Watch” means to monitor world events and to connect them to Bible prophecy. That means you have to study your Bible closely and the revelation God has given on who those prophecies are about and what those prophecies mean. “Pray” means to constantly, fervently ask God to open your eyes to understand the spiritual truth revealed in your Bible.

“The fact that Christ’s return is so near should change our behavior,” my father writes in The Epistles of Peter—A Living Hope. “The knowledge of Christ’s imminent return should make us URGENT SPIRITUALLY.”

In early 2020, more than ever, we are facing terrifying times immediately ahead of us. Open your eyes. See the coming world catastrophe prophesied by God in your Bible. And let that reality motivate you to change your life, to overcome your sins, to focus on God, to commit to His work, to give His message to the world. It is a message of the gravest warning, but it is also a message of the greatest hope: the desperately needed return of Jesus Christ!

E-mail your thoughts about the pace of prophetic events to sflurry@pcog.org. Thank you for your support!