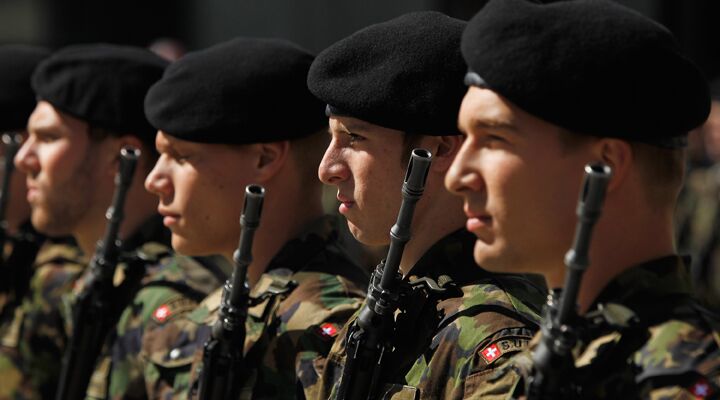 As protests sweep Europe, and states threaten to proclaim independence, Switzerland is worried about mass unrest.

Switzerland staged military exercises in eight towns across the country last month, in preparation for a complete breakdown in Europe.

In the “Stabilo Due” exercises, Switzerland practiced dealing with spillover from warring factions from Europe or the sudden influx of refugees from Greece, Spain, Italy, France and Portugal.

The drill took years to organize and involved 2,000 troops from the infantry, air force and special forces. “I can’t exclude that in the coming years we may need the army,” said Swiss Defense Minister Ueli Maurer.

Schweizer Soldat magazine reported that head of the army, André Blattmann, wants to station 1,600 soldiers around strategic points such as airports, manufacturing plants and the headquarters of international organizations in Geneva.

Some in Switzerland believe the army drills are just an excuse to justify conscription. Is Switzerland right to worry about unrest on its borders? Just consider the array of threats rising in Europe.

Riots and protests are becoming so frequent in Europe that they’re barely news. Here’s a summary of recent protests:

These are purely protests caused by the economic crisis. Ethnic and religious tensions also sparked protests, with Muslim demonstrators denouncing the infamous Mohammed YouTube video, and women protest the light sentencing of gang rapists with Muslim-sounding names (media reports don’t mention the religion or appearance of the rapists, but those whose names are published sound Islamic). Roma gypsies staged international protests October 7.

Bigger protests are to come. The European Trade Union Confederation has called for a pan-European day of action for November 14. Trade unions in Portugal, Spain and Greece will hold a general strike. Unions are also planning action in Cyprus and Malta. Millions will probably be out protesting that day.

The protests are definitely getting more serious. Especially in Portugal. Reuters wrote that the nation had a “remarkably high level of acceptance for cost cutting.” But recently, something snapped. Now “that mood has changed dramatically in recent weeks, and support for the center-right government is crumbling.” Portugal’s “stoic acceptance of austerity, once much admired, has turned to anger,” Reuters wrote.

Since the end of September, protests have occurred almost daily. Anger is surging across Europe. Already some of the protests are erupting in violence.

Another symptom of this anger is the separatism spreading throughout Europe. In Spain, Belgium, Britain, Italy and even Germany, key regions want to split off from the whole. The rise of separatist sentiments across the Continent is too widespread to be a coincidence. As the French la Tribune elegantly put it: “It would be naive to believe that the winds which have advanced these movements in recent months are completely independent of the storm that has swept across Europe over the last two and a half years.”

Across Europe, the richer regions feel they are being cheated by their national governments. Catalonia is one of Spain’s richest areas and an engine of growth for the whole economy. It generates more than enough money to finance itself, but under the Spanish constitution it has to subsidize the rest of the nation. Now Catalonia needs a bailout and faces the prospect of having to hand over hard-won regional powers to Madrid in exchange for getting some of its own money back.

Last month, 1.5 million protested for Catalonian independence. Separatist leader Artur Mas is planning to defy the Spanish government by calling for a referendum on Catalonian independence. He has called regional elections for November 25, hoping that his alliance of parties will emerge as the clear winner, without the need for coalition partners. With solid regional support, he plans to call for a referendum. Polls indicate that Catalonians would vote for independence, given the choice. The Spanish government has said any referendum would be unconstitutional, putting Catalonia on a dramatic collision course with the federal government.

Similar pressures are ripping Belgium apart. Last year, the nation famously set a world record by going 535 days without a government, as the bitterly divided Dutch-speaking Flemish and French-speaking Walloons failed to agree on a coalition.

The period without a government ended last December, but the issues dividing the regions remain unresolved. The majority of Flemish want more control over their finances and government. They too are fed up with subsidizing the rest of the nation.

On October 14, a separatist party, the New Flemish Alliance (n-va) won a shocking victory in local elections. The n-va wants more than just taxing power: It wants a gradual breakup of Belgium. In Antwerp, Belgium’s second largest city, the n-va won around 38 percent of the vote. Its leader, Bart De Wever, will become the next mayor of the city.

“In municipal elections six years ago, the n-va was a nascent party with few votes across northern Flanders,” wrote the Associated Press, “but by 2010 national elections it had become the biggest party in the region.” Now it has won the elections in 20 out the 35 districts in Flanders.

Italy’s northern regions feel the same way as the Flemish and Catalonians, but separatist parties aren’t doing as well because of national politics. Many of their leaders were mired in scandal with the government of Silvio Berlusconi.

Even in Germany, there are growing calls for Bavarian independence. Fueled by the usual grievances, Wilfried Scharnagl, a veteran Christian Social Union (csu) politician and long-time friend of former Bavarian premier Franz Josef Strauss, published a book called Bavaria Can Go It Alone. Despite Scharnagl’s influence, no major Bavarian party is calling for independence. But Bavaria and Hess have launched court cases to try and reduce the amount of tax money they send to subsidize the poorer regions.

Across the Continent, the different separatist movements are all part of the same phenomenon, and are all caused by the financial crisis. The only exception is Britain. Scotland wants independence, but not because its tax money is going to England and Wales. In fact, some polls suggest Scottish independence is more popular in England than Scotland.

At the Trumpet, we’ve noted before the parallels between today and the 1930s. European nations are under exactly the same pressures. Just as back then, the economic crisis led to mass anger and discontent with the current political order. And just as before, protests and separatism were one of the first symptoms.

This anger will only get worse and turn to desperation as the economy worsens. Angry, desperate people are one of the most destabilizing forces on the planet. They’ll do almost anything if they think it will solve their problems.

Already, in Greece a lot of that anger is being directed at immigrants. Many are voting for Nazis out of a belief that they can help the situation.

Switzerland is right to be worried. But the threat is greater than it realizes. One of the reasons the Swiss cite for concern is military budget cuts. Under financial pressure, some European armies could no longer afford the modern systems necessary to keep their armies up to date, the Swiss defense minister argued. He warned that these countries could face “blackmail.”

He’s right. Faced with mounting unrest, these nations could be forced to turn to the EU and to Germany for the money and equipment necessary to keep their nation together. This would come with tough conditions.

The unrest and separatism could help force troubled economies give in to German control. The unrest could form part of the pressures that push key eurozone nations together into a superstate.

“Social unrest and riots will eventually force Europeans to succumb to a strong united government of Europe, led ultimately not from Brussels, but from Berlin,” wrote Trumpet editor in chief Gerald Flurry back in 2009.

This superstate is something that could really threaten Switzerland.