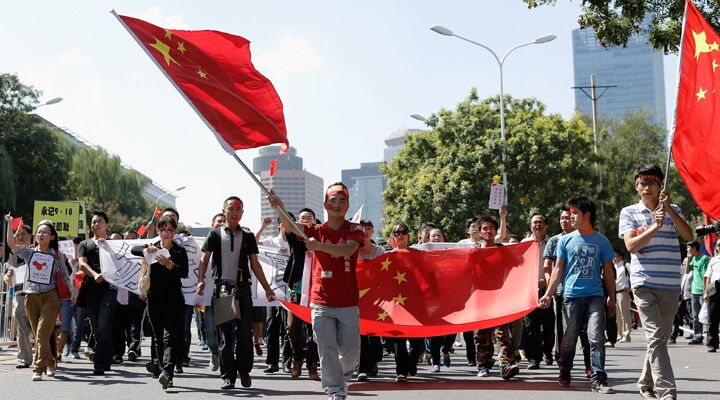 Is China’s threatened bond attack on Japan a warning for America?

A senior adviser to the Chinese government has called for an economic attack on Japan’s bond market to crash the yen and drive the country into submission, reported the Telegraph on September 18.

The threat comes as Japan and China vie over ownership of the Senkaku group of islands located between the two nations.

Jin Baisong, who holds a position at a branch of China’s Commerce Ministry, noted that China has become Japan’s most important creditor. China should use its $230 billion of Japanese bonds “in the most effective manner” and ignite a budgetary debt bomb in its eastern neighbor, he said.

He also indicated that China should starve Japan of rare earth elements. China supplies around 95 percent of the world’s rare earth metals, which are used in many hi-tech applications including military machinery. “It’s clear that China can deal a heavy blow to the Japanese economy without hurting itself too much,” he said.

Jin’s threats may be directed at Tokyo, but America should take note because they could just as easily be aimed at the Red, White and Blue—and maybe they are.

Let’s pretend that China did follow through with its threat and dumped its mass of Japanese bonds. What would happen? It would completely flood the market. The unbending laws of supply and demand would kick in, causing prices to hit the dirt and interest rates to blow sky high.

Japan’s response would dictate how far the economic shrapnel spreads. The Japanese government could react with its economic Gatling guns by opening up the printing presses and paying China back with newly created money. Although politically satisfying, this would have negative and immediate implications for the value of the yen. $230 billion worth of newly created yen would spike the money supply, causing its value to implode. China would get its money, but it wouldn’t be worth as much as it thought. It could also be hugely damaging to the yen’s reputation. If confidence in the yen breaks, Japan will feel like it has been carpet-bombed with inflation.

Alternatively, and more likely, Japan could play hot potato with the live grenade.

America owes Japan more than $1.1 trillion. If Japan sells a portion of its U.S. government bonds to pay China, then instead of Japan having a yen problem, America may have a dollar problem.

Washington can’t afford to ignore this growing dispute between China and Japan.

Under President Obama, America has publicized its Pacific Maritime strategy as the cornerstone of its defense policy. Under this reorientation of American power, America is working to string together the various smaller Pacific nations into an economic and military alignment against China. In this context, America has often referred to its ally Japan and its many islands as its “unsinkable aircraft carrier” in the region. Japan is America’s most important Asian ally.

If America does not strongly back Japan, it risks having its Pacific strategy revealed as an empty shell. If China can force Japan to back down, it will be a huge signal for other Southeast Asian nations to submit to China. Japan’s only other choice would be rearmament. To this point, Japan has opted for a small military in exchange for American support. If U.S. support is ever seen as unreliable, Japan will be forced to re-militarize. A rearmed Japan will be much more independent and less America-centric in its policies.

Yet America has to be very careful in its dealings with China too. America conducts 2½ times more trade with China than it does with Japan. The U.S. federal government has also borrowed a whopping $1.3 trillion from China (and Hong Kong). China also owns another half trillion or so in other U.S. dollar debt assets.

China has its fingers on the pin of a much bigger hand grenade.

And there is no doubt that China considers America’s debt as a weapon to be used too. Back in 2007, Xia Bin, a cabinet-rank minister, stated that China’s foreign reserves should be employed as a “bargaining chip” in trade talks with the U.S. That same year, as China and America hammered out a trade deal, He Fan, an official at the Chinese Academy of Social Sciences, went even further, warning that China could obliterate the greenback if it so desired. “China has accumulated a large sum of U.S. dollars. Such a big sum … contributes a great deal to maintaining the position of the dollar as a reserve currency,” he said. If China’s central bank is forced to dump its U.S. currency, it “might lead to a mass depreciation of the dollar,” he said. China’s state media describes China’s huge dollar holdings as a weapon. In the past, it has referred to America’s debt pile as China’s “nuclear option,” indicating Beijing could easily trigger a dollar meltdown of massive proportions if it needed to.

America faces some tough choices. Watch to see how its massive debt leads to a weakness that will alienate its allies. America is about to lose a lot more influence within the Asia Pacific. Whether China drives Japan into submission, or causes Japan to seek military independence from Washington, America risks being effectively driven back to the beaches of Darwin and Pearl Harbor.

China has got its fingers on a global economic hand grenade, and things may be about to get ugly.