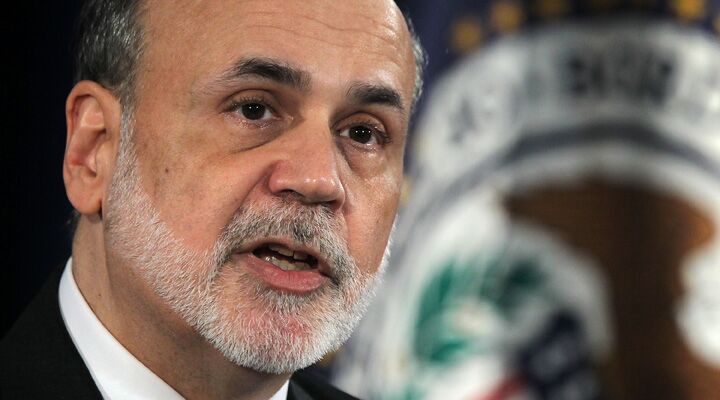 It is quantitative easing or death for America; so says our top banker.

Last Thursday, Federal Reserve Chairman Ben Bernanke confirmed the worst: The economy is heading into the toilet. America’s job engine is stalled. Debt loads are unsustainable. Consumers are tapped out. The big banks are insolvent. The private sector can no longer support the public sector. And oh, the government is broke.

Okay, he didn’t say those exact words—markets would have collapsed if he told the truth—but his actions indicated how he really felt.

His official announcement said the economy is on the mend, it is just experiencing a few headwinds from Europe, and the Fed just wants to help create jobs a little quicker. He then went on to unleash a quantitative easing program (QE3) so potentially massive in scope that it could dwarf QE1, QE2, Operation Twist, and all the money-printing schemes the Fed has carried out so far combined!

If you really want to know what is going on in the economy, ignore what the Fed says and watch what it does.

So what is the Fed doing? Bernanke’s announcement says the Fed will now spend a whopping $40 billion per month—$480 billion per year—purchasing mortgage-backed securities from the big Wall Street banks.

He says this is an effort to push down mortgage rates and get more people buying and building houses, and thus create jobs. If this is the best the Fed has to offer, America is in big trouble. Mortgage rates are already at historic lows, and people are not buying houses. Pushing record low rates a few fractions of a percent lower won’t do much. What is more likely to happen is that the big banks will finally have an opportunity to unload all their garbage subprime-mortgage-backed securities at the expense of taxpayers. This is probably the real unspoken motive.

But if that part of the Federal Reserve’s announcement wasn’t shocking enough, what it said next should blow your socks off. The Fed said it was writing itself a blank check for how much it could spend until the labor market improved “substantially.” It gave itself no predefined limit on how long, or on how much it could spend under this new QE3 program. It is completely open ended. It can go on forever.

The Fed also indicated that if this did not prove enough to stimulate the job market, there were other policy weapons the Fed could unveil. For starters, it will keep the interest rate it charges banks to borrow money at zero percent until at least 2015.

For those not versed in the intricacies of Federal Reserve machinations, remember that the Fed has no money of its own. Any money it spends, it does via a printing press, or its electronic equivalent, which it uses to create dollars out of thin air.

But there is no such thing as a free lunch. Economists always forget the other side of the equation. You don’t just create $40 billion, throw it at the banks, and get magical economic growth. The failure of QE1 and QE2 should have illustrated that by now. If creating growth was so easy, why stop at only $40 billion per month? Why not $400 billion?

The problem is that when the Fed “creates” money out of thin air, it cheapens the value of all preexisting dollars.

So while dollar money supply totals may grow by $40 billion per month, and while gross domestic product may increase, it is phony growth—because the dollars are worth less. Yes, people are spending more, but they are getting less.

Printing money to buy things is “Zimbabwe policy.” We all know what happened to Zimbabwe when it tried this. Eventually it cost Zimbabweans billions of dollars to buy a banana. This is where the QE road leads.

It is happening already. Within just a few hours of Bernanke’s statement, the dollar had lost over half a percent in value. On Friday it lost more than half a percent again.

In two days, the dollar lost more than a percent of its value. And that was due to just the announcement. The dollar printing has barely started.

The Federal Reserve’s QE policy will drive the dollar “through the floor,” says Peter Schiff, ceo of Euro Pacific Capital.

Schiff is absolutely right. When America’s central bank announces that it is going to create unlimited amounts of new money to fix the economy, you need to realize that America is in serious trouble.

The truth is that America is addicted to quantitative easing. It can no longer function without it. The federal government can’t cover its bills without money printing. The banking sector would collapse without money printing. The mortgage market would no longer function without various forms of quantitative easing. And now Bernanke says the job market may not recover without QE.

America needs to prepare for massive economic upheaval. America’s top banker has signaled that it is quantitative easing or sudden death for the economy. There is no choice. If the money printing stops, America stops. But that means the dollar is going to get killed. QE will destroy the dollar, and America’s standard of living.