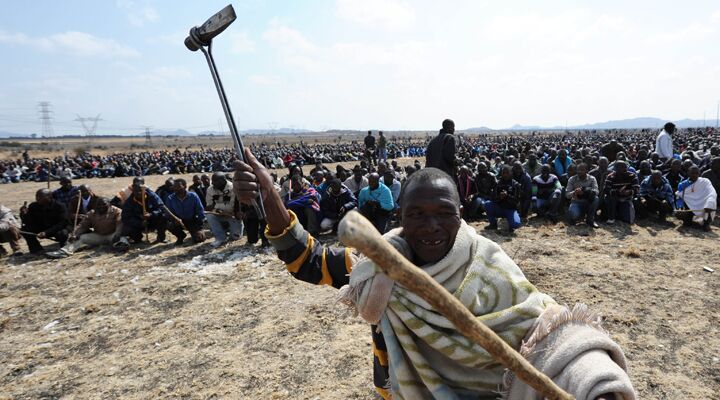 What the Lonmin platinum mine massacre portends for South Africa.

Africa’s best example of a functioning society exploded with violence on Thursday. Almost two decades after the end of apartheid, the world is waking up to the fact that Africa’s last hope is a ticking time bomb.

The footage of the massacre is disturbing: yelling, sporadic gun shots, and in the distance, smoke from grenades designed to disperse crowds. But then all of a sudden you can sense extra tension in the atmosphere. More shouting, and then a mass of men holding what appear to be metal spears and machetes charge out of the smoke. It is hard to tell who was first to pull the trigger, but within split seconds the air is filled with gunfire—and row after row of men are mowed to the ground.

That was the deadly culmination to Thursday’s mine worker strike at Lonmin’s Marikana platinum mine—and the above video didn’t even show the most graphic footage. Thirty-four are dead, almost 100 injured, and 259 arrested.

As the Guardian reported, had this massacre happened under the old apartheid regime, there would have been sustained furor around the world. As it is, the world just sees this recent violence as typical Africa. It’s just another case of incomprehensible black-on-black lawlessness and vicious violence.

It is very telling of the deteriorating state of the country today. South Africa never used to be that way.

Some people blame the trigger-happy police. A front-page editorial in the Sowetan newspaper wondered if anything had changed since the end of apartheid. “It has happened in this country before where the apartheid regime treated black people like objects,” the paper said. “It is continuing in a different guise now.”

South African President Jacob Zuma has ordered an official investigation into the police action. But it is hard to blame the police for shooting first and asking questions later. Just days earlier, mine workers had brutally hacked two police officers to death and burned two security guards alive.

Other people blame the unions. When the mine workers illegally went on strike, Lonmin tried to bring in other workers. Violence erupted. Eight miners from one union were killed by miners from a competing union.

“They can beat us, kill us, and kick and trample on us. We aren’t going back to work and they won’t be able to employ anyone,” said Makhosi Mbongane, a striking miner interviewed by Associated Press. “If they employ other people, they won’t be able to work either. We’ll stay and kill them. We are justified to ask for a higher salary.”

The reality is that South Africa’s wealth is about to be divvied up among the various power players. The union leaders, the populist politicians and the rich black elite are all jockeying over the post-apartheid jewels. The angry mine workers don’t know it, but they are just useful, but expendable, pawns.

Jacob Zuma in June made a big political point out of the fact that the country’s economy is still largely under the control of whites. The president said that “certain compromises” over the economy and ownership had been negotiated in 1994 in order to ensure a smooth transition from white to black rule at the end of apartheid. But now, according to Zuma, it’s time for a “second transition” to put the wealth balance in favor of the black majority.

Zuma said the current “willing buyer/willing seller” policy is too slow in transferring ownership and wealth from whites to blacks. More forceful steps need to be taken, he said, but did not specify details. Zuma did say that black empowerment policy must be strengthened.

South Africa’s various post-apartheid leaders have made it clear that South Africa’s wealth—whether that means farms, mining companies, banks, or other businesses—needs to be redistributed. And since the government doesn’t have the money to do it through a willing buyer/willing seller policy, it is signaling that white-owned businesses will eventually be taken from whites and given to blacks—just as happened in Zimbabwe.

The violence at the mines is a result of South Africa’s redistribution policy. What is really going on is a battle over who will own South Africa’s mines. Unions are battling over who will be bequeathed ownership in South Africa’s richest properties to fulfill Jacob Zuma’s black-ownership policy. But it won’t be individual mine workers—of that you can be sure. For them, nothing will change. They will just get new bosses. So social tension will grow.

But the signs that South Africa is a time bomb getting ready to explode are evident elsewhere too.

Many blacks point out the land ownership disparity. Whites still own an unfair amount of land, they say. So frustration grows with the slow pace of land redistribution. And the farmers are targeted in hate crimes.

On August 12, 70-year-old Owen Charles was stabbed to death on his farm. He was killed while celebrating his wife’s birthday. The attackers turned on her too before leaving. She was sent to the hospital in critical condition.

On August 13, in Ladybrand, near the border of Lesotho, farm manager Allen Rodgers was shot and attacked with machetes by three men. The men were waiting for him inside his house, with his terrified girlfriend tied up.

On August 14, Ronel van Eck was killed at the gate of her farm while taking her 9-year-old son to school. She was shot in the face, neck, arms and chest. The attackers have not been found.

It seems like there is a grisly farm attack every other day. But the media is growing desensitized.

Since the end of apartheid, over 3,000 white farmers have been murdered, according to Genocide Watch. This figure amounts to almost 7 percent of the total population of white farmers in South Africa. These figures make South African farming the most dangerous profession in the world.

Meanwhile, South African populist leaders like Julius Malema continue to stir up the masses. Speaking to thousands of miners after Thursday’s massacre, he was the first politician to personally address the crowds. He told the angry mourners that the police had “no right to shoot,” even if they had been fired upon first. He then blamed Jacob Zuma for not acting fast enough to nationalize white-owned property. He encouraged the workers to continue the strike until their pay was doubled, and encouraged unions at other mines to join the strike.

Malema is famous for his renditions of “Kill the Boer and Bring Me My Machine Gun.” Jacob Zuma sings the songs the South African Supreme Court ruled as hate speech too.

Back on the farms, the South African government has passed laws banning farmers from arming themselves, and allowing the government to confiscate their weapons. Who would want to be a white farmer? Maybe that is the point.

But it is not just whites who are suffering in the new post-apartheid South Africa. As the recent mine killings demonstrated, it is the blacks too.

Mobs of gang members terrorize South Africa’s many slums. In places where the police fear to go, “necklacing” is the latest form of vigilante justice. So far this year, 10 people have had gasoline-filled car tires shoved over their shoulders and ignited—causing gruesome and terrible deaths. According to WND, this practice has been used to kill political opponents as well.

Imagine the outrage if these kind of murders happened in America—and then were broadcast to the world. They would make television headlines everywhere. But occurring in a continent known for its violence, few people care about how bad things have gotten in this former First World nation.

South Africa is a nation bubbling over with racial tension and swiftly proceeding down the road toward Zimbabwe-style meltdown. The reality, as Genocide Watch is warning South African farmers, is the country may soon be facing Rwanda-style genocide. If you live in South Africa, you need to read South Africa in Prophecy to understand where the Bible says your nation is heading. Read it now, before it is too late.