Major drought was largely responsible for the downfall of ancient Rome. Is drought about to bring down another once-impressive civilization? 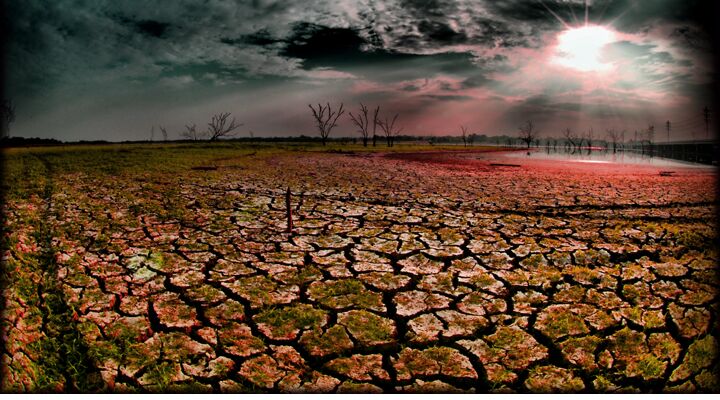 Major drought was largely responsible for the downfall of ancient Rome. Is drought about to bring down another once-impressive civilization?

A historic, unrelenting drought is slowly, painfully, tightening its grip on the United States. Many people are feeling the effects—but too few realize how desperate the situation really is. But have you contemplated what this epic event means, not just for America, but for the world?

To people in wealthier nations, drought simply means hot weather, parched lawns and plants, and perhaps a higher-than-normal electric bill. A lack of rain is an annoyance. It’s like an itch, uncomfortable and irritating, but easily mitigated. Few consider drought to be catastrophic, even fatal.

But severe, prolonged drought, the kind that seems to be confronting America, is catastrophic—as catastrophic as financial and political meltdown, or mass social unrest and violence, or even large-scale war that kills tens of thousands. In fact, under the right conditions, a lack of rain can actually cause all these things.

The Roman Empire dominated human affairs from the first through the fifth centuries. At the time, there was no greater, more politically, militarily or technically advanced civilization on Earth. Rome’s territory included all land adjacent to the Mediterranean Sea, including North Africa, a large cut of the Middle East, all of Europe, and half of the British Isles.

But this all changed in the fourth and fifth centuries. Why? In part, because a severe, prolonged drought wreaked havoc on the city of Rome, thrusting the economy and politics of the capital into instability and chaos, and eventually causing the mighty empire to crumble!

The Romans weren’t nearly as ignorant as we are today about the impact of drought. There was a time when people understood that drought meant extreme hardship, suffering and, if it persisted, death. People understood that without rain, crops, fruit trees and pastures died, lakes and watering holes dried up, livestock starved. In the past, when a drought set in, farmers and their families, and even entire towns and cities, recognized early that they had two options: relocate or starve.

Although we’re in the 21st century, this reality has not changed. Except that unlike yesteryear, people today are ignorant to the fact that extreme drought kills.

Our ignorance stems largely from the fact that very few of us actually grow our own food. These days, cultivating food means strolling through the local, air-conditioned Walmart munching on free food samples while filling an oversize cart with all sorts of bright, colorful, plastic containers. Our food, in its journey from garden to gut, passes through an extensive network of tractors, conveyer belts, factories, blenders, chemical additives, trucks and stores. It’s prepared, processed and packaged, tied, dyed and fried, and in some cases, even buffed and waxed.

For many, this detachment has severed the connection between food production and nature.

But alas! Even in 2012, our food, at least the kind worth eating, still comes from the ground—and it still needs rain.

It’s true that the effects of drought have been mitigated by the use of wells and sophisticated irrigation systems, by globalizing the responsibility of food production, and by the creation of genetically modified, drought-tolerant seeds. But if the drought is extreme, or persists, such measures fall short. It’s like shooting a bear with too small of a gun: We can slow it down, create time and perhaps temporarily alleviate our fears. But in the end, the inevitable effects of drought will devour us.

And devouring us it is.

The present drought is America’s worst in more than half a century. Some are comparing conditions to the Dust Bowl conditions of the 1930s. It’s been described as a full-scale catastrophe, a “natural disaster of epic proportions.” By the end of June, more than 50 percent of the U.S. was experiencing moderate to extreme drought. The beginning of July brought no relief, and the plight has only intensified. According to the National Oceanic and Atmospheric Administration, this summer, 80 percent of the U.S. has been abnormally dry.

By mid-July, with summer only half over, the U.S. Department of Agriculture (usda) had already declared more than 1,000 counties in 26 states natural-disaster areas due to drought conditions.

The impact is dramatic and far-reaching. Across America, farmers are slaughtering livestock because there’s not enough pasture, and feed is far too expensive. This may mean lower beef prices in the short term. In the long term, it means most of us will be eating more artificially fed, hormone-filled chicken. On July 20, the usda reported that America’s cattle inventory was the smallest since the agency began a July count in 1973. In other words, America has as many cows today as it did nearly 40 years ago. Meanwhile, its population has shot up by nearly 100 million people.

The same goes for the price of food and the many household items that contain corn, soybeans and wheat. It’s shocking how many items today—from soda to baby food, peanut butter to powdered sugar, talcum to toothpaste—contain corn in some form. It’s the same with wheat and soybeans. In July, according to the United States Drought Monitor, almost 90 percent of America’s corn and soybean crops had been damaged or destroyed as a result of the drought. The result? The price of corn jumped 50 percent in a month, while soybeans hit record prices too. The price of wheat, another critical staple, increased 50 percent in five weeks.

It’s not hard to see how this will drive up food prices, which would most likely further undermine the economy. In fact, one economist believes the drought will knock 0.5 percent off the U.S. gross domestic product this year.

But think beyond the rising cost of food. What happens if the drought continues to worsen, or even continues into next year, or even the year after?

Consider too that America is responsible for growing half of the world’s corn, and is the world’s largest exporter of soybeans and wheat. Reuters reported in July that “the soaring prices in the United States—the world’s largest exporter of corn, soybeans and wheat—has rattled food markets worldwide on fears that food inflation will be imported, food aid or supplies for hungry nations from China to Egypt will not be available, and food riots could occur as in the past.”

The price of corn, wheat and soybeans has already surpassed levels reached during the drought of 2007/08, when rocketing food prices sparked riots in more than 30 countries.

Can you begin to grasp the magnitude of this crisis? In this globalized, interconnected world, persistent, widespread drought in a critical region—such as America’s breadbasket—doesn’t just mean agricultural disaster. It can mean financial and economic malaise, political and social chaos, even large-scale violence and wars.

Can other countries pick up the slack? Perhaps some. But it hasn’t stopped raining in much of Russia’s wheat-growing region in recent weeks. The same goes for Brazil. Australia produces an enormous volume of wheat, but it too is experiencing abnormal weather.

Major floods and droughts, reduced yields and increased demand all converging at the same moment—it would be the perfect storm!

History shows many examples of drought and its side effects wiping out economies, sparking unrest, upending governments, setting off wars—and killing untold numbers of people.

This may sound fanciful. But to think such history cannot be repeated is shortsighted. While science has revolutionized agricultural production, it hasn’t come close to enabling mankind to produce food without water. And until it does, we’ll all be at the mercy of extreme, sustained drought!

So, what is the solution? How can you escape the drought?

Should we follow the example of Tom Vilsack, the U.S. secretary of agriculture, who told President Obama in July that he gets down on his knees every day and prays for rain?That would be an admirable start. Of course, it would be pointless if you didn’t sincerely believe in God. Therefore, the process begins with a person acquiring the humility and intellectual objectivity to prove the existence of God and that the Bible is the truth of God. Then, with your belief in God firm and your faith in the Bible secure, one would only have to study God’s Word to see how to avoid drought and other natural disasters.

Where would you begin such a study? A good place to start might be Leviticus 26, a chapter that explicitly instructs us how to receive the blessing of regular rain, followed by abundant crops and overflowing pantries.

Notice God’s instruction here: “If ye walk in my statutes, and keep my commandments, and do them; Then I will give you rain in due season, and the land shall yield her increase, and the trees of the field shall yield their fruit. And your threshing shall reach unto the vintage, and the vintage shall reach unto the sowing time: and ye shall eat your bread to the full …” (verses 3-5).

God lays it out so simply: Obey me, and I’ll make sure you never suffer drought, or any other natural disaster!

Now notice what He says will happen as a result of disobedience to His law. Same chapter: “And if ye shall despise my statutes, or if your soul abhor my judgments, so that ye will not do all my commandments, but that ye break my covenant … I will break the pride of your power; and I will make your heaven as iron, and your earth as brass: And your strength shall be spent in vain: for your land shall not yield her increase, neither shall the trees of the land yield their fruits” (verses 15-20).

Again, God is explicit: Break my laws, and I will send drought so bad it will seem like the sky is one giant sheet of iron!

Leviticus 26, in addition to a host of other scriptures, reveals the ultimate solution to drought and other natural disasters: Repent, and obey God’s law!

Of course, that’s not about to happen—at least, not before these curses grow far more severe. Today’s society is so far removed from God that many will find that statement—let alone the thought of personal obedience to law—laughable. But this instruction applies on an individual level too. God promises those who submit to Him, who actively seek to obey His laws, in letter and spirit, that He will give them peace and security—including physical protection and sustenance.

It’s easy to tell you to repent, to love God’s law and start obeying it. But in order for you to do that, you must first be educated in God’s view of repentance. You see, repentance is the most difficult task a human being can pursue. Most people do not understand that it is infinitely more than simply being sorry, or experiencing shame or regret. Godly repentance is a spiritual and moral transformation, a psychological overhaul. It requires humility, selflessness, and an open, objective mind.

Most importantly, it requires a power that is beyond our capacity to produce.

Only God can empower you to achieve the repentance, and the level of obedience, that He seeks (Romans 2:4). The question is, are you prepared to ask God to give you this power, to meet the criteria He requires in order for Him to give it to you, and to then wholeheartedly commit yourself to this challenging, yet most exhilarating and exciting, life-altering experience?

If you are, then request now our free booklet Repentance Toward God.