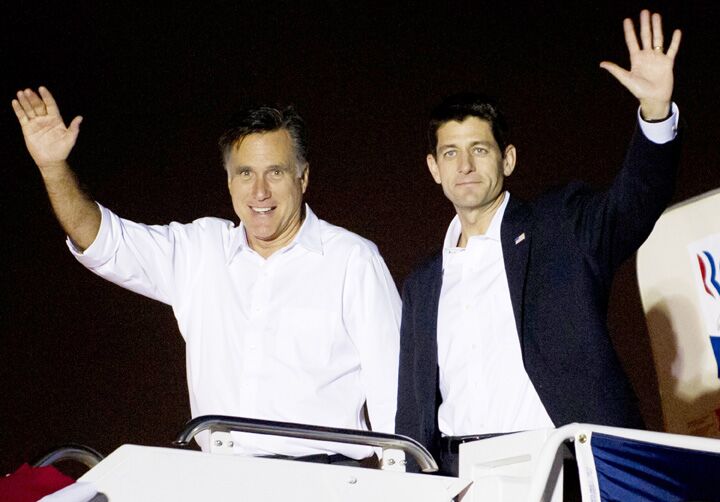 Regardless of who wins the election, America faces some tough decisions.

Mitt Romney, on Saturday, officially chose Wisconsin congressman Paul Ryan to be his running mate. Some analysts called it a “bold move” that energized conservatives.

How important is this decision to America’s future? It suggests Mr. Romney is putting a high priority on correcting the nation’s debt-burdened economy.

Here’s a more fundamental question: How much difference will it make who America elects in November? Many people believe it is a choice between fiscal sustainability and economic collapse. But regardless of what Democrats or Republicans say, let’s look at some realities about America’s economy that the next president, whoever he may be, is going to have to face.

Challenge 1: Can you conceptualize $1 trillion?

Think about how much a trillion is, and realize that America is going further into debt by more than $1 trillion per year. America’s total yearly budget is only $3.7 trillion. So more than a quarter of our total spending per year is borrowed—which means if we are to balance our budget, almost a quarter of America’s budget will need to be cut.

And most of the budget balancing will probably need to be done by cutting because there simply is not enough left to tax. According to Global Economic Trend Analysis’s Mike Shedlock, even if America took 100 percent of every corporation in America, plus confiscated every single asset of the super-wealthy (like Warren Buffet and Bill Gates), we still wouldn’t even get close to balancing the budget. We would still have to “take the combined salaries of all players in the nfl, Major League Baseball, the nba and the nhl, cut military spending by $254 billion, and tax everything people make above $250,000 at a 100 percent tax rate,” Shedlock says.

But America’s days of borrowing and spending are coming to an end.

Of the $1 trillion America borrowed last year, around half of it was money that was created out of thin air by the Federal Reserve. The Fed was forced to create the money because foreigners would not lend it to America at interest rates we want.

Whether America’s next president decides to cut spending or increase taxes, both are virtual death sentences for an economy that is probably in recession again.

As huge as America’s deficit is, the bigger threat may be America’s practically unfathomable debt. America’s official federal debt is almost $16 trillion—but that is only the tip of the iceberg. America has promised its citizens tens of trillions more in Social Security, Medicare and Medicaid benefits. Total it all up and Prof. Laurence Kotlikoff puts America’s total liabilities at a mind-boggling $222 trillion. Go back and reconceptualize a trillion.

Not all of this money is due at once, but increasing portions will be as America’s 80 million baby boomers retire. There is not a chance that America can pay this bill.

But perhaps the most imminently dangerous part about America’s debt is refinancing risk. America is constantly borrowing money to pay back money that is coming due. Right now it is not having too much trouble borrowing because Europe appears to be in worse shape. When Europe eventually gets its act together, America may not find as many willing lenders—it may face its own Greece moment!

And then there are all the welfare-type programs supplied at the local city and county levels.

The total price tag for just federal and state welfare came to almost $1 trillion in 2011, according to the conservative Heritage Foundation. So almost a third of America’s yearly budget now goes to welfare programs.

And if nothing is done, the share of welfare spending in the federal budget is set to dramatically increase. Under the current 10-year budget, federal welfare spending alone will total $1.57 trillion by 2022.

There is no easy fix. Politicians can cut spending—but not without massively damaging the economy. About one in three Americans get some sort of government handout. The economy is addicted to government spending. There are whole industries that cater to welfare dependence. Go cold turkey, and expect massive economic, if not social, upheaval.

On Friday, Reuters revealed that U.S. regulators had told U.S. banks to make plans for preventing collapse. The directions were given to America’s five biggest banks, including Bank of America and Citigroup, and emphasized that the banks could no longer count on government support. Regulators said the banks needed to consider radical measures to prevent failure in times of distress, and that they had to be executable within three to six months. Five years following the 2008 Wall Street meltdown, the banking system is still no more secure.

Yet, because America’s economy is debt-based and consumption-driven, if regulators try to reign in the big banks, the economy is sure to slow even further and jobs will be lost.

Challenge 5: The jobs are gone forever.

America is experiencing the worst-ever post-recession job recovery. At the current pace of job growth, America is still around two and a half to three years away from just getting the jobs back that we lost in the 2007 recession. And then we still have to find more jobs for all the people who have entered the workforce over the ensuing eight years.

The truth is that regardless of what either presidential candidate would do, the jobs are not coming back—because they were fake jobs in the first place. The housing bubble was a product of politicians forcing big banks to give loans to unqualified buyers and the Federal Reserve trying to goose the economy by artificially lowering interest rates. The result was a ballooning money supply that flowed into real estate—and all those builder, agent, appraiser and banker jobs.

Meanwhile, the effects of the housing bubble masked the greatest period of industrial and manufacturing outsourcing in U.S. history. Due to a combination of high labor costs, high taxation, high regulatory burden, high environmental compliance costs, advancing technology, and the new global economy, many U.S. jobs are now filled overseas and the associated products and services imported.

For the first time in history, American students owe more in student loans than the country owes in credit card debt. Yet what do students get for that? Increasingly, it is a lifetime of indentured servitude at a job that barely pays the interest on their loans.

This is a huge problem, because many of these students will become economically nonfunctional—trapped in jobs paying the bills, instead of out creating jobs and building the economy.

Government policy that encourages everyone to go to college, and borrow money to do it, has driven up tuition so high that in many cases it no longer pays to even get a degree. To top it off, due to schools trying to increase enrollment, course work is dumbed down and grades are inflated.

Fifty years ago, the majority of Americans went to bed with their doors unlocked. They left their keys in the car in case someone needed to borrow it. They never thought twice about letting their children walk to school.

We don’t live in that America anymore.

Think about how much more wealthy America would be if people just practiced the principles as outlined by the Ten Commandments. If there was no more lying, stealing, coveting and murdering.

Regardless of who America chooses at the ballot box, its moral slide will not be turned. At best, it can be slowed. There are 230-plus years of U.S. history that prove it.

America’s debt, its welfare mentality, its crumbling education system and morals are all the product of America’s collective choices. We are now eating the fruit of those choices. Economic indicators suggest another economic downturn has already started. A greater economic depression is on the way, and there is little that can be done to mitigate it.

America is past the point of no return. America’s past prosperity will not return until the whole economic system has been wiped out. Tough times are coming on America, but once through, the country will be able to start anew.