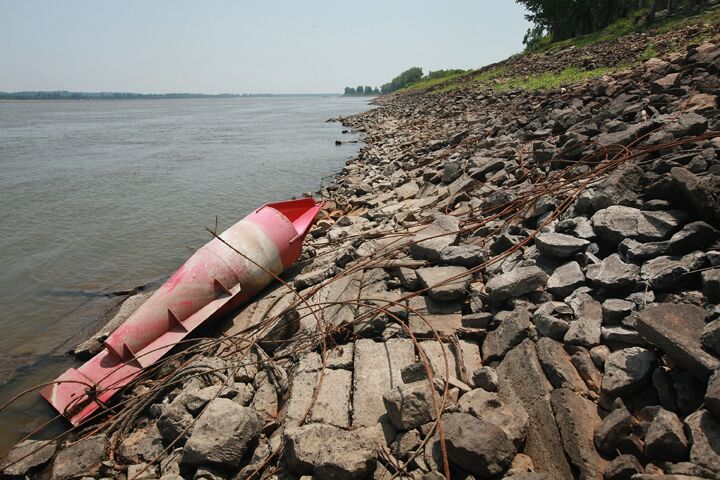 If the world’s largest navigable river system goes dry, the economic consequences will be felt around the world.

What is the single greatest reason America is so wealthy? According to the analysts at Stratfor, it is because of a river.

They have to be joking, right?

What about America’s vast gold resources? What about its mountains of coal? America is the world’s third-largest oil producer—surely that is why. Then there is America’s temperate climate and fertile soils that traditionally make it the world’s breadbasket. And don’t forget America’s human capital, Yankee ingenuity, and Protestant work ethic. Surely these factors are cumulatively more important than a river.

Not according to one of America’s premier think tanks. Many countries have large natural resources and hospitable climates, but don’t even come close to having America’s wealth. What sets America apart from the rest of the world is the Mississippi River basin. It is what makes exploiting America’s resources economically possible.

But now, due to the worst drought since the 1950s, the Mississippi may be about to go dry.

In Memphis and Vicksburg, the shrinking river is obvious: slower river, exposed river banks, and more sandbars. The water is down more than 13 and 20 feet in each city respectively. The Mississippi on average is about 13 feet below normal—and a whopping 55 feet below where it was at this time last year. On some stretches, the water level is perilously low. On July 17 it was reported that a 100-mile stretch of the Platte River in Nebraska, had dried up.

In fact, water levels are now so low that barge operators are no longer able to operate at full capacity and have to shed both weight and number of towed barges.

For each one-inch loss of water, the standard barge must unload 17 tons of cargo—that is a loss of 204 tons, per barge, for every one-foot loss. A typical tow on the upper Mississippi river may have 15 barges. A one-foot loss of water translates into a loss of 3,000 tons of capacity. Tows on the lower Mississippi River may have up to 45 barges, resulting in a loss of capacity of over 9,000 tons. It would take almost 600 semitrucks to haul the freight unloaded by one large barge grouping under those conditions! There are thousands and thousands of barge strings that ply the Mississippi each year. The shutdown of the Mississippi would be an absolute catastrophe!

Already, the cost to ship bulk goods is rising. As the weight that can be put on barges shrinks, the cost per unit weight is rising. And that translates into higher costs on the consumers’ end. Products that are already only marginally profitable may not be economic at these higher transport costs.

The last time the Mississippi shut down due to low water was in 1988. Then just a small section of the river became unnavigable—but it cost the shipping industry $1 billion.

If the Mississippi shut down today, sources quoted by nbc estimate that the direct costs to the economy would be a massive $300 million per day—a cost that would skyrocket exponentially if the river did not reopen after more than a few days!

We are still a few feet of water away from that, but the summer isn’t over either.

1988 is the only time in recent memory that can compare with this summer, says Lynn Muench, senior vice president of American Waterways Operators. “For the last two or three weeks, the phrase I keep hearing is, ‘Close to 1988. Worse than 1988. Same as 1988,’” she says. “There’s a real possibility that it’ll be worse this year.”

Making matters worse for barge traffic, last year’s record flood stirred up debris and changed the location of underwater obstructions. The Army Corps of Engineers is working like crazy to dredge shallow areas and mark dangers.

But still, the number of barges going aground is rising. Shipping lanes are narrowing. And traffic is slowing. On Tuesday, a barge grounded in Minnesota. It took 24 hours to clear it, and another day to dredge the channel before other barge-trains could pass. The same day, another barge got stuck in La Crosse, Wisconsin. It took about a day to get traffic moving there again. cbs News says barge traffic is getting hung up all up and down the Mississippi, even in areas that normally don’t have any problem.

America’s Mississippi River system is an absolute jewel that America cannot afford to lose—no matter how short the duration.

The Mississippi River, in conjunction with Missouri, Red, Arkansas and Ohio rivers, comprises the largest interconnected network of navigable rivers in the world. Stratfor calls the Greater Mississippi river network “the circulatory system of the Midwest.” It is what opens up one third of America to the world. Even without the addition of canals, it is possible for products from anywhere in the world to reach nearly any part of the Midwest. With the addition of canals, goods can now be transported from the Great Lakes in the north to New Orleans in the south.

And this fantastic water highway just happens to sit astride the most fertile crop-growing region in the world.

It is hard to overstate the economic implications of this overlap. The geography of most nations requires their governments to devote scarce resources to lay endless rail and road to build the transport capacity that was gifted to America at no expense. And water transport costs a fraction of moving goods by road and rail.

The Mississippi River network virtually guaranteed that America would be rich.

But the Mississippi blessing may now be turning into a curse. Everybody is aware that America is in the midst of an epic drought. Contingency plans are being made for reduced corn, soybean and wheat crops. America has experienced droughts before. Markets are prepared for this reality, although they may be underestimating the global consequences of the drought.

America is now critically reliant upon the uninterrupted functioning of this vast intercontinental transport network. The drying up of the Mississippi—even for as short a period as a week—would be a huge, unexpected blow to this nation, never mind the global economy. And it is one that America and the world can ill afford at this time.