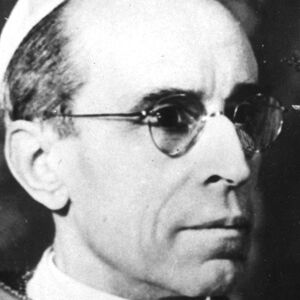 After years of clashing with the Holocaust Museum about Hitler’s pope, the Vatican gains the upper hand.

Israel’s Holocaust History Museum at Yad Vashem was built to preserve and protect the largest collection of Holocaust documentation in the world. It contains over 100 million pages of evidence documenting the Holocaust.

This weekend, one of those documents is being re-written. After years of clashing with the Vatican over an unfavorable description of Pope Pius xii’s actions during the Holocaust, Yad Vashem has finally agreed to re-word the controversial display.

The previous sign for the display was titled “Pope Pius xii and the Holocaust” and read:

Pius xii’s reaction to the murder of the Jews during the Holocaust is a matter of controversy. In 1933, when he was secretary of the Vatican State, he was active in obtaining a Concordat with the German regime to preserve the church’s rights in Germany, even if this meant recognizing the Nazi racist regime. When he was elected pope in 1939, he shelved a letter against racism and anti-Semitism that his predecessor had prepared. Even when reports about the murder of Jews reached the Vatican, the pope did not protest either verbally or in writing.In December 1942, he abstained from signing the Allied declaration condemning the extermination of the Jews. When Jews were deported from Rome to Auschwitz, the pope did not intervene. The pope maintained his neutral position throughout the war, with the exception of appeals to the rulers of Hungary and Slovakia toward its end. His silence and the absence of guidelines obliged churchmen throughout Europe to decide on their own how to react.

This critical depiction of Pius has sparked a series of clashes between Yad Vashem and the Vatican in recent years. In October 2008, Vatican Cardinal Peter Gumpel said Pope Benedict xvi would not even consider visiting Israel until the display in Yad Vashem’s Holocaust Museum was removed.

Yad Vashem, at the time, refused to remove the wall text and insisted that it was based on the best research available. In response to Gumpel’s attack, a spokesman for the museum chided the Vatican for not opening its wartime archives to historians, saying, “Yad Vashem is certain that the opening of the Vatican archives on the relevant period would help further research on the subject.”

The Vatican later released a carefully selected portion of its archives and also distanced itself from Gumpel’s comments. A spokesman said the museum display would not be the “determining factor” in whether or not the pope would visit Israel. Finally, in early 2009, the pope agreed to visit Israel and deliver a speech at Yad Vashem.

Not long after the official visit was announced, however, controversy erupted again between Benedict and Yad Vashem, resulting in the pope publicly calling off his visit. He was angry about Yad Vashem’s continuous outspoken criticism of Pius’s silence regarding the Holocaust.

In the end, however, the pope decided to come to Israel and deliver his speech, though he pointedly avoided the section of the museum with the controversial inscription about Pope Pius xii. And during the speech, Benedict also stopped way short of the apology many Jews had hoped to hear from the German pontiff.

“There was no mention of the Germans or the Nazis who participated in the butchery, nor a word of regret,” said one Holocaust survivor after the pope’s speech in May 2009.

One member of the Knesset told Israeli radio, “I came as a Jew, hoping to hear an apology and a request for forgiveness from those who caused our tragedy, and among them, the Germans and the church. But to my sadness, I did not hear any such thing” (emphasis added throughout).

And now that the Vatican is winning the tug-of-war over the Pius xii wall text, that Knesset member might soon be unable to read about it at Yad Vashem!

“The new wall text still blames Pius xii for the fact that the church did not intervene on the Jews’ behalf at the time,” Haaretz reported July 1. “But it paints a more complex picture of his conduct and contains veiled criticism of the Vatican for refusing to open its archive to allow historians to scrutinize the actions of the Holy See during the war.”

The new text, while still somewhat critical, is much less specific. Even the title of the display now reads, “The Vatican and the Holocaust,” rather than “Pope Pius xii and the Holocaust.” The following paragraphs shift some of the blame to Pius’s predecessor. And while it still points out that Pius did not sign the Allied declaration condemning the extermination of Jews, it adds that Pius did give a sympathetic Christmas day speech in which he condemned the death of innocent persons.

The new wall sign still criticizes the lack of action on the Vatican’s part during the Holocaust, but it now allows for two different interpretations of history.

It reads, in part:

The pope’s critics claim that his decision to abstain from condemning the murder of the Jews by Nazi Germany constitutes a moral failure: The lack of clear guidance left room for many to collaborate with Nazi Germany, reassured by the thought that this did not contradict the church’s moral teachings.It also left the initiative to rescue Jews to individual clerics and laymen. His defenders maintain that this neutrality prevented harsher measures against the Vatican and the church’s institutions throughout Europe, thus enabling a considerable number of secret rescue activities to take place at different levels of the church.

The new text also dramatically differs from the old in that it references rescue activities that Pope Pius supposedly encouraged on behalf of the Jews. The Vatican has been campaigning for years to have this fictitious account added to history books. In 2008, for example, Pope Benedict xvi said of Pius and his behavior toward the Jews: “Wherever possible he spared no effort in intervening in their favor either directly or through instructions given to other individuals or to institutions of the Catholic Church.”

That statement represents a massive revision of history—and now that fiction is making its way onto the walls of the one museum on Earth that is supposed to be dedicated to accurately documenting the Holocaust.

Incidentally, when the story about the new wall text first broke at Haaretz.com, the headline read, “Under Pressure From Vatican, Yad Vashem Rewords Pius xii Wall Text.” An hour later, I noticed this not-so-subtle edit made to the headline: “Israel’s Yad Vashem Holocaust Memorial Softens Stance on Pius xii.”

The part about the Vatican pressuring Yad Vashem had been airbrushed out of the title. It’s yet another bit of critical history that has been carefully revised and re-written.