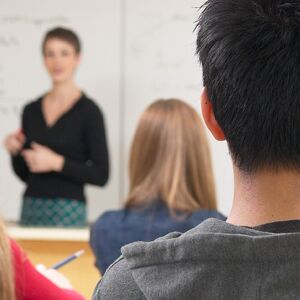 Let’s do the math. What happens when you remove the men?

My favorite teacher was Mr. Cobbledick—and he wasn’t even really my teacher. He was the grade 8 teacher when I was in grade 3. But Mr. Cobbledick was also the wrestling coach, and he let me be on the team even though few other schools had wrestlers in light enough weight categories to wrestle me. He let me “wrestle up” anyway. He was one tough teacher. When he spoke, kids listened. But he made wrestling so much fun that I wrestled all through elementary school and high school, and then during my university years I became a wrestling coach for children at a local club.

Many of my favorite elementary school teachers were men. I had many good female teachers too, but the ones who impacted me the most were the men who helped shape what I would become.

That really should not be a shock. Being male, I would and should naturally look up to, identify with, and imitate older males. What boy has not wanted to become like King David and slay giants, or like Gideon and heroically defeat a huge army? Or—be just like Dad?

What is a shock is that many students today go all the way through primary school without having one male teacher! Something doesn’t add up.

According to a 2009 report, more than a quarter of English children do not have even a single male teacher at their school. For many children, that means they have greatly reduced contact during the day with an adult man until age 11 when they go to secondary school. Children who don’t have a father in the home may not have any regular contact with a male role model until they go to secondary school.

The situation is similar in America, and Canada, and Australia—where between 70 to 75 percent of teachers are female.

Why is society robbing young boys of the masculine role models they need?

The lack of male leaders in schools is all the more hurtful considering the fact that most of the children going to school come from broken families or families that will one day experience divorce. America has more than 13 million single parents raising more than 21 million children. More than four out of five of those custodial parents are mothers.

That means more than 16.8 million children, boys and girls, don’t have a proper father figure to look up to at home—the foundation of education.

Many educators, especially feminist teachers, claim that a teacher’s gender makes no difference in how students learn. But even this claim is false.

According to a Swarthmore College study by Thomas S. Dee, published in the fall 2006 edition of Education Next, teacher gender does affect student grades. Dee claims that students taught by teachers of the opposite sex had test scores approximately 4 percent of a standard deviation lower.

When a teacher is female, Dee found that boys had a higher chance of being labeled as disruptive, whereas girls were less likely to be seen as troublemaking or inattentive. When the teacher was male, more girls reported that they did not look forward to certain subjects, or that they were afraid to ask questions. “Simply put, girls have better educational outcomes when taught by women and boys are better off when taught by men,” said Dee.

In the Bible, concerning education, God instructs, “And thou shalt teach them diligently unto thy children, and shalt talk of them when thou sittest in thine house, and when thou walkest by the way, and when thou liest down, and when thou risest up” (Deuteronomy 6:7). This continual teaching was to be conducted by both parents.

Why? Because children need both male and female role models.

God instructs both parents to be educators because children are “hardwired” to mimic both their parents—or, if they lack a parent, an older role model of the same sex. Whether you are a feminist teacher or not, you have to admit that children mimic the adults they are around. It is the way children work.

But remove same-sex role models—or worse, break up the family—and that biological hardwiring starts to short. Is it any wonder that so much crime is committed by males, that our prisons are filled with boys who come from broken homes? With no man around to teach boys to become real men, many boys remain boys—and worse.

A 2012 study conducted by the University of Connecticut found that fathers have the greatest impact on their child’s personality, even though mothers spend more time with them. “In our 50 years of research in every continent but Antarctica, we have found that nothing has as strong and consistent an effect on personality development as does being rejected by a parent—especially by a father—in childhood,” said Ronald Rohner, co-author of the study.

Rohner said that society tends to place too much emphasis on the impact of mothers. “We need to start giving greater acclaim to dads, and put them on an equal footing with moms in terms of their impact on children,” he said.

When children come from broken families, it is doubly important to have strong male role models for them at school.

In March 2008, the Telegraph published the results of a survey that should have infuriated people. The study highlighted, the Telegraph said, “the extent to which men have had to change within one or two generations.” It also revealed how emasculated British males have become.

Over half of the men polled thought that society was turning them into “waxed and coiffed metrosexuals.” Fifty-two percent said they had to live according to women’s rules. Men said they “felt handcuffed” by political correctness, and two thirds openly admitted they felt they could not speak freely and had to conceal their opinions. Four out of 10 men confessed to being frightened of heights and spiders, while a third admitted to being frightened of bossy women.

One of the biggest reasons society is filled with metrosexual, feminized men is because of the absence of masculine men for them to emulate. That is the answer you have to expect when you have an education system that often places boys, during their youngest, most impressionable, information-absorbing years, into an eight-hour-a-day environment that removes them from contact with even one man! And then sends many of them home to another environment void of masculine leadership. Zero male teachers, at home or school, equals zero future men.

The truth is, the lack of male teachers in primary schools is a direct attack against boys and masculinity. There is a conspiracy to de-masculinize boys. But the conspiracy goes far beyond the education system. The lack of male teachers is but one side effect of a giant problem that threatens to destroy the institution of marriage, family and, specifically, the role of the father. Read Conspiracy Against Fatherhood for the answer as to why educators seek to feminize boys, and to see who really is behind the conspiracy.