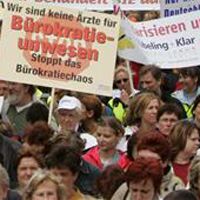 Everyone knows Europeans are fed up with Germany. The more pressing question is, what do the Germans think of their neighbors?

Europe is unraveling. Last weekend, events culminated to provide a glimpse of how Europeans view Germany’s salvation-via-austerity remedy for Europe’s debt crisis. Between the May Day protests, the widespread success of anti-EU political parties, the collapse of the Dutch government, and, most recently, the electoral success of anti-austerity socialist leaders in Greece and France, it’s obvious many in Europe are fed up with Germany, especially its demand for austerity.

But what about the Germans? What do they think of the virulent anti-German sentiment running through Europe?

More significantly, how will they respond?

Stop for a moment and think about this crisis from the perspective of the average German. Since 2008, his nation has been saddled with the unpopular, high-risk, hugely expensive task of rescuing Europe. The Germans didn’t ask for this. And they certainly aren’t responsible for the chaos. Neither the German government nor its people have taken on suffocating debt or spent profligately on frivolous comforts. The Germans don’t take long siestas, work six-hour days or pay themselves annual bonuses for simply turning up to work. To the contrary, the Germans have worked hard, saved their money and wisely lived within their means. Yet, Germany is expected to endure tremendous risk and make major sacrifices to rescue its neighbors. It’s already forked out tens of billions in bailouts, and is on the hook for tens of billions more. By the time it’s all said and done, Germany will cover more than one quarter of the total bailout.

For what? Germany’s European counterparts are thankless, frustrated, unrepentant—and in many cases, openly hostile.

Viewed from this perspective, one can understand why Germans are frustrated and resentful.

The troubling question is, where will the anger and resentment lead?

Just a few weeks ago, no mainstream German politician openly spoke about the possibility of Greece defaulting and exiting the eurozone. That has now changed. Following Sunday’s election in Greece, where anti-austerity, anti-German parties made huge gains, German hostility has boiled to the surface. On Monday, Klaus-Peter Willsch, the budgetary expert for Chancellor Angela Merkel’s Christian Democratic Union (cdu), stated that Brussels needs to “make Greece the offer to leave the eurozone in an orderly fashion, without leaving the European Union.”

Fellow cdu politician Michael Meister agreed, stating politely but decisively that although the EU does not want to cut Greece out of the eurozone, it is “clear that if the new Greek government … does not keep to the contracts, it will have to accept the consequences already announced.”

The disdain of the German public is less diplomatic. “Germans are now predominantly of the opinion that they would be better off if Greece left the eurozone,” said Carsten Hefeker, a professor of economics and an expert on the euro at the University of Siegen. “Nothing is in writing,” said Guntram B. Wolff, deputy director at Brussels research group Bruegel, “but people really are clearly and openly talking about” Greece leaving.

Sense the frustration and resentment.

Herribert Dieter, an analyst with the German Institute for International and Security Affairs, says preparations are already being made in Germany for Greece to default. “The mood in German government circles has become a little less enthusiastic, to put it mildly,” he stated. Dieter cited the example of Finance Minister Wolfgang Schäuble, who stated last Friday that membership in the EU “is not compulsory, it’s voluntary, and Greek society has a choice.” Schäuble’s remarks are a “good reflection of the changing mood of German policy makers,” stated Dieter.

“You can’t be a member of the club and disregard the rules,” he said. The Germans love rules and organization, structure and discipline—it’s one of their many admirable national traits. Problem is, the rest of Europe doesn’t have the same penchant for discipline and structure, at least not with finances. This is a recipe for confrontation, especially considering Germany has the political and economic might to air its frustration with meaningful actions.

Inside Germany, the media is grooming the nation for greater crisis. This week, the Frankfurter Allgemeine Zeitung warned: “The continuation of the austerity and reform programs is at risk. … What will happen if the new government [in Athens] actually demands new conditions or just plain rejects further economizing? … [I]f Athens decides to veer from the agreed upon course, then trouble lies ahead.” The conservative daily Die Welt employed more militaristic terms. “The election results are … a defeat for Germany. The Greeks and the French have rejected what they see as a German austerity and reform diktat. That is certainly unfair, given the massive obligations and risks that Germany took on to save the EU’s problem countries from bankruptcy. … In the end, the results are also proof that Europe doesn’t work.”

The Germans are tired of bailing out Europe and getting nothing but complaints and hostility in return.

Die Welt continued: “Every country still only debates within its own national borders, because there is no European public sphere. Germany’s joint liability for the precarious finances of the countries in crisis remains a one-way street because the Germans can’t manage to adequately assert their positions, interests or the significant efforts they’ve made.” There’s a justified yet highly dangerous tone of resentment in that last sentence. Germany wants European integration. But it’s realizing that the EU in its present constitution does not work.

“Whoever ends up governing Athens, it must be made unmistakably clear to the new leaders that they’re welcome to venture out on their own, but if they want to take advantage of the financial help from the donor countries and remain within the eurozone,then they must adhere to the stipulations already laid out” (ibid). In others words, Germany should not compromise substantially. “The German citizens are certainly not prepared to finance Greece’s vacation from reality,” warned Die Welt.

To the contrary, many Germans increasingly desire to give Greece a harsh lesson in reality!

Last month, historian and Stanford professor Victor Davis Hanson delivered a chilling warning about Europe’s debt crisis and its effect on Germany. “Historical pressures … are coming to the fore on the Continent,” he wrote. “The so-called ‘German problem’—the tendency of Germany quite naturally at some point to translate its innate dynamic economic prowess into political, cultural, and above all military superiority—did not vanish simply because a postmodern EU announced that it had transcended human nature …” (emphasis added throughout). In other words, the age-old “German problem” is still with us.

If you doubt this, he wrote, “just review current German and southern European newspapers, where commentary sounds more likely to belong in 1938 than in 2012.”

Davis Hanson continued: “The catastrophe of the EU has not been avoided by ad hoc bandaging—it is still on the near horizon. Now is the time to reassure Germany that a strong American-led nato eliminates any need for German rearmament, and that historical oddities (why is France nuclear, while a far stronger Germany is not?) are not odd at all. In short, as the EU unravels, and anti-Germany hysteria waxes among its debtors,while ancient German resentments build, it would be insane to abdicate the postwar transatlantic leadership we have provided for nearly 70 years.” He’s warning against underestimating Germany, or naively inviting Berlin to assume more power and leadership.

How concerned are you?

Understand. This is not a personal assault on the German people. As I’ve noted, one can easily identify with their frustration over their reckless, thankless neighbors. Nevertheless, their welling resentment is an alarming, deeply sobering trend. You’re human; you know where resentment and anger ends. It culminates in rash, emotional decisions, in fractured, contemptuous relationships, and, often, in violence and conflict. And when it comes to Germany, history reveals a unique tendency for deep-seated national resentment to end in intense conflict.

The more intense the resentment among Germans toward their European counterparts, the more they’ll condone Germany getting tougher and stricter with Europe.

The more upset the Germans grow with Europe’s dissension, the likelier they are to demand a strong, decisive leader to whip the Continent into line.

Watch closely, and remember. It’s not the anger and resentment of the Greeks or French or Portuguese that ought to overly concern us. The nation we need to be most concerned about—and watching constantly with a critical eye—is Germany. Together, history and Bible prophecy warn that there is nothing more frightening than a German nation experiencing the convergence of deep-seated national resentment and unchecked political, financial and military power.

And Germany today has both, in excess.