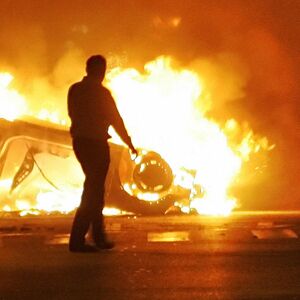 Will it happen again?

Twenty years ago this Sunday, riots erupted across South Central Los Angeles after a mostly white jury acquitted four police officers—three of them white—of the beating of an African-American motorist. The controversial verdict sparked one of the deadliest outbreaks of race rioting in U.S. history. Fifty-three people were killed and at least 3,000 more were injured.

During the six days of mob violence, the most frightening scene caught on tape happened at the intersection of Florence and Normandie. With news helicopters hovering above to broadcast the tragedy in real time, a mostly black mob yanked a white truck driver out of his cab and then mercilessly pounded the man into a state of unconscious submission—causing multiple skull fractures and severe brain damage.

This was Los Angeles—one of the most celebrated cities of America. And it had suddenly morphed into a lawless Third World city, controlled by murderous street gangs and looted by poverty-stricken locals.

VH1 is re-telling this tragic history next week in a documentary titled Uprising: Hip Hop & the L.A. Riots. According to the synopsis, the movie “documents how hip hop forecasted—and some say ignited—the worst civil unrest of the 20th century” (emphasis added throughout). Numerous Angelenos who participated in the violence and looting are interviewed in the film. And according to the Huffington Post, “almost no one” is remorseful for helping set off a firestorm that resulted in the deaths of 53 human beings.

“Instead, people demonstrate a palpable sense of pride in being part of something so historic,” the Post writes.

Twenty years on—and nothing much in the way of positive change. And given the current national climate of racial animosity surrounding the Trayvon Martin case in Florida, it’s hard to see how this documentary will help to bridge the divide between white and black America.

Of course, if you’ve followed the Trumpet over the years, you are well familiar with what the Bible prophesies about race wars coming to the streets of our biggest cities. As we wrote back in 1992, Los Angeles was only the beginning.

“These strong emotions will lead to more riots; more U.S. cities are going to burn! … As the economy grows worse, the rioters are going to burn more and more because God’s wrath is upon us!” (Trumpet, June 1992).

Today the American economy is teetering on the brink of collapse. The flames of racial hatred have only intensified. And America’s leaders are pouring fuel on the fire.

The administration currently occupying the White House was widely touted as one that would heal the breach between races. It was billed as a uniter, not a divider. These high hopes, however, were dashed early on in Mr. Obama’s presidency.

As my father correctly predicted on June 12, 2008, “[T]he race card is going to be played often for political gain! … This dangerous buildup within our society is a racist bomb that most of us will see explode in our faces!”

It’s simply not in the nature of man to guide and direct his own steps, as it says in Jeremiah 10:23. Apart from God, we are utterly incapable of solving our worsening problems—especially ones as intractable as racial division and strife.

And making matters much worse, Satan the devil is an absolute master at exploiting this kind of emotionally charged discord. The Bible describes the devil as the prince of the power of the air in Ephesians 2:2. He is identified as the god of this world in 2 Corinthians 4:4. It is Satan who surcharges the air with his rebellious spirit of lawlessness, anger and violence.

One of the black men responsible for nearly beating that white truck driver to death was a 27-year-old former Marine. He had a wife and children. He was gainfully employed. And he came from a good family—his father having been a prominent community leader.

Yet, despite this relatively noble upbringing, when the Rodney King verdict was announced—after seeing his community take to the streets in violent protest—he joined the mob without hesitation.

In a recent interview, he said, “You know, honestly, it was something that just happened, man. I never even knew Reginald Denny. Just the anger and the rage just took hold to where I nor anyone who was out there that day was in their right frame of mind.”

It just happened. The spirit of anger and rage just grabbed hold of them, and it resulted in the tragic deaths of 53 fellow Americans.

That same spirit of hatred and violence is about to explode on America’s streets once again! And it’s not just African-American rage that is boiling over. As Victor Davis Hanson recently noted, “To read comments following these stories on the Internet [about Trayvon Martin] is to enter the world of white counter-rage at a level I have never seen. We talk of black accusations of racism, but they are earning a counter-response that is equally scary, with some irate and others wearied to the point of quietism and isolation.”

The whole body is sick, as God prophesied in Isaiah 1:5-6. Notice verse 6 in particular: “From the sole of the foot even unto the head there is no soundness in it; but wounds, and bruises, and putrifying sores: they have not been closed, neither bound up, neither mollified with ointment.”

The wounds have not been healed or bound up. Twenty years after the infamous Los Angeles riots, there’s still plenty of hatred and numerous grievances and perceived injustices to go around.

And there are multiple triggers set to go off.

Verse 7 says, “Your country is desolate, your cities are burned with fire: your land, strangers devour it in your presence, and it is desolate, as overthrown by strangers.” Because of our many national sins, because of division and strife between the races, because of the weakness of our national leaders, America’s large cities will burn and become desolate!

“The seeds of this future calamity have already been sown,” my father wrote 10 years ago in Ezekiel—The End-Time Prophet. “The government has lost control. There is a breakdown of law and order. … We are getting dangerously close to social anarchy and chaos!”

We are now in the early stages of this society-wide plague of violence and burning. Los Angeles in 1992 was a chilling preview of what will soon spread to every major city in America—so says the Prophet Isaiah!

Thank God that these unimaginable events lead directly to the return of Jesus Christ and the establishment of God’s family government on Earth.