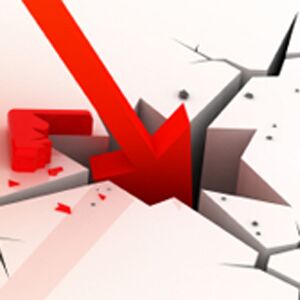 A massive bubble is inflating, and when it pops, the world will need a whole new economic system.

There is a new and dangerous bubble hanging over the economy. It is far bigger than the dot-com bubble. It absolutely dwarfs the housing bubble. And it is far more dangerous than the debt bubble that ignited the Great Depression.

This bubble will blow the 2008-2009 crisis out of the water, economist Peter Schiff recently said. Schiff is famous for correctly predicting the housing bubble.

But unlike houses, or Internet stocks, this bubble is less obvious at first—even if the dangers are much more dramatic. Millions of Americans are unknowingly living it each day.

But know this: Standards of living are soon going to change all across America—and for the worse.

Analyst Marc Faber agrees that life in America is about to massively change. Known as Dr. Doom for his pessimistic outlook for the country, his latest forecast warned that it is inevitable that “somewhere down the line we will have massive wealth destruction that usually happens either through very high inflation or through social unrest or through war or credit market collapse.”

“Maybe all of it will happen.” Faber got the housing bubble right too.

What is this looming bubble that so worries sane market observers? Here is a hint. The Wall Street Journal recently reported that the Federal Reserve “purchased a stunning 61 percent of the total net treasury issuance” in 2011.

What this means is that 61 percent of the money the federal government “borrowed” to cover its spending did not come from citizens, big banks, or even our Chinese and Japanese creditors. It was money that did not even exist prior to the government spending it.

This is a huge, startling, and ominous development. The government needed money, so the Federal Reserve simply created it out of thin air and debited government bank accounts. Without this conjured money, the government can’t pay its bills. If you or I did what the Federal Reserve is doing, it would be called counterfeiting and we would be thrown in jail. The Fed does it and it is simply called “quantitative easing.” Either way, it is a form of stealing.

But it is actually worse than that.

According to the Journal, the Federal Reserve isn’t just subsidizing U.S. government borrowing and spending, but it is more dangerously masking the “rapidly widening gap between [the] Treasury’s need to borrow and a more limited willingness among market participants to supply [the] Treasury with credit.”

In 2008, foreign nations lent America the equivalent of 6 percent of America’s gross domestic product. That number plunged to 1.9 percent in 2011. Similarly, private sector lending to America has fallen from 6 percent to 0.9 percent.

It is no wonder that at the end of March, leaders from Brazil, Russia, India, China and South Africa announced plans to create a brics bank to compete with the International Monetary Fund and World Bank. These nations account for approximately 30 percent of the global economy. The purpose of the bank is to facilitate trade between the five nations in their own currencies, as opposed to the U.S. dollar. It is a step toward breaking their dependence on the dollar.

Perhaps this is why Federal Reserve Chairman Ben Bernanke has refused to rule out more money printing even though he says the economy is out of recession. If the Fed were to stop printing money to “lend” to the government, the government might not be able to find enough willing lenders, at anywhere near acceptable borrowing costs, to finance its deficits.

The Fed is worried that if it stops printing money, the treasury market will melt down. If America can’t find enough lenders, interest rates will skyrocket. And the economy will seize up. If rates just return to the 5 percent range (as they were in 2007), almost half of all the money the government collects in taxes would go to paying just interest on the debt. Nobody even contemplates what will happen if rates return to the levels seen during the 1980s—because total financial meltdown would occur before they even got there. But interest rates have been there before—so what is stopping them from returning again?

This is what Schiff and Faber are worried about: The explosion of the biggest bubble in the history of the world—the U.S. government debt bubble.

And the resulting end of the financial system as we know it.

Consider America’s situation. It has never been more dependent on financial markets to pay its bills. Yet lenders are coming up short.

Since the 2008 crisis, America’s national debt has increased by $5.6 trillion. To put that into context, according to analyst Jim Quinn, it took all the years from 1789 until 2000 to accumulate the first $5.6 trillion of government debt.

Prior to the crisis, America’s yearly deficits never exceeded 4 percent of gdp. Now they exceed 9 percent. In the eight years preceding 2008, the deficits averaged $190 billion, according to Quinn. Since 2008, they have averaged $1.3 trillion.

And the debt is piling up. At current spending rates, America’s official debt will hit $20 trillion by 2015. That’s if things go well. The official debt doesn’t include the $60 trillion or so the government has already promised but not funded to Medicare, Medicaid and Social Security.

America’s debt reckoning may be looming.

Analyst Grant Williams notes that in 2012, approximately $3 trillion, or 30 percent of U.S. debt, comes due. And America doesn’t have the money. He says it will be “the biggest refinancing in U.S. history.” But it may also be the beginnings of the end of the government debt bubble.

Either way, with government debt levels inflating rapidly, the risk to America’s economy is expanding. Each year America has to not only find more money to borrow, it also has to convince its lenders to relend the money they have already lent.

The government debt bubble is the single most important economic issue facing America today. It is about to affect virtually every aspect of your life, because America’s economic system is a debt-based system. When the debt bubble explodes, it will feel like a hydrogen bomb just went off in the economy. It will be the last bubble because it will wipe out everything. The world will need a whole new economic system.

Get prepared to greatly reduce your standard of living. You can do it on your own now while it is relatively easy, or it can be forced upon you when the government debt bubble explodes.