America is following in the footsteps of ancient Rome. But the dollar’s value is falling far faster than the denarius ever did. 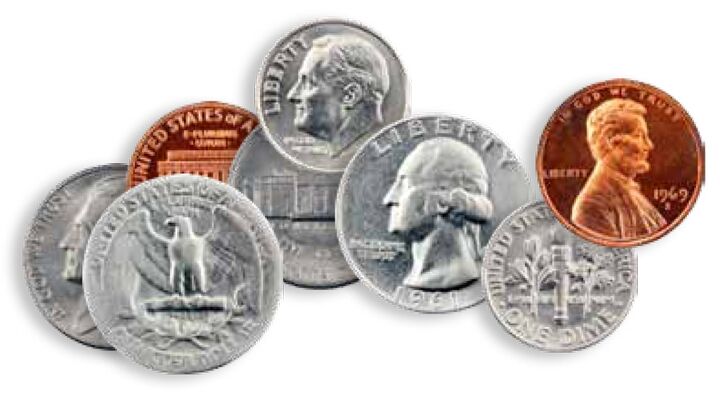 America is following in the footsteps of ancient Rome. But the dollar’s value is falling far faster than the denarius ever did.

The U.S. Mint is facing a big problem. It is the same problem faced by the Roman Empire as it headed toward collapse.

It now costs the government more money to mint pennies and nickels than the coins are worth!

Consequently, the Obama administration has asked Congress for permission to debase the coinage. It smacks of Diocletian ordering the silver out of Roman money so the decaying empire could pay its bills and fight its wars for a little longer. But once Rome started devaluing its money, it set off economic effects that doomed it to fail.

Could America Be Nearing Collapse?

Here is the situation: America loses more than $100 million a year minting pennies and nickels. It costs the Mint 2.4 cents to make a penny and 11.2 cents to make a nickel.

But the metal composition of the penny and nickel has not changed in more than 30 years. So what has happened? The value of America’s money is being destroyed.

The dollar hasn’t plunged just against precious metals. It is also in free fall against copper, nickel and zinc—the metals found in pennies and nickels. In fact, the dollar has plummeted against orange juice, whiskey, beans, bullets, pork bellies, single family houses, automobiles, coal, oil, good suits, health care, tuition, labor costs—and virtually every measurable commodity. If you can name it, it probably costs more today than it did 30, 10 or 5 years ago—even last year.

The Mint reports that if it replaced the copper-coated zinc penny (it took the copper out of the penny in 1982 because it was too expensive) with a steel one, it would still not be profitable. What’s cheaper than steel? Tin? Nope—a penny’s weight of tin would cost more than a nickel. A penny’s weight of aluminum would cost 2 cents. Lead is little cheaper. Anyone for a plastic penny? Clay? Asbestos?

Calls to just get rid of the penny altogether are growing louder. But that will only hide the danger to the dollar for a little longer.

The Dollar Is in Grave Danger

Millions of people, especially retirees, are seeing their life savings devalued. Each year their money buys less and less. Even if they don’t spend a dime, inflation steals it from them.

And since the Federal Reserve is artificially keeping interest rates low (designed to increase big bank profitability, promote consumer borrowing, and thus stimulate the economy), the Fed is driving America’s most vulnerable investors into riskier assets (such as the stock market) in an effort to make their retirement money last longer. A crisis is looming.

During his State of the Union address this past January, President Barack Obama barely mentioned America’s debt and deficit problems. He hardly touched on the massive, society-changing cuts that would be required to balance the budget—or the massive money-printing binge (and money-debasing spree) the Federal Reserve would have to undertake to finance government spending.

By far, the biggest economic issue threatening America’s livelihood is its addiction to debt. This year, America’s federal debt exceeded its gross domestic product; confidence in the dollar is dying; people are seeing their life savings wiped out—and still the president gave the issue no more than a rhetorical nod. Instead, he talked about taxing billionaires. The truth is, the government could take 100 percent of billionaires’ assets (not just income), and America still wouldn’t be able to pay its bills! That’s how big just the nation’s yearly deficit is—let alone its debt.

When ancient Rome started having trouble paying its bills, it did essentially the same thing the Federal Reserve is doing today: Progressive governments reduced the silver content of each coin so they could make more coins to pay the bills. And each time, the empire seemed to prosper—for a while.

But each time, once the temporary stimulus wore off, economic conditions worsened. And politicians, rather than adopt the harsh economic reforms needed to stabilize conditions, resorted to further currency debasement. This vicious cycle was made worse by political infighting and greed.

For Rome, the currency collapse occurred over centuries before Rome collapsed. Early in the first century, the denarius had been essentially pure silver. By the time of Nero, in a.d. 54, the coin’s silver content had slipped to 94 percent; by a.d. 68, it was 81 percent; by a.d. 218, only 43 percent was silver. In a.d. 244, Philip had the silver content reduced to 0.5 percent. At the time of Rome’s fall, the silver content of the denarius was 0.02 percent, and pretty much everyone refused to accept it as payment for anything.

For America—in an age of paper money, printing presses and rapid information dissemination—the currency devaluation has been much quicker. The dollar has lost more than 95 percent of its purchasing power since the creation of the Federal Reserve in 1913.

It is a well-charted route to disaster, but central banks and governments are poor students of history.

Abandoning pennies and nickels is only a start. It will get far worse. Dollar bills will soon come to resemble quarters—and quarters, dimes. Eventually wads of bills will resemble worthless newspaper.

When Rome destroyed its money to pay its bills, it destroyed two of the pillars of its existence: its economy and the faith in its political system. These are the exact two things that America seems to be doing its best to destroy today.