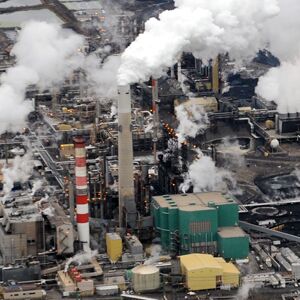 Are the oil sands an economic boom, an environmental bust, or both?

The Battle of Verdun was one of the most devastating battles in World War i and world history. An astounding 40 million artillery shells pulverized the French and German lines. Almost 700,000 soldiers were killed. Untold numbers of war horses and other animals perished in the 10-month-long meat grinder.

Pictures of the landscape resembled a crater-strewn moonscape of barren desolation. Blasted and shredded trees littered the ground. The earth looked as if it had been churned by an enormous mincing machine. Looking down from above, it would have seemed as if a giant machine gun with armor-piercing explosive rounds had opened up from the heavens and blasted potholes all over the countryside, which then filled with water, slime and blood.

Ninety-five years later, millions of overlapping shell craters are still visible. For the Verdun residents, the landscape was changed forever.

Today, some people wonder if a similar sort of destruction is taking place, not across French-German lines, but across U.S.-Canadian lines.

There is an intense battle going on for Canada’s oil. The world’s third-largest oil reserves are up for grabs. But will there really be any winners, or is this another example of a meat grinder whose cost will be measured in both the lives of people and the environment that is destroyed?

One hundred and seventy billion: That is the number of economically recoverable barrels of oil the Canadian oil sands are estimated to hold. It is a big prize. At $100 per barrel, it is a $17.3 trillion prize, enough to pay the official U.S. federal debt with trillions to spare. In a world of global population growth and “peak oil” constraints, it is an economy-changing, potentially country-changing prize that could skyrocket in value even higher in the years ahead.

But who will benefit from this supposed money-gushing cornucopia?

The Canadian oil sands are so expansive that America’s northern neighbors are practically begging for investors to develop them. “Our oil sands are the largest energy project in the entire world,” said Canadian Natural Resource Minister Joe Oliver on a recent trip to China. “We simply don’t have enough capital in Canada.”

It was a shocking statement—not because of what he said, but because of where he said it. Traditionally, Canada has looked to the United States for oil infrastructure development. But those days may be ending. When President Obama refused to permit the proposed Keystone pipeline that would have brought oil from Alberta to Texas refineries, he may have unwittingly changed the special relationship.

For now, Canada’s oil is landlocked, with no way to market. Existing pipelines to America are filled to capacity. But hundreds of thousands of extra barrels of oil per day are set to come onto the market over the next half decade as the oil sands operations are built. Trillions of dollars’ of oil will flow somewhere; that much you can be sure of. If America doesn’t want it for political reasons, the oil companies will find another customer.

And now that China has shown the way, other Asian countries are snapping up chunks of Canada’s oil sands too. Even Thailand’s only oil company has made a multibillion-dollar purchase.

But perhaps more dangerously for America, the Keystone rejection has given a huge boost to its rival: the Northern Gateway pipeline project. It will pump Canadian oil to the Pacific coast for sale to Asia.

With more than $17 trillion at stake, massive battle lines are being drawn. In one set of trenches, Petro China, Sinopec, cnooc and the other Chinese state-owned companies want the Northern Gateway pipeline. Digging in on the other side are oil industry heavyweights Exxon Mobil, Chevron and Conoco Philips, which want Canadian oil sent to their refineries in Texas.

But those are only two belligerents in this high-stakes battle of oil politics. Bringing up the heavy artillery against both the Chinese and U.S. oil interests are big, well-funded, politically connected and powerful environmental lobbying groups. To them, the question isn’t who will get the oil—it’s how to stop everyone from getting the oil.

When President Obama vetoed the Keystone pipeline because of concerns that an oil spill could contaminate the important Ogallala aquifer, the environmental lobby cheered. But as one environmentalist spokesperson pledged, they would be back. Why? Because they are not interested in safer oil, or less-polluting oil—they want no oil, period. To them, a shrunken economy and vastly reduced standard of living is an acceptable price to pay to save the forests and reduce carbon.

And as obnoxious as some far-left activists are, anyone who has taken a flight over the Fort McMurry oil sands region can’t help but be left wondering if all the destruction is worth it. Do the environmentalists have a point after all?

Do they? Stop and think about the cost of our oil-based economy: the price paid in terms of cities covered in haze, in terms of acid rain, and in terms of lost forests and soils. Consider the costs in unnecessary respiratory diseases. And all the related health issues.

From thousands of feet above, the massive scars gouged into the landscape by monster shovels that fill three-story dump trucks with one scoop really do resemble trenches. No trees. No grass. No birds. No animals. Just churned earth. The exposed, sticky tar sands are black, not red. But at sunset it wouldn’t take much for the bubbly, oil-coated settling ponds—all 170 square kilometers of the man-made putrefying lagoons gouged out so far—to take on a bloodish hue. The shovels continue to dig. Smoke stacks, too numerous to easily count, rise like the barrels of artillery pieces or missile silos, belching and flaming their continuous plumes of sulfur and other harmful pollutants. Then there are row after row of massive round storage tanks, each with earthen berms. These are the supply depots, containers holding gazillions of gigajoules of useful, and painfully won energy.

And from these behemoth cisterns run the pipelines: the snake-like tubes radiating out like tank barrels, pointing the direction of attack. Through them shoots the dirty, toxic, polluting, but totally necessary and essential fuel of modern society—oil.

It’s a little more than just reminiscent of a battlefield. And in one way or another, we are all paying a price.

For a positive, hope-filled picture of the future, and how we will get there, read The Wonderful World Tomorrow—What It Will Be Like.