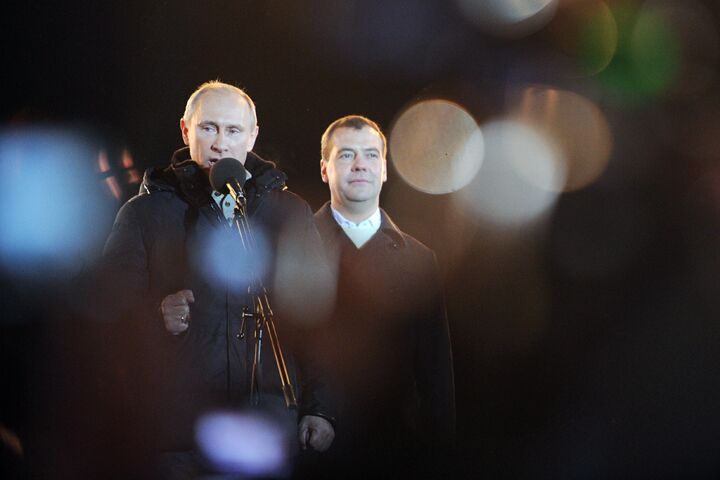 In many ways, Putin has taken Russia back to a time before the rise of the USSR—back to when the country was an imperial autocracy ruled by the czar and dominated by Eastern Orthodox Christianity.

Thanks to kgb friends, the Russian Orthodox Church and a few bands of bus-riding zealots who voted at more than one polling station, strongman Vladimir Putin claimed victory in Sunday’s presidential election.

Russian Orthodox Patriarch Kirill has made no secret of his support for Putin, whom he regards as the guarantor of the country’s stability. “You have played an enormous personal role to set the course of history in our country,” Kirill told Putin last month during a meeting with other religious leaders. “I would like to thank you.”

The arch patriarch of Moscow and All Russia then went on to say that Russia managed to overcome the chaos following the breakup of the ussr “thanks to a divine miracle and with the active assistance of the leaders of our country.”

In many ways, Putin has taken Russia back to a time before the rise of the ussr—back to when the country was an imperial autocracy ruled by the czar and dominated by Eastern Orthodox Christianity.

Recently, Putin’s United Russia political party introduced a bill to the Duma that proposes a tenfold increase in fines slapped on those who are caught insulting religious beliefs. This piece of legislation was proposed in response to an incident where five masked members of a feminist group performed a “punk prayer” attacking the Orthodox Church for its close ties to the Kremlin.

In return for such religious protection, the Patriarch Kirill and his Orthodox hierarchy have done all they can to grant Putin spiritual legitimacy in the eyes of the Russian people. Indeed, Kirill has gone even further than this in his efforts to consolidate Russian control over the people of Ukraine, Belarus and Georgia.

The Texas-based think tank Stratfor has indicated that Putin is explicitly using the evangelization efforts of the Russian Orthodox Church to get the people of former Soviet states to look to Moscow for leadership.

Interfax reports that the Moscow Patriarchate has been particularly inspired with Prime Minister Putin’s idea to set up his own “Eurasian Union,” modeled on the European Union. “I hope the Eurasian Union will enter the history as one of the strongest international associations,” said the head of the Synodal Department for Church and Society Relations, Archpriest Vsevolod Chaplin, in an interview filmed last year.

As Herbert W. Armstrong long predicted, the European Union is morphing into a final resurrection of the Holy Roman Empire (a German-dominated dictatorship bound together by the Roman Catholic religion). Likewise, Putin’s Eurasian Union represents an attempt to morph the vast stretch of land from the Carpathian Mountains to the Pacific coast back into a final incarnation of Imperial Russia (a Kremlin-dominated empire bound together by the Russian Orthodox religion).

Expect a great clash in the near future as these empires compete for global dominance. For biblical proof of this coming clash, read our booklet Russia and China in Prophecy.