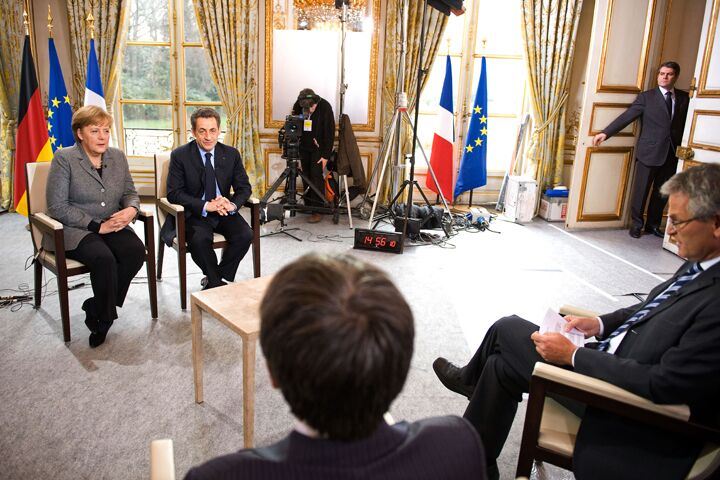 After unmaking kings in Italy and Greece, Chancellor Merkel tries to make one in France.

German Chancellor Angela Merkel is campaigning for French President Nicolas Sarkozy in the run-up to the French presidential elections, which start on April 22.

“The sober chancellor and the peripatetic president have established a pact, the likes of which has never before been seen in the Franco-German relationship,” writes Spiegel.

“For Sarkozy, she is discarding the reserve that chancellors have for decades felt proper when it comes to democratic elections outside German borders,” it writes.

Sarkozy is trying to portray himself as the man who can turn France into Germany. He plans to copy the reforms that have made it the economic leader of Europe. Spiegel writes: “Even close party allies feel that Sarkozy’s weakness for Germany is becoming an obsession.”

The first step in the joint campaign came February 6, when the two gave a tv interview where Mrs. Merkel said: “I support Nicolas Sarkozy on all levels, because we belong to political parties that are friends.” She made clear that when supporting Mr. Sarkozy, she was wearing her head of the Christian Democratic Union hat, not the German chancellor hat. She also claimed to be doing the same thing that Sarkozy had done for her back in 2009.

But, as Spiegel points out, “No German government leader has ever intervened so openly in a foreign general election.” Mrs. Merkel’s claim to be reciprocating Sarkozy’s support for her in 2009 is “only half the truth,” it writes. “When Sarkozy visited her in Berlin in May 2009, four months before her reelection bid in September, the event was hosted by the youth organizations of the cdu and his ump party—and wasn’t a pure campaign event.”

The campaign is driving the two most powerful nations in mainland Europe closer together. EU President Herman Van Rompuy said the debt crisis is now causing a “Europeanization of national political life.”

The Associated Press writes: “The cross-border campaigning reflects a more concerted effort toward the erosion of national sovereignty that leaders like Merkel see as the way for debt-laden Europe to survive in a world increasingly dominated by Asian economic powers such as China.”

Mr. Sarkozy’s competitor, Socialist François Hollande, would oppose everything that Chancellor Merkel is trying to do in Europe—which is pushing her to forcefully support Sarkozy.

Meanwhile, if Sarkozy wins the election, he will be in Merkel’s debt. He is already pushing France to follow Germany’s lead. This support in the election makes France even more subordinate to Germany.

The German-led EU has overturned governments in Greece and Italy. Now Chancellor Merkel is trying to keep a friendly one in power in France. Germany’s dominance of Europe is made clearer every day.