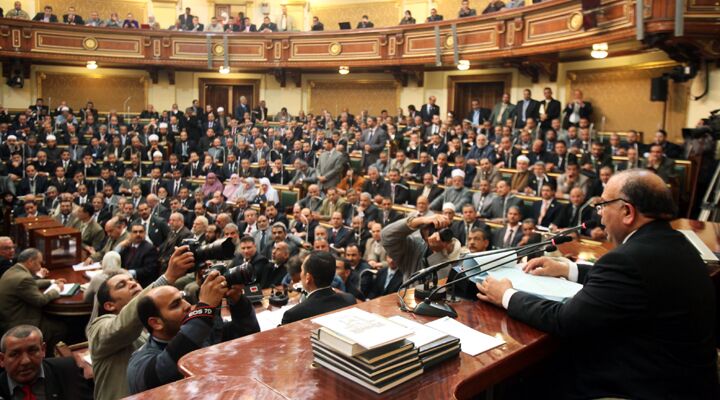 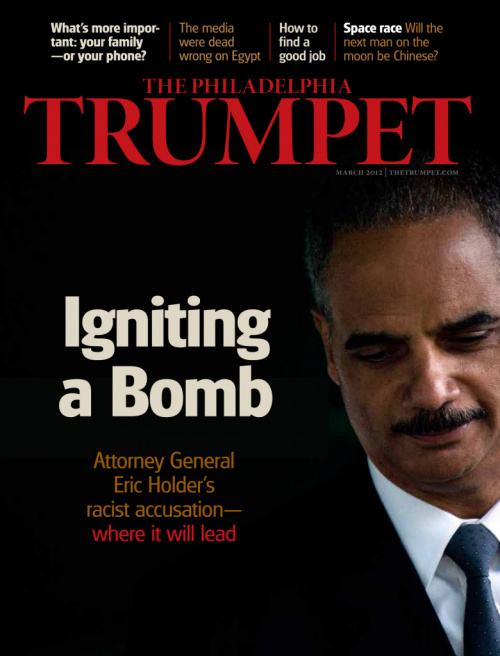 Dr. Seuss didn’t just write brilliant children’s books. During World War ii he supported America’s war effort through cartoons. One of his most memorable showed a line of eager businessmen lining up to buy their “ostrich bonnet”—the neck and head of an ostrich that fitted onto their heads—after which, the men knelt down and buried their new ostrich heads in the sand.

“Forget the terrible news you’ve read,” said a sign. “Your mind’s at ease in an ostrich head.”

Today, the mainstream media are selling ostrich heads: excuses to bury our heads in the sand.

Egypt has demonstrated this perhaps more quickly than anywhere else.

How Wrong Can You Be?

The press trotted out a host of experts to assure us that the Muslim Brotherhood and Islamic parties were not all that popular in Egypt. Their thoughts got most of the space and the last word in the discussion.

Men like former head of the International Atomic Energy Agency Mohamed ElBaradei were considered the foremost experts on the subject. “For years the West has bought Mr. Mubarak’s demonization of the Muslim Brotherhood lock, stock and barrel, the idea that the only alternative here are these demons called the Muslim Brotherhood who are the equivalent of al Qaeda,” he told the New York Times. “I am pretty sure that any freely and fairly elected government in Egypt will be a moderate one …” (Jan. 27, 2011).

On Feb. 3, 2011, a New York Times article with the title “Egypt’s bumbling Brotherhood” assured readers that “The street … manifests little support for the Brotherhood.” “There is little reason for the United States to fear a takeover by the Muslim Brotherhood,” it said, arguing that the poor people who received charity from the organization would not bother to vote for it. It had a member of the Muslim Brotherhood’s guidance council, Essam El-Errian, write an op-ed for it, where he assured the world, “We do not intend to take a dominant role in the forthcoming political transition.”

As recently as December 11, Nicholas D. Kristof wrote in the Times: “Our fears often reflect our own mental hobgoblins. For a generation, we were terrified of secular Arab nationalists, like Gamal Abdel Nasser, who ruled Egypt in the ’60s. The fears of the secularists proved overblown, and I think the same is true of anxieties about Islamic parties in Egypt today.”

Even the usually solid Foreign Policy magazine got it wrong. “The main rationale for delaying elections comes from those who fear an Islamist-dominated transitional parliament,” wrote Dalia Mogahed on November 28. “This view, however, shared by many in the West, is likely exaggerated. While the Muslim Brotherhood enjoy support from a significant segment of Egyptian society, more Egyptians see a parliament in which the group holds a strong, influential position as bad for the country.”

The less solid Huffington Post published an interview with former UN Secretary General Boutros Boutros-Ghali. “[T]he power of the Muslim Brotherhood has been exaggerated,” he said. “It’s a European obsession more than an Arab reality” (March 25, 2011).

Now the results are in, it turns out that all of the above had their heads in the sand. Hardline Islamist parties have won 72 percent of all available seats in the lower house of Egypt’s parliament.

Proved utterly wrong, the media immediately began looking for another way to bury their heads in the sand.

The new strategy is to argue that the Islamist parties aren’t so bad after all. During one of Egypt’s rounds of elections, cnn wrote, “The relatively moderate Muslim Brotherhood’s Freedom and Justice Party won more than 4 million votes in the runoff for the second round of a three-part process” (emphasis added throughout).

The New York Times spun it this way: “Most races pit Islamists against Islamists, with the mainstream Muslim Brotherhood competing against the ultraconservatives known as Salafis.”

Here is the reality: The Muslim Brotherhood “has influenced many terrorist leaders—including Osama bin Laden and Ayman al Zawahiri—and many of its members have engaged in terrorist activities,” according to the Anti-Defamation League.

In a way, the New York Times got it right, though. The Muslim Brotherhood is mainstream: Its political wing is the most popular party in Egypt.

cnn went on to describe the al-Nour Party as “conservative.” So is it an Egyptian version of the Republicans? Not exactly. It calls for sharia and strict punishments, including flogging and amputation. A member of its supreme committee, Shaaban Darwish, said, “We must obliterate the liberalism that was introduced by Sadat and Mubarak and reinstate the rule of Islam.”

According to this new myth, the Muslim Brotherhood will get on fine with Israel. The media reported that al-Nour said it wouldn’t end Egypt’s historic peace treaty with Israel. “Egyptian Islamists OK with Israeli peace treaty” was one headline on cbs News.

“The prevailing optimism in media reports concerning the Egyptian Muslim Brotherhood and the Salafist party’s readiness to adhere to the peace treaty with Israel is based on general statements made by senior officials in both parties,” wrote Lt. Col. Jonathan D. Halevi (Ret.) for the Jerusalem Center for Public Affairs. “Yet a more rigorous examination of the two parties’ stances identifies a markedly different tendency. Both seek a way to cast off the Camp David agreement in a manner that will incur minimal diplomatic and economic damage to Egypt, and restore Egypt to its leading role in the circle of states confronting Israel” (Dec. 26, 2011).

He cited a number of leaders from both parties, including leader of the Muslim Brotherhood Dr. Mohammed Badie, saying the treaty should be abandoned or key points amended.

“The optimism regarding a radical change in the positions of these extreme Egyptian Islamic movements regarding Israel grasps at the straws of general statements that do not attest to an ideological reversal, but convey the tactics for obtaining the strategic objective: casting off the Camp David agreement and transforming Egypt into a prime regional force that will lead the diplomatic and military battle against Israel,” Halevi concluded.

Indeed, the Brotherhood’s deputy chairman, Rashad al-Bayumi, told the Italian newspaper L’Unita on January 2: “The Muslim Brotherhood … claim[s] the right to revise, wholly or in part, treaties such as the one with Israel. One thing is for certain: Parliament will have the last say, and, if necessary there will be a popular referendum.”

The Islamists are simply trying to have their cake and eat it too: They are looking for a way to end the peace treaty with Israel while maintaining for as long as possible the flow of money and arms they receive from America.

And meanwhile, they’re giving the American ostriches more excuses to keep their heads in the sand.

This puts Israel in deep danger. Geographically and geopolitically, Egypt is crucial to Israel’s security. The Israel-Egypt peace treaty has been the backbone of the Jewish state’s national security for nearly 30 years. Israeli leaders have heavily relied on the enmity that existed between Egypt and Israel’s number one enemy, Iran.

Now that enmity is gone. Israel is scrambling to respond to the threat of a radicalized Egypt. It knows that if Egypt joined up with Iran, then suddenly it would be caught in an Islamist vice-grip: Hezbollah in the north, Fatah in the east, and Hamas and Egypt in the south could launch a coordinated attack. The little nation is literally surrounded by radical Islam.

The Source of Accurate Forecasting

Are you going to trust the news outlets that made predictions just months ago that have already been proved wrong? Or will you heed the source that has been forecasting the Egyptian revolution for years?

In 1996, in the first edition of his booklet The King of the South,Trumpet editor in chief Gerald Flurry forecast that Egypt would eventually ally with Iran. “I believe … we are to see a radical change in Egyptian politics!” he wrote.

How could he have known? Mr. Flurry based his forecasts on biblical prophecy.

These prophecies, written thousands of years ago, are far more accurate than predictions by journalists written last year.

After quoting a pivotal prophecy in Daniel 11, Mr. Flurry asked, “Does that mean radical Islam will soon control or direct Egyptian politics?”

“In the past, Egyptian politics have been changed radically by Middle East assassinations and other violent acts directed by Iran,” he continued. “Such acts can rapidly change the minds of people. Revolutions often result. However it happens, Egypt will also become the enemy of the king of the north [Europe].”

Iran’s Fars News Agency even publicized some of these predictions. Plagiarizing one of our articles, it wrote in late 2007: “Trumpet editor in chief Gerald Flurry has predicted for over 13 years that Iran would be the king of the Middle East, and that we would witness an alliance take place between Iran and Egypt.”

Egypt is turning radical before our eyes. This development ties in to a host of prophecies the Trumpet has been drawing attention to for years. It puts Israel in great danger. Egypt’s control of the Suez Canal means radical Islam can hurt Europe more than it ever could before. As Islamism grows in Egypt, that nation will ally with Iran, radically increasing the power of this aggressive movement.

So whom will you trust? The liberal media with their heads in the sand—the same people who said the Islamists had no chance of winning an election in Egypt—who now say the Muslim Brotherhood will abandon radical Islam? Or the Bible, that prophesied this outcome millennia ago?

Mr. Flurry has additionally predicted, based on Daniel 11, that Libya and Ethiopia would also fall to radical Islam. If you need any further proof of the Bible’s accuracy, watch these nations!

These prophecies are described in detail in our free booklet The King of the South. Request this booklet that was originally written years ahead of its time. Avoid the deadly deceit of the mainstream media, and get the real scoop on what is happening in the Middle East!