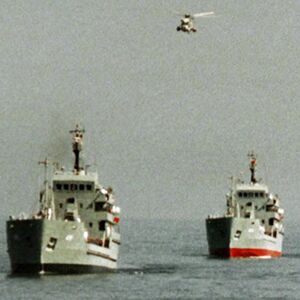 The current tension in the Persian Gulf provides a glimpse into the larger conflict looming.

Thirty-four miles. That’s the width of the Strait of Hormuz, the strategic waterway separating Iran and the Arabian peninsula through which 40 percent of global seaborne oil trade occurs. Right now, events in this tiny passageway threaten to transform the global economic malaise into full-scale economic calamity, and quite possibly set off a major war.

Although it’s long been recognized as a point of contention between Iran and the West, the Hormuz passageway has come into sharper focus in recent weeks. Last month, Iran began a 10-day naval exercise in a 1,200-square-mile stretch of the Persian Gulf, including Hormuz. More than a few Iranian politicians were quick to admit that the games were less about demonstrating strength than about showing Iran’s ability to cause global chaos by closing down the key passageway.

“Soon we will hold a military maneuver on how to close the Strait of Hormuz,” a member of the Iranian Parliament’s National Security Committee, Parviz Sarvari, said on December 12. “If the world wants to make the region insecure, we will make the world insecure.” Isa Ja’fari, another politician, made similar remarks before the Iranian Parliament on December 18. “If an oil embargo is placed on Iran, we will not allow a single barrel of oil to pass through here to the belligerent countries,” he said. “America should know that the world’s energy gullet, that is to say, the Strait of Hormuz, is in our hands.”

According to multiple Iranian officials, it is now state policy to close the strait if Iran is attacked.

Naturally, the recent naval exercises, together with the blustery remarks of Iranian politicians, caught the world’s attention. Within days of Iran conducting its war games, Israel and the U.S. announced they had decided to postpone “Austere Challenge,” a large joint military exercise slated to occur in the region in May. This week, the U.S. Treasury declared sanctions against Bank Tejarat, Iran’s third-largest bank.

But the most noteworthy response came from Europe. On Monday, all 27 EU member states agreed to refuse oil imports from Iran, including crude oil, petroleum and petrochemical products. Additionally, the EU announced a variety of financial restrictions on Tehran, including freezing assets held in Europe by Iran’s central bank.

This is significant! Europe has implemented sanctions on Iran before, but not like these. These are by far the toughest Europe has meted out. Following Monday’s announcement, Russia slammed the EU for making a decision that will only make the problem worse. China continues to reject sanctions. Meanwhile, India said it would take full advantage of the cheaper prices Iran will now demand for its oil and purchase as much as possible. Implementing sanctions wasn’t an easy, or popular, decision.

Of course, it still remains to be seen if the EU will stay united and strong. The sanctions won’t be fully implemented till July 1, and the decision will be reassessed in May. Still, the EU has clearly taken its toughness to the next level and shown that it’s willing to confront Iran more directly.

It’s also telling that it was the European Union, not individual member states, that announced this embargo. The EU, at least in this instance, appears to have a single,united foreign policy!

Iran has taken notice too, and has started to direct its criticisms at Europe, in addition to the United States. Speaking on state television, Iranian Foreign Ministry spokesman Ramin Mehmanparast rejected the EU’s sanctions as “psychological warfare,” and warned that imposing sanctions “will not stop our nation from obtaining its rights.” Deputy Foreign Minister Abbas Araqchi warned that the more sanctions were imposed, “the more obstacles there will be to solve the issue.”

Rather than compromise or capitulate, it seems Tehran is ready to play chicken with Europe and the U.S. Iran has also said it’s planning another round of war games in Hormuz next month. Meanwhile, on Sunday the uss Abraham Lincoln, an aircraft carrier, together with warships from France and the UK, entered the Persian Gulf. Both sides appear to be barreling toward the other, with neither appearing ready to swerve any time soon.

The consensus among analysts is that reason and logic will prevail. Many argue that Iran, which is significantly outnumbered and outgunned, will back down, and that a larger conflict will be avoided. In a well-reasoned piece this week, Stratfor ceo George Friedman explained that the U.S. and Iran will likely come to some sort of deal, one that involves a U.S. drawdown in the Middle East in return for a more compliant Iranian foreign policy.

These are rational arguments. And it’s possible, even likely, that in the short term some sort of political arrangement will be reached that will diffuse the tension. We need to be careful, though, of dismissing these events as simple geopolitics. The truth is, no amount of reconciliation or “politics” will ever reconcile the fundamental differences between Iran and the West.

Iran is led by radical Islamists, men who live to annihilate the West and then establish a global Islamic caliphate. For these men, negotiations and compromise are the means to that end. Conciliatory gestures are not genuine acts of peace. Rather, each is calculated to further the greater cause. When conditions are right, when the benefits of confrontation outweigh the costs, they will take the confrontation to the next level.

Understanding this reality requires a basic understanding of human nature. A little insight into history helps too. Many past tyrants, whether Hitler, or medieval kings, or African warlords, have played politics—made promises, made compromises, given ground—simply to buy time. Then, when the right moment came, when the military was ready, the fortification secure, the alliance in place, they replaced diplomacy with destruction.

In addition to history and human nature, another vital asset provides insight into the tension escalating in the Strait of Hormuz. Here at the Trumpet we find it impossible to watch events in the Persian Gulf and not see the prophecy in Daniel 11. In verse 40, God says via His prophet that “at the time of the end shall the king of the south push at him: and the king of the north shall come against him like a whirlwind, with chariots, and with horsemen, and with many ships ….” Notice first, this event is occurring at the “time of the end,” in the days right before Christ’s Second Coming.

Notice the word “push” in Daniel 11:40. In Hebrew, it means to push at, or to wage war. Think about Iran’s nuclear weapons program, its threat to close down Hormuz, its support of terrorism in Israel and around the world. The primary goal of Iranian foreign policy is to “push” and provoke, to aggravate and infuriate.

This prophecy was written 2,500 years ago—and it describes the present situation in the Persian Gulf perfectly!

Daniel 11:40 says that the “king of the north” will react, and eventually with overpowering force! We are beginning to get a glimpse of how this will happen. On Monday, Europe got tougher with Iran than it ever has. Based on Daniel’s prophecy, expect Europe to get even tougher and more confrontational toward Iran!

Keep watching the Strait of Hormuz. And remember, the tension between Iran and Europe is more than geopolitics—it’s an insight into Daniel 11:40!