World leaders are calling for a revamp of the Nuclear Non-Proliferation Treaty. But there is something history tells us about disarmament treaties that we must understand! 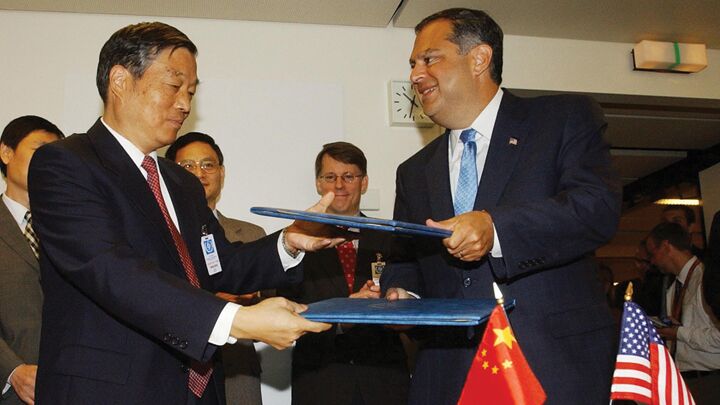 World leaders are calling for a revamp of the Nuclear Non-Proliferation Treaty. But there is something history tells us about disarmament treaties that we must understand!

The first biblical example comparable to a disarmament treaty is found in Genesis 34. Schechem, son of the Hivite King Hamor, “defiled” Jacob’s daughter, Dinah. Hamor knew the wrath this evoked from Dinah’s brothers, so he sought to appease them by entering into an agreement where Schechem married Dinah. He would pay any dowry; he would also allow the sons of Jacob to share the Hivite land and intermarry with them. Jacob’s sons accepted this under the provision that all the Hivite males be circumcised.

When the Hivites agreed to this, they essentially “disarmed.” While the men were sore and disabled from the circumcision, the sons of Jacob “came upon the city boldly, and slew all the males … and spoiled the city, because they had defiled their sister” (vv. 25, 27).

Ever since this example, treaties for disarmament have only benefited those who DIDN’T disarm and cursed those who trusted in such flimsy promises.

Laurence W. Beilenson’s 1969 book The Treaty Trap studies the unreliability and frailty of treaties—including disarmament treaties—over a three-century period in U.S. and European affairs. Beilenson’s book demonstrates that they do not work and are therefore usually worthless—and worse than worthless when nations rely on them.

One pattern in international relations is that provisions of any disarmament treaty “have usually been observed until the promising nation thought it had the strength to violate without serious consequences” (Beilenson).

Witness our current situation. For over 30 years, the main guarantee against the proliferation of nuclear weapons has been the Nuclear Non-Proliferation Treaty (NPT) of 1970—which required its signatories to agree on just five nations that could possess nuclear weapons legally. This was dandy for those who believe that men are fundamentally good and will stand behind their promises. But what has been the reality?

Last year, Iran admitted violating the treaty for 18 years—though it insists it was for energy purposes and not for developing nuclear weapons. Also last year, North Korea announced it would simply withdraw from the treaty. For a while, Israel, India and Pakistan have been known to possess nuclear weapons. And now we see all the hype over Pakistan and its “renegade” scientist being let off the hook, despite spreading nuclear know-how to Libya, Iran, North Korea and who-knows-where-else.

The world is staring down the dark alley of the nuclear black market—and realizing that the NPT is not stopping the spread of nuclear weapons. So what do men do? They do as so many leaders have done through history—buy another promise to replace the broken one, without realizing that the new promise is just as unreliable as the old.

Today’s discussions of an NPT overhaul include proposals by U.S. President George W. Bush, who wants to bargain with “those states that promise not to pursue nuclear weapons” by offering them “help in producing nuclear fuel for power generation” (International Herald Tribune, February 12). This is a historic case of treaty-reliance.

History shows us just how reliable are such promises.

After World War I, the Allies imposed a disarmament treaty on Germany. The treaty was the most air-tight legal document among nations ever devised; the inspection and policing system was unmatched by any before it. But before long, believing Germany was disarming, everyone let their guard down. England and France demilitarized and composed another treaty to do away with the inspection process. Germany, however, was actually re-arming with Soviet help.

That’s what disarmament treaties do. The “good guys” trust them—the “bad guys” ignore them. What you end up with is a situation such as where England and France, naively believing Germany was unarmed, let their armor rust and were ill-prepared for Germany’s surprising military advances in the late 1930s.

Not all nations believe that treaties are binding. Beilenson wrote, “Neither Hitler’s Germany nor Mussolini’s Italy had the slightest compunction about breaking treaties.” The Soviets believed in the theory that “treaties are made to be broken” (ibid.).

Even if certain nations don’t ignore the treaties, they find sly ways around them. Germany abided by the official numbers it was allowed to have as a standing army—but it trained all those men to be officers. When the right time came, Germany was able to draft anyone fit for military service under a strong core of military leadership already in place.

The Washington Naval Treaty of 1922 was to limit Japan’s naval development—but it left the country free to build its military in other categories. Japan abided by the treaty for a brief period, until it was ready to conquer China.

Beilenson knew, from his research, that a nuclear non-proliferation treaty would be a dangerous paper-chain to cling to. “Therefore, the wisdom of making such a treaty would reduce itself to a debate about whether the provisions for inspection and verification in the treaty were completely dependable” (ibid.). He adds that “the history of weapons also shows that whenever men have invented weapons, they have thereafter IMPROVED THEM. There is no way to remove nuclear knowledge from men’s brains, or to prevent its transmission to other men. The knowledge will be further augmented by the development of peaceful uses of nuclear energy. With the advance in science, there are other methods of warfare that can be invented as deadly as nuclear weapons …” (ibid.; emphasis mine).

Beilenson says that a treaty can attempt to limit nuclear weapons, but what’s to prohibit a rogue state from exploring other means of destruction? One diplomat said about today’s nuclear situation, “Technology that was once classified is now more open, and more countries can get access” (www.boston.com, February 10). Can a mere piece of paper stop WMD from getting into fanatical hands?

Whatever men’s efforts at stemming the spread of WMD, we know from Bible prophecy that the paper-chains they set up will not hold. Jesus Christ said that the final world war would be so grave that “no flesh” would be saved alive, unless those days were shortened.

Only through Christ’s intervention, “[T]hose days shall be shortened” (Matt. 24:22). The only way man can achieve true, widespread disarmament is through enforcement by a superior power. We must not trust in men for the disarmament of the world—only the unbreakable Word of Almighty God!

At that time, according to Micah 4:3, Jesus Christ will “judge among many people, and rebuke strong nations afar off; and they shall beat their swords into plowshares, and their spears into pruninghooks: nation shall not lift up a sword against nation, neither shall they learn war any more.”