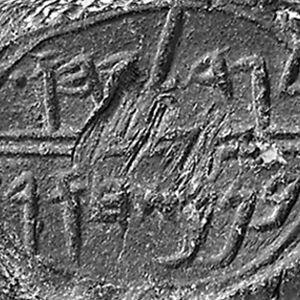 Exclusive exhibit opens to the general public on January 16.

Next week, the Armstrong International Cultural Foundation presents “Seals of Jeremiah’s Captors Discovered!” The archaeology exhibit features two of the most important artifacts ever found in Jerusalem—clay seals bearing the names of two princes who persecuted the Prophet Jeremiah during the last days of the kingdom of Judah.

The relationship between these two bullae—discovered by Dr. Eilat Mazar in 2005 and 2007—and the biblical account in Jeremiah 37 and 38 is nothing short of remarkable. I previewed the exhibit last night and it was like walking through the pages of the Bible!

Jeremiah’s life and work is one of the most fascinating accounts in the Bible. He pleaded with the people of Judah to consider their sinful ways and to repent. He delivered his prophetic warning to the very highest levels of Judah’s monarchy. The inscriptions on those two bullae are not the names of some insignificant commoners. They were members of Judah’s royal court—people who heard Jeremiah’s prophetic message and then rejected it, which led to Judah’s captivity in Babylon.

During this same time, while Jeremiah was warning about Judah’s demise, he also prophesied that David’s throne would be “rooted out” of Judah at the end of King Zedekiah’s reign and later built up and planted elsewhere (Jeremiah 1:10). Herbert W. Armstrong wrote about this transplanting in his masterful work The United States and Britain in Prophecy.

The throne of David must be in existence today or else one must conclude that God broke His covenant with David (2 Samuel 7:13). In Luke 1:32, God promised to give the throne of David—not some non-existent throne—to Jesus Christ at His Second Coming.

Jeremiah also wrote about this soon-coming millennial reign of Jesus Christ in chapter 23, verse 5: “Behold, the days come, saith the Lord, that I will raise unto David a righteous Branch, and a King shall reign and prosper, and shall execute judgment and justice in the earth.”

Underneath Christ, Jeremiah explained, will be King David—“whom I will raise up unto them” (Jeremiah 30:9). David, of course, had been dead for about 400 years when God inspired Jeremiah to write this. But God will resurrect him at the return of Christ to assist Jesus in ruling over the descendants of Jacob. Below David, as Jesus confirmed in Matthew 19:28, the 12 apostles will sit on “twelve thrones” and judge the 12 tribes of Israel.

It will be a perfect, world-ruling family government that promotes and enforces a new and better way of life based upon the immutable laws of God, as revealed in the Holy Bible. And it all revolves around the throne of David (Isaiah 9:7).

During the days of Judah, God commissioned Jeremiah to warn the kingdom, including the royal court, that David’s throne was about to be pulled down and overthrown. After that, however, God instructed Jeremiah to transplant and build up that throne elsewhere! Few people understand this second half of Jeremiah’s mission.

After the king of Babylon burned Jerusalem to the ground, took King Zedekiah captive and then killed all of his sons, it may have seemed like David’s throne ceased to exist. “Certain it is that from that day on,” Mr. Armstrong wrote in The United States and Britain in Prophecy, “the throne never again has existed in Judah, in Jerusalem, or among the Jews!”

It was definitely uprooted and removed out of Judah. But it did not end. It did not disappear.

Jeremiah said so! “For thus says the Lord: David shall never lack a man to sit on the throne of the house of Israel” (Jeremiah 33:17; Revised Standard Version). God made a covenant with David, promising to preserve his royal dynasty forever (read 2 Samuel 7). It was an unbreakable covenant that God said would culminate in the millennial reign of Jesus Christ over all the Earth!

This was the message Jeremiah delivered to Judah’s royal court while he was “shut up in the court of the prison” (Jeremiah 33:1; read the entire chapter). He was in prison in Jerusalem, writing this passage, even as the king’s houses were being “thrown down” (verse 4). The throne of David was being rooted out and pulled down even as he wrote!

But Jeremiah knew God would spare his life and give him miraculous favor with the king of Babylon so that he could fulfill the all-important second half of his God-given commission.

“Behold, the days come, saith the Lord, that I will perform that good thing which I have promised unto the house of Israel and to the house of Judah” (verse 14). Notice! The Davidic covenant was made with all of Israel before it divided into the two nations of Israel and Judah during the days of Rehoboam and Jeroboam. After the division, David’s throne remained in Jerusalem with the kingdom of Judah. But the original promise was made to all 12 tribes.

Here in Jeremiah 33, the prophet said David’s dynasty would “never lack a man to sit on the throne of the house of Israel.” When Jeremiah wrote this, the throne was being rooted out of Judah—but it would later be planted in one of the lost tribes of Israel, as Mr. Armstrong proved in The United States and Britain in Prophecy.

Jeremiah staked his life on these immutable promises of Almighty God! He knew David’s dynasty would culminate in the reign of Jesus Christ and the establishment of God’s Kingdom on Earth.

Notice again what he wrote while locked in prison: “In those days, and at that time, will I cause the Branch of righteousness to grow up unto David; and he shall execute judgment and righteousness in the land” (verse 15).

It’s an awe-inspiring history! In fact, it’s a story that you should, if you are able, come see for yourself! Beginning Monday, January 16, and continuing through October 16, inside the grand lobby of Armstrong Auditorium, you are very welcome to personally examine the extraordinary artifacts, interactive maps, rare photographs, original paintings and informative videos that tell the inspiring story of ancient Israel’s dramatic rise to power during the days of King David, Judah’s tragic collapse during the reign of King Zedekiah, and of the miraculous work of Almighty God, who raised up a loyal prophet in the midst of Judah’s national calamity to preserve a royal dynasty He promised to establish forever!