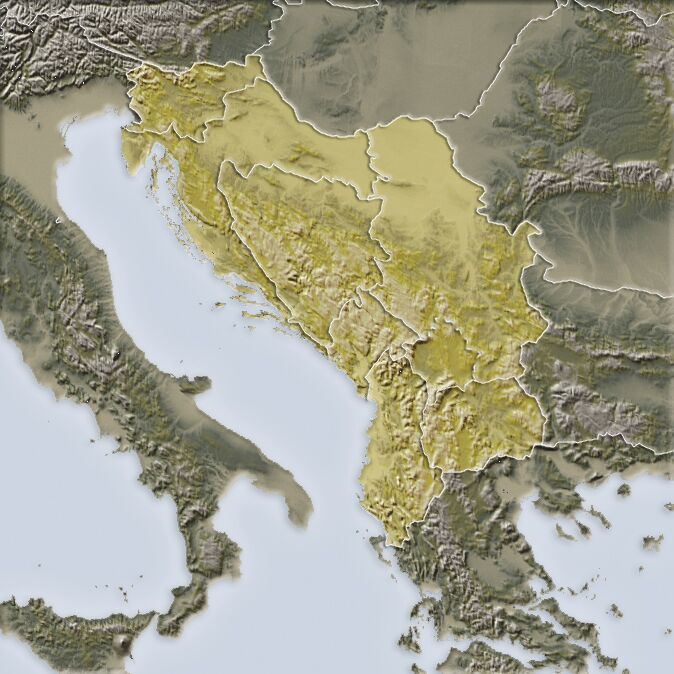 Germany’s strategy to conquer this strategic territory is coming along nicely.

Staying abreast of developments in the Balkans can be daunting, even for the most avid news watcher. Sandwiched between the Adriatic and Black seas, the peninsula is a complicated mix of religions, peoples and cultures. Its complexity and obscurity, together with its seemingly irrelevant geopolitics, makes it a region easy to ignore.

To do so, however, would be a mistake.

The Balkan Peninsula has been the convergence point of three major civilizations—Catholic Europe, Muslim Turks and Russia. Historically, when these power blocs have imperial ambitions, the Balkan Peninsula is one of the first regions in which these ambitions have been manifested. For Germany, Russia and the Turks, the Balkans are a stepping stone, territory needed in the quest to achieve larger aspirations of empire. In this sense, they are an early warning signal: When you see Europe conquer the Balkans, chances are it’s not going to stop there.

This is why the recent tension between Serbia and Kosovo, which was exacerbated by Germany and the European Union, is significant.

The root of the problem has to do with Kosovo’s declaration of independence from Serbia in 2008. While Kosovo has been accepted as an independent state by the West and some allies, the majority in Serbia refuse to accept Kosovo’s sovereignty. It’s been three years since Kosovo’s declared independence, and still more than 60,000 Serbs living in north Kosovo refuse to pay homage to Pristina, the capital city; they continue to rely on Belgrade for support.

Last week, clashes erupted when nato peacekeepers (who were primarily German; the nato task force in the Balkans is run by Europeans) demolished roadblocks near the Jarinje border crossing in north Kosovo. Kosovar Serbs had constructed these roadblocks after Kosovo’s secession in 2008 in order to prevent the new Kosovo government from establishing sovereignty over the border with Serbia. At least six Kosovar Serbs and four nato peacekeepers were wounded in the violence.

The clashes occurred just as representatives from Kosovo and Serbia were about to meet in Brussels to engage in EU-mediated talks aimed at forging a peace arrangement between Belgrade and Pristina. With tensions flaring, the talks were canceled. Meanwhile, Europe is piling pressure on Serbia to compromise and make amends with Pristina. Europe’s primary rod of leverage in this regard, of course, is Serbia’s desire for EU membership.

During her trip to the region in August, German Chancellor Angela Merkel made it clear that if Serbia wanted to join the EU, it must be prepared to relinquish northern Kosovo and recognize Kosovo’s independence. That was reaffirmed this week at a summit in Belgrade when Austria’s minister for European and international affairs, Wolfgang Waldner, told Serbia that setting the date for talks about Serbia’s entrance into the EU would depend largely on Belgrade sorting out “territorial conflict with neighboring countries.”

Unsurprisingly, the remark didn’t sit well with Serbia. Interior Minister Ivica Dacic responded by lambasting Waldner and then criticizing nato for its hypocrisy and constant trouble making in the region. He also made it clear that Belgrade was not about to compromise on Kosovo, even if it meant jeopardizing Serbian-EU relations. Regarding Europe’s treatment of Serbia, Thomas Fleiner, a professor at Fribourg University and former adviser to the Serbian government, told swissinfo.ch: “The EU is … playing with the Serbian government. They always put new conditions on the way to membership. That is the old way colonial powers dealt with countries. That’s not the way you should deal with a country which you consider as your partner.”

Although it’s under tremendous pressure from Europe, Serbia is not without options.

The first is Russia. Over the past decade, Moscow has been actively and aggressively reasserting itself as a regional and even global powerhouse. Under Vladimir Putin, the Kremlin has stepped up efforts to secure influence on its periphery, and particularly along its border with the European Union. (This, essentially, was the reason for Russia’s invasion of Georgia in August 2008.) Though it doesn’t fall within Russia’s immediate sphere of influence, the Balkan Peninsula is an area on which Moscow is always looking for opportunities to set up a base of support. And not only is Serbia strategically valuable, it is also a historic ally of Russia.

Russia’s imprint in Serbia is not insignificant. In October 2009, Russian President Dmitry Medvedev made a much-publicized visit to Belgrade, where he offered a €1 billion (us$1.4 billion) loan to the Serbs and openly discussed the possibility of a strategic partnership with Serbia. The next month Russian Foreign Minister Sergei Lavrov visited the region, where, according to the Eurasia Daily Monitor, he encouraged the governments of Bosnia-Herzegovina and Serbia “to oppose U.S.- and EU-proposed constitutional and economic reforms” (Nov. 9, 2009).

Russia keeps a keen eye on developments in Serbia and the Balkans. When violence broke out last week between nato forces and Kosovar Serbs, the Kremlin was quick to rally to Serbia’s defense. Speaking to the Russian news agency RT, Dmitry Rogozin, Russia’s nato envoy, warned: “It seems my nato colleagues don’t have a clue what the consequences of their involvement in the conflict could be. Instead of taking a neutral position in accordance with the UN Security Council resolution, they took the side of Kosovo-Albania.” Additionally, Rogozin demanded that nato investigate the incident and reminded nato that Moscow would support and protect Serb civilians.

Rogozin also warned nato, saying that it was making a mistake by “provoking another conflict in the Balkans.“

Having Vladimir Putin’s Russia as an ally gives Serbia plenty of leverage. The recent reestablishment of Putin, an aggressive, ambitious strongman who considers the demise of the Soviet Union the “greatest tragedy of the 20th century,” as future president is a sign of Moscow’s trajectory. And there’s little doubt that Russia, as it hunts for and exploits opportunities to establish itself as a regional and even global force, will remain intimately involved with Serbia.

Although Serbia has aspirations of EU membership, don’t be surprised if Belgrade opts to play its Russia card. There’s no doubt that a threat by the Serbs to turn away from Europe and embrace Moscow, perhaps allowing the Kremlin to set up shop in the Balkan Peninsula, would get the attention of Germany and Europe.

The more the German-led EU and Russia tinker in the region, the likelier it is that their ambitions will collide. Should this begin to happen, Europe and Russia will have two options. The first would be to sit down together, debate their strategic interests, and carve up Eastern Europe and the Balkans between them—much like Hitler and Stalin did in 1939. The alternative would be to allow the tension to mount until it erupts in armed conflict. Under Putin it’s possible the Kremlin, if Germany and Europe get too aggressive in the Balkans, might send a shot across the bow of Europe. A provocation by the Kremlin of a military or energy crisis in a place like Serbia, or maybe Ukraine, would certainly caution Berlin and Brussels against ignoring the strategic interests of its eastern neighbor. This would without doubt bring Germany and Europe to the negotiating table.

Whatever happens, both history and Bible prophecy demand we pay attention to this region. Notice what Trumpet editor in chief Gerald Flurry wrote more than a decade ago, after the German-initiated breakup of Yugoslavia in the 1990s: “Once again the Germans are structuring an empire. … Some of the best foreign-affairs analysts are beginning to wake up to what is happening in Europe—and it all started in the Balkan Peninsula. … Europe has effectively conquered Yugoslavia!”

Ultimately, this is why we must give attention to the Balkans. The conquering of this region by Germany and Europe is a harbinger of the future. It’s a sign of Berlin’s larger imperial aspirations! To understand this more thoroughly, read The Rising Beast—Germany’s Conquest of the Balkans. One of the mainstream media’s most egregious acts during the 1990s was its terribly misleading reporting on what exactly was happening in the Balkans, and who exactly was behind those horrible events. The Rising Beast sets this history straight!

It explains the truth, which is that former Yugoslavia “is in fact the first victim of World Wariii.”