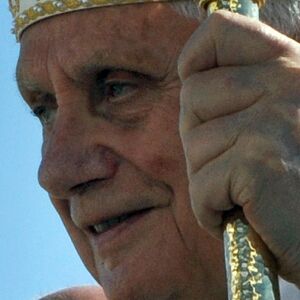 The Vatican’s history with Germany demands we keep a close eye on these two.

Pope Benedict xvi arrived home Sunday from a whirlwind four-day tour through Germany. Apparently the trip was a success, but not a rip-roaring, bring-the-house-down history-making event. “The pontiff put on a good show, but failed to electrify his audience,” was the way Spiegel Online put it.

Reading the mainstream media, one gets the distinct impression that the Vatican is a spent force. The pope, we’re led to believe, is a relic—more a popular curiosity than a serious, influential leader—who spends his days casting pearls before swine drunk on materialism and secularism.

At the Trumpet, our take on Pope Benedict and the Vatican is the precise opposite. For years, even decades now, we have explained to our readers that the Catholic Church will play a central role in the creation of a German-led European superstate. We’ve told readers to expect a Vatican-German alliance to develop, and to watch closely as this church-state combine forms. This forecast is rooted primarily in Bible prophecy. But it’s also rooted in the history of German-Vatican relations—and not just early history like that of Charlemagne, Otto the Great and the Habsburgs.

Most have forgotten today, but the Vatican was central to the rise of the Third Reich.

Take Eugenio Pacelli, the man who became Pope Pius xii, otherwise known as “Hitler’s pope.” Some are aware that Pope Pius xii turned a blind eye during World War ii as Italian Jews were driven past his doorstep in Rome, crammed into trains and dispatched to extermination camps in northern Europe. Some few know about the Vatican ratlines, the Catholic-controlled network through which key Nazi officials were smuggled out of Europe at the end of the war.

Very few, however, remember the role this Vatican official played in the rise of Nazi Germany.

It’s a remarkable history—one we must keep in mind.

As Benito Mussolini’s grip on Italy tightened during the 1920s, he proclaimed the Holy Roman Empire restored. In February 1929, Mussolini signed a pact with the Vatican, making Roman Catholicism the only recognized religion in fascist Italy. This agreement, known as the Lateran Treaty, delighted Pope Pius xi, who spoke of Mussolini as “a man sent by Providence.”

The creation of the Lateran Treaty had enormous impact on another budding authoritarian, a man determined to follow Mussolini’s example. Just days after the signing of the Lateran Treaty, Adolf Hitler wrote an article for the Völkischer Beobachter praising the agreement. Hitler held no political office at the time, but as he witnessed the role of the Vatican in Mussolini’s rise he realized the tremendous importance of having the Catholic Church as an ally. Like Charlemagne and emperors of the Holy Roman Empire before him, Hitler knew he needed the support of the Vatican if he was to exercise full control over Germany, Europe and eventually the world.

Enter Eugenio Pacelli. Pacelli was the papal nuncio (ambassador) to the German state from 1918 to 1930. In February 1930, Pacelli was appointed the Vatican’s secretary of state and moved back to Rome. As secretary of state, Pacelli’s primary goal was to sign an agreement with Germany. Thanks to his 11 years living in Germany, during which he developed a network of contacts and became intimate with the political machinations of government, Pacelli knew exactly which strings to pull to achieve his goal.

Almost immediately, Pacelli set about endorsing the Nationalist-Nazi-Catholic coalition that brought Hitler to the German chancellorship. For example, after he moved from Bavaria to Rome to take up his responsibilities as secretary of state in February 1930, Pacelli started spending time in the company of Monsignor Ludwig Kaas, a former Catholic priest and the leader of Germany’s Center Party, the nation’s Catholic party. Together, Pacelli and Kaas drafted a Reich Concordat, a formal treaty between Germany and the Vatican, and discussed strategies for bringing a government to power in Berlin that would look favorably on this concordat. Both Pius xi and Cardinal Pacelli encouraged Kaas and the Center Party leadership to explore the advantages of cooperation with the Nazis.

By the time Germany’s governing coalition fell apart in January 1933, Pacelli and his allies were ready to make their move. It was Catholic Center Party Deputy Franz von Papen who persuaded German President Paul von Hindenberg to grant Hitler the chancellorship of a Nationalist-Nazi-Catholic coalition in which Papen was to be vice chancellor.

In January 1933, thanks largely to the meddling of Cardinal Pacelli, Hitler was installed as Germany’s chancellor!

Although chancellor, Hitler was still handcuffed by Germany’s democratic rules. In an effort to circumvent democracy and establish his authoritarian rule, Hitler thrust the Enabling Act—an act that would grant him supreme, unchecked power—before the German parliament. At that point, all that stood between Hitler and dictatorship was the Center Party (predominantly Catholic) and the German National People’s Party.

Thankfully for him, Ludwig Kaas, an influential voice in the Center Party and long-time instrument of Pacelli and the Vatican, immediately embarked on a campaign to convince Center Party politicians to vote “yes” to the Enabling Act. On March 23, after a few weeks of campaigning, Hitler and Kaas stood before the Reichstag and implored politicians to support the Enabling Act. The plea was successful. When the Reichstag voted later that evening, the Center Party, followed by every political party except for the Social Democrats, voted yes.

It was remarkable; democracy had signed its own death warrant. On March 23, the Reichstag granted Hitler the power to pass laws and make treaties without the future consent of the government—or anyone else in Germany!

Once again the Vatican, particularly via Kaas, was essential in furthering Hitler’s ambition for supreme control of Germany. In fact, the day after the Enabling Act passed, Kaas visited Pacelli in Rome, where he, in his own words, “investigate[d] the possibilities for a comprehensive understanding between church and state.” As soon as he took office, Hitler showed his gratitude to Pope Pius xi and Cardinal Pacelli by forming a peace pact—the first of the Third Reich—with the Vatican.

Cardinal Pacelli and German Vice Chancellor Franz von Papen signed the historic Reich Concordat on July 20, 1933—less than four months after Hitler was officially granted the powers of a dictator.

In his book Adolf Hitler, author John Toland recalls the Vatican’s enthusiasm for entering into a relationship with the Third Reich. “The church agreed to keep priest and religion out of politics while Hitler, among other things, granted complete freedom to confessional schools throughout the country, a notable victory for German Catholics. His Holiness welcomed Hitler’s representative, Franz von Papen, most graciously and remarked how pleased he was that the German government now had at its head a man uncompromisingly opposed to communism and Russian nihilism in all its forms.”

Though it was early in his reign, Hitler had made public his disdain for Jews, his disregard for democracy and even his larger ambition for conquering Europe. In spite of all this, the Vatican was quick to endorse Hitler’s dictatorship.

“The Vatican was so appreciative of being recognized as a full partner that it asked God to bless the Reich,” Toland writes. “On a more practical level, it ordered German bishops to swear allegiance to the National Socialist regime. The new oath concluded with these significant words: ‘In the performance of my spiritual office and in my solicitude for the welfare and interest of the German Reich, I will endeavor to avoid all detrimental acts which might endanger it.’”

When you read this history you have to wonder: How successful would Hitler’s Nazi Party have been without the support of the Catholic Church?

In 1935, Heinrich Brüning, the man who in May 1932 had been squeezed from the chancellorship by Hitler and his supporters, revealed who he believed was primarily responsible for the alliance between the Nazis and the Vatican. “Behind the agreement with Hitler stood not the pope, but the Vatican bureaucracy and its leader, Pacelli,” he said. “He visualized an authoritarian state and an authoritarian church directed by the Vatican bureaucracy, the two to conclude an eternal league with one another.”

Many today have trouble admitting Hitler’s connection with the Vatican. Nevertheless, it is true: Without the support of the Vatican, Hitler very likely would never have gained supreme power over Germany. It was the same with Charlemagne, Otto the Great and the Habsburgs. Germany and the Vatican have a history of working together to subjugate Europe.