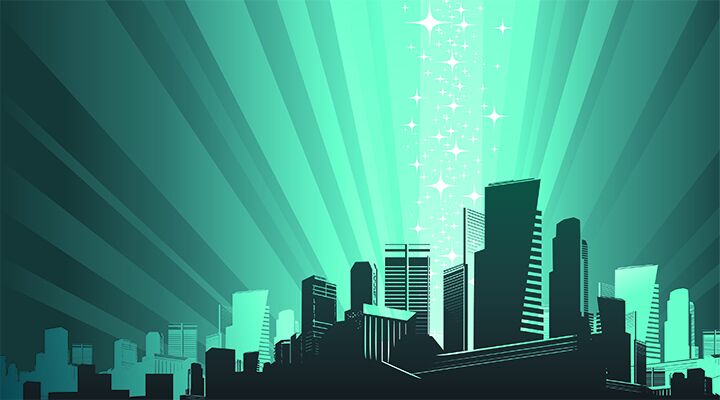 If you were God for a day, what kind of energy would you choose to power civilization?

Looking at the planet God created, the choices currently being exploited seem few and largely unappealing. Oil, natural gas, coal: These provide an enormous amount of energy, but are terribly polluting and non-renewable: finite—here today, gone forever. Already the world is confronted with “peak oil”: On both an absolute and per capita basis, the amount of oil to run the world’s economy is declining. Global recession has reduced oil demand over the past three years, thus temporarily avoiding the effects of $5-per-gallon gasoline—and $5-per-loaf bread. But our reliance on a finite resource to power a growing society is obviously problematic and unsustainable. We are approaching a crisis point. Demand is outpacing supply, and some scientists say a crisis is coming sooner than we think—or that it has already begun.

Thus, many people are looking to renewable energy sources to stave off economic and societal collapse. But they face an incredible challenge.

As Peter Haug, secretary general of the European Nuclear Society, pointed out years ago, most experts agree that technical limitations prevent renewable energies like wind, solar, hydrothermal and geothermal power from ever providing more than 15 to 20 percent of the world’s energy needs.

The best rivers and lakes are already dammed. Windmills are becoming more efficient, but still struggle to produce electricity at rates comparable to fossil fuels. Solar technologies are capturing, concentrating and storing ever more of the sun’s energy; economies of scale are kicking in and costs are coming down—but still, solar doesn’t come close to the return on energy investment of coal or natural gas.

The green revolution is a dud so far—even from an economic perspective. As the Los Angeles Times recently said, “The ‘greening’ of the country, including the creation of green jobs, has proved unworkable and expensive.” Even the New York Times admits that government records show the effort to stimulate green jobs has “largely failed.”

But that doesn’t mean we shouldn’t try. The world desperately needs a source of clean, abundant, inexpensive energy.

If it could find one, it would revolutionize the lives of everyone on the planet.

So what would you do to solve the world’s energy problem? Instead of asking yourself what you would do if you were God, why not consider what God did do?

A Source of Limitless Power

Put on some sunglasses. And look up.

Harnessing the power of the sun, the energy of the stars themselves, has been a goal of both scientists and dreamers for centuries. And today we are scratching a little deeper than the surface, with huge advances being made in a field of physics, developments once thought to be closer to science fiction than science.

But what if instead of just harvesting the rays of the sun that make it to the surface of the Earth, the physics behind the sun’s incredible energy output could be replicated here? What if scientists could imitate the sun fusion process and cause two hydrogen nuclei to combine together to create helium, giving off colossal amounts of heat energy in the process?

Scientists are already doing it—albeit on a much smaller scale, and for very short periods of time.

Best of all, the hydrogen needed to power this reaction can be obtained from the oceans—the largest geographical feature on the planet.

Commercial fusion has some governments and private investors salivating. When professors Stephen Hawking and Brian Cox were asked to name the most pressing scientific challenge facing humanity, they both gave the same answer: producing electricity from fusion energy. The prize? A source of clean, inexpensive, limitless energy to power human development for centuries.

Now—there is a catch, and it is a big one. Replicating what happens in the heart of a star isn’t an easy task. Governments have spent billions trying to do it, and the best they can show for it is the ability to produce and sustain 16 million watts of energy output—for one second.

Producing energy for a second may not sound like much, but consider that back in the 1970s the best that could be achieved was one tenth of a watt, produced for a fraction of a second. That is a billion-fold increase, notes the New York Times. So we are definitely heading rapidly in the right direction.

While the physics of nuclear fusion is well understood, the engineering requirements to control the process are very challenging. For example, how do you handle the gas-like hydrogen plasma formed by the colliding hydrogen nuclei when it routinely reaches 150 million degrees centigrade? It literally melts away anything it touches.

But advances in technology are now close to overcoming this problem. Some scientists are using advanced magnets to suspend the almost unfathomably hot plasma in mid-air, so it touches nothing; these magnets even enable them to deftly manipulate the stuff. Other scientists are using lasers to control how many hydrogen atoms are allowed to fuse, vastly lowering temperatures.

Challenges remain, but a race is on. The ability to build minivan-size suns able to supply the energy needs of whole countries for millennia holds the potential to change the world forever. If used properly, this alone could virtually eliminate poverty. Imagine each nation being energy self-sufficient, not polluting, not reliant on imported oil, not gifting enormous cash flow and disproportionate influence to despotic regimes. It would be a radically different world. It is a worthy dream.

It is an aspiration that the European Union, China, India, Japan, Russia, South Korea and the United States have all teamed up to work toward. The goal is a working fusion power plant prototype by 2020.

“Now some people are cynical about that,” says Michio Kaku, professor of theoretical physics at City College of New York. “They say, ‘Hey, give me a break. We’ve been there. We’ve heard the claims. Every 20 years they say that fusion is 20 years from now. Twenty years come, and we’re still no closer to fusion.’ There is a difference. This time we physicists think that we have the technical problems licked.”

The prize is enormous: The sun produces enough energy in one second to power the world’s current needs for a million years.

This is not to say that other clean energy technologies will not be part of the future. Geothermal energy, for example, seems to hold a lot of potential. Wind and hydropower may have roles too. Only God knows exactly what type of exciting, undiscovered, clean energy sources, the future holds.

But rest assured, the Creator of the material universe has locked within it an enormous amount of energy, and once His Kingdom is set up on Earth, mankind will be given the opportunity to unlock and harness it.

It is dazzling to think about what the world would be like with virtually unlimited amounts of inexpensive, nonpolluting energy.

The Bible describes a future when the world will not face energy shortages. This thousand-year period, described in Isaiah 11 and Micah 4, commonly referred to as the Millennium, is described as a time of peace and abundant prosperity. It is a period in which God will directly help mankind solve its problems.

This utopian time, depicted in Zephaniah, will also be a time of one language. Scientists will then be able to truly collaborate on blazing, Earth-changing advancements. And it will be a time of cooperation, not competition. As physicists from each nation understand and implement God’s physical laws, these awesome advancements will be shared with all.

Scientific understanding will be illuminated like never before. “They shall not hurt nor destroy in all my holy mountain: for the earth shall be full of the knowledge of the Lord, as the waters cover the sea” (Isaiah 11:9).

Look forward to that dazzling day. Glittering cities with light to spare; zero-pollution, high-speed transportation systems; clean, powerful industries—and who knows what else we might achieve, living in accordance with God’s awesome laws? Stay hopeful. That incandescently happy time is coming soon.