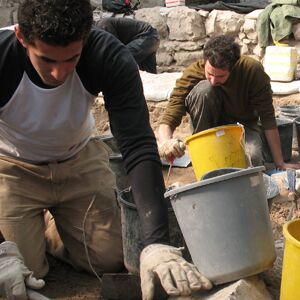 The ancient city of Tel Qarqur is ground zero for an amazing account of Middle East and Bible history.

The ancient city of Tel Qarqur has an amazing story. For the past three decades, archeologists have been excavating the deserted remains of what to the untrained eye might appear to be a giant pile of dirt. But to scientists, that mound of rubble in northwest Syria is a unique treasure trove.

Tel Qarqur has an astounding history. For instance, in 1861, at a site in Turkey, archeologists unearthed the now famous Kurkh monolith. The large stone monument describes Tel Qarqur as the site of a great battle between Shalmaneser, king of Assyria, and an alliance of 12 coastal kings. Included on the list of kings was Ben Hadad of Damascus and “Ahab the Israelite”—both of biblical fame. According to the stone’s text, King Ahab, fighting with 2,000 chariots and 10,000 soldiers, was second-largest member of the resistance opposing the Assyrians.

Although this specific battle is not recorded in the Bible, Ahab’s association with Ben Hadad is well known. In 1 Kings 20, the Bible describes how God miraculously intervened to help Ahab completely destroy two of Ben Hadad’s larger invading armies. After Ben Hadad humbly begged Ahab to spare his life, Ahab made a treaty with him and set him free. It was most likely after this time that Ben Hadad and Ahab joined forces to fight the Assyrians.

But the ancient city of Tel Qarqur is also famous for its much earlier, much more intriguing history.

Over the years, archeologists have discovered large fortifications, a temple complex, baths, small decorative figurines and various types of pottery at the site. Today, using ground-penetrating radar, scientists are documenting the existence of large, sprawling residential and other structures surrounding the city center. But it is not these finds in and of themselves that make Tel Qarqur so unique.

What makes Tel Qarqur so unique is that these finds—including the extensive residential structures—are dated to 4,200 years ago.

Four thousand, two hundred years ago is an interesting date for three reasons. First, scientists note that 4,200 years ago ancient civilizations across the Middle East experienced sudden, dramatic collapse. From what is now Iran, through the Tigris and Euphrates river systems, to Syria and down the Mediterranean coast to Egypt, a massive depopulation occurred. It was a time of great mass migrations, as people headed out in just about any direction they could.

“There was widespread abandonment of many of the largest archaeological sites and ancient cities in the region and also large numbers of smaller sites,” says Jesse Casana, professor of anthropology at the University of Arkansas.

It was shortly after this time that the Akkadian Empire disintegrated. About 4,300 years ago, the Akkadians held sway over the region known as the Fertile Crescent—an area encompassing the Tigris and Euphrates rivers, the region north and west into modern-day Syria, and the area down south into the Jordan Valley and modern-day Israel. Famous cities, such as those listed in Genesis 10:10 (Babel, Erech, Accad and Calneh), all belonged to the Akkadians. The city of Accad was an important population center.

The Akkadians were an aggressive and expansive people that assimilated the Sumerians and were known for starting wars with neighboring territories.

For thousands of years, the fertile Mesopotamian region was a network of highly productive, organized, agriculture-based urban centers, notes Harvey Weiss, professor of Near Eastern Archeology at Yale. By 4,300 years ago it was dominated by the Akkadians. Then a hundred years later, “the region’s new urbanites abruptly left their homes and fled south, abandoning the cities for centuries to come” (Discover, March 1998).

So, for around 100 years (4,300 to 4,200 years ago), the Akkadian Empire flourished. Then it mysteriously and suddenly collapsed. For some reason, Tel Qarqur was an exception to the rule, growing and even expanding. (Some scientists think it was because Tel Qarqur’s main river system derived its water from a stronger underground “karst” water supply.)

For many years, scientists have been puzzled over the collapse of the Akkadian Empire. Some have attributed it to political disintegration, or incompetent administrators. Others to invasion by hostile tribes, or disruptions in trade routes. But for the most part, scientists have never really understood what caused this rapidly growing empire to experience such a dramatic population decline, and why it led to the wholesale abandonment of previously prosperous cities throughout the whole region.

Today, some scientists have another theory as to why the Akkadian Empire collapsed so quickly. This is the second reason 4,200 years ago is an interesting date.

Scientists are now discovering that about 4,200 years ago the Middle East was suddenly rocked by widespread drought—one that sent people fleeing an onslaught of hot wind and even dust storms. The drought lasted for about 300 years.

“At 4,200 years ago, there was an abrupt climate change, and abrupt drying, and abrupt deflection of the Mediterranean westerly winds that transport humid air into the eastern Mediterranean region,” says Weiss. Rainfalls were reduced by somewhere between 30 and 50 percent.

Soil deposits at abandoned settlements, lake sediment cores, and even stark abnormalities in glacial ice all indicate an abrupt and dramatic change in climate at this time, says Weiss.

It was this drought that caused the Akkadian’s rain-based agricultural society to collapse, argues Weiss. And even cities like Ur, which practiced irrigation agriculture, would have been affected, because their large populations made them dependent on food imports from northern cities like Nineveh.

With falling food production, populations were forced to migrate elsewhere, and thus we have widespread archeological evidence showing cities across the region being abandoned and depopulated for the next 300 years.

Some scientists, however, are not convinced that climate change was the main cause for the collapse of cities in the Middle East. Conventional wisdom says that these civilizations, with their large grain storage structures, advanced trade systems, and institutions of government and taxation would be immune or at least highly resistant to natural disaster.

And why would it happen abruptly?

But what these scientists, and even Harvey Weiss, don’t understand is that there was another perhaps even greater force that caused people to abandon the cities of Akkadia 4,200 years ago.

Bible scholars know that something else dramatic and sudden occurred approximately 4,200 years ago: the rise and fall of Nimrod.

Genesis 10:8-10 relate how Nimrod became a “mighty one in the earth,” and began consolidating people within walled cities and developing the world’s first empire. In verse 10, it lists the cities of his empire: “And the beginning of his kingdom was Babel, and Erech, and Accad, and Calneh, in the land of Shinar.” Historians have since named Nimrod’s empire as the Akkadian Empire, after Nimrod’s city of Accad, which was a powerful center at this time.

But the Bible also tells why the Akkadian Empire (Nimrod’s empire) collapsed so suddenly.

During Nimrod’s day, everyone spoke the same language (Genesis 11:1). Thus society and technology were advancing at a rapid pace—but they were not good advances. Specifically, at the city of Babel, people were trying to build a tower so high that God would not be able to destroy the Earth with a flood again. In verse 6, it says, “And the Lord said, Behold, the people is one, and they have all one language; and this they begin to do: and now nothing will be restrained from them, which they have imagined to do.”

As the Bible points out, God was behind the scattering of the Akkadians. God changed the people’s languages in order to cause them to migrate away from many city centers in the Fertile Crescent.

In a situation in which languages are suddenly changed, it is not hard to envision social, political and economic institutions quickly breaking down. Cities would have quickly become unmanageable.

An onset of a drought would only have hastened the exodus and prevented the return.

Once again, archeology confirms the biblical account of history. Nimrod, the scattering of the people, and thus the authenticity of the Bible are being confirmed by science—even before the scientists realize it.