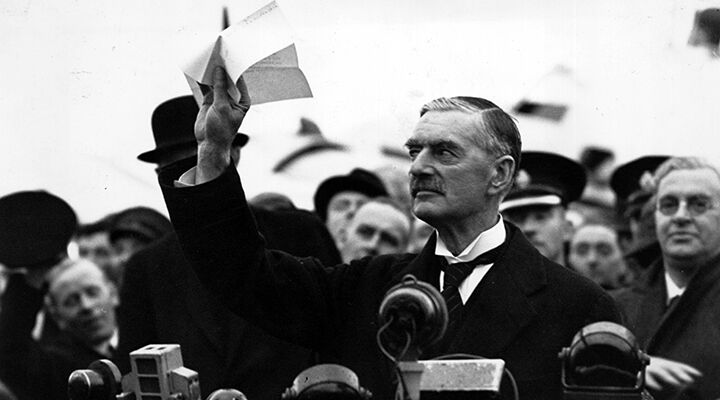 History shows that doing so can be fatal.

From the September 2011 Trumpet Print Edition

It is easy today to look back on the 1930s and marvel at Britain’s failure to take action to escape the calamity that was brewing in Europe. To think that if you were alive in the 1930s you would have read the signs and responded differently. If you think this way, though, you don’t understand human nature.

As each year passed in the 1930s, evidence showing that a massive catastrophe was inevitable became ever more plenteous and irrefutable. There were Hitler’s munitions factories; his steadily growing army; the führer’s own promises.

In March 1935, Hitler formally rejected the Treaty of Versailles. He announced the formation of the German Luftwaffe (air force) and conscription for all German youth. Winston Churchill warned that Hitler was putting Germany on a war footing. Despite the evidence, Britain slumbered.

Hitler invited British government officials to Berlin. He told them that the Reich had “reached parity with Great Britain as far as their respective air forces were concerned.” In fact, Hitler had been misinformed; he had overestimated the strength of the Royal Air Force by about 50 percent. Germany’s air force was actually much larger than Britain’s! Even once the disparity was revealed, however, the British remained apathetic.

On March 7, 1936, 22,000 German soldiers marched under the cover of fog and darkness into the Rhineland; by noon the military coup was complete. Hitler announced that he had “reestablished … the absolute and unrestricted sovereignty of the Reich in the demilitarized zone of the Rhineland.” Britain cringed—and did nothing.

In 1938, the Reich was again on the move. On March 11, while the German foreign minister was lunching with British Prime Minister Neville Chamberlain in London, German soldiers closed the border at Salzburg and began amassing troops along the frontier. Three days later, Hitler swallowed Austria. The British government, media and people trembled—and again fell back to sleep!

The night of Nov. 9, 1938, the world and German Jews in particular got another taste of what Hitler had in store. The number of acts of pillaging, rape and murder of Jews the night of Kristallnacht in unknown, but at the time it was the greatest pogrom in history. Yet, though Germany’s Jews were terrified, most chose to keep living in the jaws of the beast that would eventually devour them!

Soon it was apparent that Hitler had set his gaze on Czechoslovakia. By the end of 1938, the Sudetenland region had fallen to the German maw. By the following March, he had successfully devoured all of Czechoslovakia.

Finally in the spring of 1939, after years of Hitler churning out weapons, breaking treaties, invading neighbors and killing Jews, Britain began to muster a meaningful response. Even then, it wasn’t until Germany invaded Poland that September that all of Britain was convinced beyond question that war was upon them!

Years later, we look back and marvel at the stunning failure of Britain and the West to recognize the menace of Nazi Germany. We wonder that despite all evidence, they never took the threat seriously enough to respond with vigorous, meaningful actions—actions that might have prevented the calamity!

We marvel. But we are no different.

Consider the U.S. economy, for example. Signs abound that America is headed for a financial collapse of historic magnitude. The dollar is plunging in value. The national debt is almost 100 percent of gross domestic product. The U.S.’s biggest creditors are threatening to call in its loans; the Federal Reserve is creating fiat money out of thin air because America can’t find lenders. Russia, China, India, France and Germany all want a new reserve currency. Unemployment is stuck above 9 percent. Foreclosures are at or near historic highs, and banks are still taking people’s homes. One in seven Americans rely on food stamps to keep their children fed. Yet how many people are responding in a meaningful way?

Worldwide, commodity prices are rocketing: Oil is up over 50 percent from a year ago; oats and wheat more than 70 percent; silver, coffee and cotton over 100 percent. Food prices have risen 40 percent over the past year and are expected to go much higher. Today more than a billion people are undernourished.

Large-scale nature-related disasters are increasing. Across the planet, floods, droughts, earthquakes, wildfires and tornadoes are unleashing devastating violence on populated cities and key agricultural regions. At the same time, our world is filled with political unrest and upheaval, with government corruption and incompetence, with religious tension and wars. Inside our nations, daily news feeds reveal that once-stable societies are falling into lawlessness and violence. Gangs of rampaging teenagers are terrorizing neighborhoods. Unthinkable crimes are increasingly common. Racial and ethnic tensions are intensifying.

These are signs that our world is in a desperate state! Yet how many are responding in a meaningful way?

In 1935 Churchill, troubled by Britain’s apathy, stood before the House of Commons and attempted to shake the nation from its stupor. “When the situation was manageable it was neglected, and now it is thoroughly out of hand,” he warned. “There is nothing new in the story. It is as old as the Sibylline books. It falls into that long dismal catalog of the fruitlessness of experience and the confirmed unteachability of mankind. … Want of foresight, unwillingness to act when action would be simple and effective, lack of clear thinking, confusion of counsel until the emergency comes, until self-preservation strikes its jarring gong—these are the features which constitute the endless repetition of history.”

Seventy-six years later, Churchill’s warning applies even more! Chances are, you are making this very mistake.

But you can learn from this history. There are specific actions you can take to avoid the many and inevitable calamities that the evidence, and Bible prophecy, prove are coming upon this world. “Watch ye therefore, and pray always,” Christ says in Luke 21, “that ye may be accounted worthy to escape all these things that shall come to pass, and to stand before the Son of man.” Jesus Christ promises divine protection from these terrible disasters! To receive it, you must be vigilantly seeking God, continually watching the fulfillment of Bible prophecy and faithfully drawing close to God through prayer and Bible study. God says if you do this—if you put Him, His law and His work first—then He will provide a way of escape!