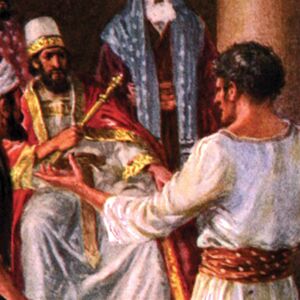 A lot closer to the truth, no doubt.

No book in the Bible has withstood more scholarly criticism than the book of Daniel. Most scholars would have you believe Daniel was a great fraud—that his book was a work of fiction. But that’s not what Christ believed—He referred to Daniel as one of the great prophets of the Old Testament (Matthew 24:15). In Jesus’s mind, Daniel’s prophecy was authoritative, and it applied to us today, in this end time.

In the mind of author James Carroll, on the other hand, the book of Daniel was “anonymously composed during the thick of the Maccabean war,” although it “pretends” to have been written much earlier.

It’s not like it’s uncommon for scholars to reject the Bible as God’s authoritative Word. But why won’t they just dismiss the book as a fraudulent work and walk away? Why is it so critical for them to put books like Daniel in another time period, as if composed by a phony?

They theorize about new time frames because of how accurate the books are prophetically!

According to Daniel 10:1, for example, the detailed prophecies of Daniel 10-12 were written in “the third year of Cyrus.” That means Daniel would have written this section of his book around 535 b.c., which is what makes the prophetic passage so remarkable. Daniel 10:10 through 12:4 is the longest single vision in the Bible. It covers, in great detail, about 400 years of history in the Middle East.

And Daniel wrote about all of it before it happened.

He wrote about Alexander the Great’s empire—and how it would split up into four divisions. He wrote about the violent clashes between two kings in the Middle East—and how these back-and-forth battles would culminate in the invasion of Jerusalem by Antiochus Epiphanes.

It’s so accurate and so precise that most scholars simply cannot believe it was written in the sixth century b.c. So they create totally implausible scenarios in order to remove the divine role God played in putting the Bible together.

According to Jewish tradition, Old Testament canonization was completed at about the end of the fifth century b.c. First-century Jewish historian Josephus confirmed this in his writings.

Yet scholars who reject the Bible as God’s inspired Word would have you believe that some fraud came along hundreds of years later, wrote a historical work, pretended it was written before the events actually happened, and then somehow managed to slip it into the already-canonized works of the Old Testament!

This “pseudo Daniel” would have had to convince those in charge of preserving the Old Testament works—Jewish authorities, the priests, Levites, etc.—that there was a totally new book that none of them had ever heard of and that it was actually written 400 years earlier, during the Babylonian captivity.

Or, maybe pseudo Daniel didn’t have to convince the Jewish authorities that he had stumbled upon an authentic prophetic work from the Babylonian era. Maybe all of them knew it was a fake—and went along with the conspiracy in order to give the Scriptures more “credibility.”

Added to that, scholars would have you believe, no one knew about the conspiracy for nearly two millennia—not until modern scholars were finally able to set the record straight! Never mind those ignorant scholars of old.

Josephus tells us that when Alexander the Great came to Jerusalem (in the fourth century b.c.), he was shown Daniel’s book and even he accepted that he had fulfilled the prophecy! Josephus wrote, “And when the book of Daniel was showed him [Alexander], wherein Daniel declared that one of the Greeks should destroy the empire of the Persians, he supposed that himself was the person intended; and as he was then glad, he dismissed the multitude for the present, but the next day he called them to him, and bade them ask what favors they pleased of him” (Antiquities,xi, viii, 5).

Notice Daniel 11:4: “And when he [Alexander] shall stand up, his kingdom shall be broken, and shall be divided toward the four winds of heaven; and not to his posterity, nor according to his dominion which he ruled: for his kingdom shall be plucked up, even for others beside those.”

Alexander’s reign was cut short in 323 b.c. by his untimely death at age 32. There was no one strong enough to rule the vast expanse of his kingdom. Thus, his kingdom was divided into four parts, each ruled by one of Alexander’s generals.

In Philip Myers’s classic volume Ancient History, he describes the fragmented state of the empire after Alexander’s death: “Besides minor states, four monarchies rose out of the ruins. Their rulers were Cassander, Lysimachus, Seleucus Nicator and Ptolemy, who had each assumed the title of king. The great horn was broken, and instead of it came up four notable ones toward the four winds of heaven” (pages 286–287).

Note that! Even Myers can’t help but draw attention to Daniel’s amazingly accurate prophecy, written 200 years before Alexander’s empire was divided among his four generals.

Problem is, Myers finished his work of history in 1904. And Josephus? He wrote in the first century. Plus, he was Jewish! Two strikes against him. And all those Jewish priests, Levites and governors responsible for preserving the canon of Scripture? They were duped by a fraud looking to make a name for himself. And the Maccabee writers who spoke of Daniel as if he was one of the prophets of old? What were they thinking? It was actually pseudo Daniel—and he was dwelling right there in their midst!

Maybe all of that happened. Or maybe we’ve drifted so far from God that our modern biblical scholars don’t know what they are talking about.

Some modern scholars reason around this by saying that pseudo Daniel spoke of the Medes and Persians as two separate empires, which conveniently makes the Greek empire the fourth and final one spoken of in the book. Daniel, though, specifically labels Medo-Persia as one empire, and then the Greco-Macedonians as the third, not the last.

That he wrote about so many historical events before they happened was blindingly obvious in the days of Josephus! Notice: “And indeed it so came to pass, that our nation suffered these things under Antiochus Epiphanes, according to Daniel’s vision, and what he wrote many years before they came to pass. In the very same manner Daniel also wrote concerning the Roman government, and that our country should be made desolate by them. All these things did this man leave in writing, as God had showed them to him, insomuch, that such as read his prophecies, and see how they have been fulfilled, would wonder at the honor wherewith God honored Daniel” (Book 10, Chapter 11; emphasis added).

No wonder God holds the Prophet Daniel in such high esteem, Josephus said! And no wonder, we might add, Jesus admonished us to understand the words of “Daniel the prophet.”

Speaking of Christ, Daniel 9 pinpoints exactly when He was to begin His earthly ministry. To modern biblical scholars, though, it’s totally illogical to say that a sixth-century, God-fearing prophet got it exactly right 600 years ahead of time. In their minds, I suppose it makes more sense to accept that a literary fake—a false prophet pretending to be writing in the sixth century b.c.—somehow predicted, 200 years in advance, the exact year of Christ’s messianic work.