Canada is publicly accepting illicit drug use and same-sex marriages. Does a policy of tolerance curb bad behavior? 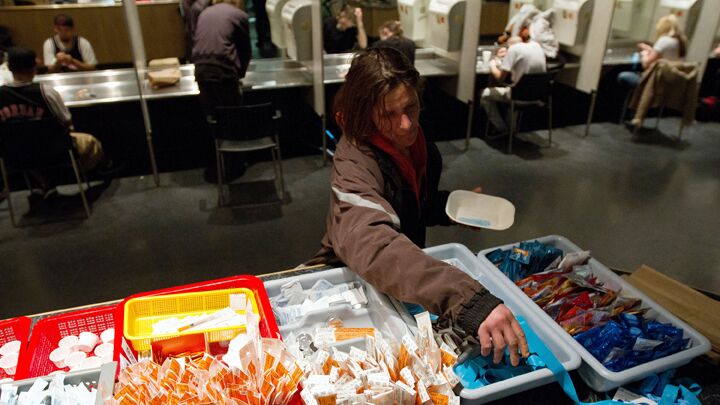 Canada is publicly accepting illicit drug use and same-sex marriages. Does a policy of tolerance curb bad behavior?

Canada once enjoyed a reputation as being morally conservative, compared to its giant neighbor to the south. Now that has changed. This country is rapidly taking a lead in North America’s moral decline.

In May, Canada proposed the decriminalization of the sale and consumption of small amounts of marijuana. In Toronto, Montreal and Vancouver, officials are already contemplating whether they should supply hard drugs, such as heroin, to addicts in an effort to combat the crime of drug pushing, stop the rampant spread of hiv and “save” lives.

The provincial government of British Columbia approved North America’s first “safe injection site” as part of “a three-year, $1.1 million pilot program … in [Vancouver’s] drug-ridden Downtown Eastside district” (Washington Post, Aug. 2). This governmental approval “includes exemption from prosecution under the Controlled Drugs and Substances Act” (ibid.). Although junkies have to purchase their own drugs, they will be exempt from arrest inside the clinic.

“‘This is a user-run safe injection site,’ said [Meagan] Oleson, a nurse. ‘Users decide what goes on here. My role is to supervise injections and to support them in doing that.’ … The official clinic is scheduled to open in September in another storefront that will look no different from other businesses in the area” (ibid.; emphasis mine throughout).

In yet another initiative, Canada jumped to the forefront in the moral slide of the West when it legalized same-sex marriages in June. This too, is presented as legitimizing what is, in effect, already general practice.

With such radical changes in moral standards, we need to ask, Where are these changes coming from, and why?

“Canada yesterday announced that it will start selling cheap pot to ill people seeking surcease from pain, becoming the first country in the world to supply so-called ‘medical marijuana’ directly to patients.

“Acting under court pressure, Health Canada—the federal ministry of health—said 1,650 baggies of marijuana are already packed and ready for sale to patients suffering from pain or nausea as the result of disease, chemotherapy used to treat cancer, aids, and other serious sicknesses. Marijuana also will be sold to people not expected to live more than a year” (Boston Globe, July 10).

The instigation for a change in law did not lie with the nation’s democratically elected Parliament, or with any other legislative body, but with the judicial system.

Another judicial intervention changing traditional law occurred when the Ontario Court of Appeal ruled on June 10 that the traditional definition of marriage between man and woman was unconstitutional. British Columbia’s Court of Appeal quickly joined Ontario in legalizing same-sex marriage—“ruling that gays and lesbians have an immediate right to tie the wedding knot. The three-judge panel ordered the ‘reformulation of the common law definition’ of marriage to declare it a union of two individuals, regardless of gender. Prime Minister Jean Chrétien, bowing to pressure from the liberal-leaning top courts, pledged last month to make gay and lesbian marriage the law of the land” (ibid., July 9).

It is mind-boggling how fast this moral revolution came upon the nation of Canada. Thirty years ago, Canadians were incarcerated for being homosexual. “As recently as 1994, a left-wing government in the province of Ontario introduced legislation that would have granted spousal rights to same-sex couples—and had to drop the idea when its own backbenchers mutinied. In 1995, the Supreme Court of Canada ruled in Egan v. Canada that a homosexual man who had cohabited with another could not claim his partner’s old-age pension because they were not ‘spouses’” (National Review, July 14). In less than a decade, the resistance to homosexual unions has crumbled.

Canada’s judges aren’t merely testing cases against the laws of the land, but are shaping new laws and drastically changing existing ones. How can this be possible in a democratic country?

“In 1982, Prime Minister Pierre Trudeau forced through a radical rewrite of the Canadian constitution that put vast new powers into the hands of the courts. The powers were all the greater because the new constitution was for all practical purposes unamendable—meaning that if the courts did something, it would be virtually impossible for anybody to undo it” (ibid.).

Why is this? And why has there been so little commotion about such disturbing mis-government?

These acts are seen by the world at large as acts of tolerance, extending “freedoms” and “rights”—but, in truth, curses and slavery will be the result of these decisions.

Canada was founded under the slogan “peace, order and good government.” Whereas the U.S.’s settlers were spurred on by religious freedom, as well as economic opportunity, Canada attracted settlers primarily in pursuit of fur and a trade with Asia. America grew to be a nation of influence on the world scene, culturally as well as economically and politically. It quickly shaped an identity for itself. But not so for Canada.

Ever since Europeans first occupied Canada’s territories, this nation—the second largest on Earth in terms of landmass, with tremendous natural resources, blessed beyond measure—has been struggling to figure out who it is. It seems as though recent events are creating an identity for Canada.

Toronto-based author Michael Adams wrote, “What emerges is a portrait of two nations evolving in unexpected directions: The once shy and deferential Canadians, who used to wait to be told by their betters what to do and how to think, have become more skeptical of traditional authority and more confident about their own personal decisions and informal arrangements. Americans, by contrast, seeking a little of the ‘peace and order’ that Canadians hoped ‘good government’ would provide, seem inclined to latch on to traditional institutional practices, beliefs and norms as anchors in a national environment that is more intensely competitive, chaotic, and even violent” (Fire and Ice: The United States, Canada and the Myth of Converging Values).

Adams went on to say that the U.S. is moving to adopt a more conservative stance. But is this true? Or does it only seem that way because, by comparison, Canada is dashing so much more rapidly in the opposite direction?

Canada is finding its identity by expressing “tolerance” while abolishing its respect for law and order, primarily the law on which the Canadian constitution was founded—British law, which traces its roots back to the Ten Commandments.

Morality on Its Way Out

After conducting a homosexual marriage ceremony within minutes of the Vancouver court ruling, United Church minister Tim Stevenson said, “This shows that we are a country that accepts people and tolerates all kinds of people who are engaged in diversity.”

The triumph of same-sex marriage in Canada parallels the collapse of marriage in the general population. Though the number of cohabiting couples increased by 20 percent between 1995 and 2001, the number of married couples increased by just 3 percent. Research shows that cohabitating relationships last only five years on average. Yet, this ever-accelerating trend has become a generally accepted idea in Canada. Traditional marriage is on its way out—so homosexual unions are much easier to accept.

No, tolerance of immorality will not create a stable, peaceful, happy society. True freedom and happiness come from strict adherence to laws that govern inter-human relationships, not the altering of laws.

The once-blessed nation of Canada consists primarily of the descendants of the ancient tribe of Ephraim (for proof, request our free book The United States and Britain in Prophecy). The people of Ephraim, with so many of their Israelitish brothers, have historically been rebellious and stiff-necked toward God and His ways. Prophecy shows us that Ephraim will have its blessings removed because of its tolerance of sin (Lev. 26:21, 25). Prophecy shows that the people of Canada will face captivity and slavery as just punishment for their national rebellion against God. That is where the tolerance of today is leading the nation.

We should never forget that God punishes only out of love and concern. It is correction for our good and is designed to bring about positive change. The coming Tribulation will shake people to their senses for what they have done.

But then will come deliverance. Jesus Christ will return to establish a new government, free from corrupt, liberal courts. Christ Himself will be the Judge, and the lawmakers of Canada will have to give account of their decisions.

Prophecy reveals what awaits us if we don’t repent. We can choose to learn this lesson the easy way—through obedience now—or the hard way to come if we fail to repent. You cannot afford to be indifferent about what is happening in a nation like Canada!